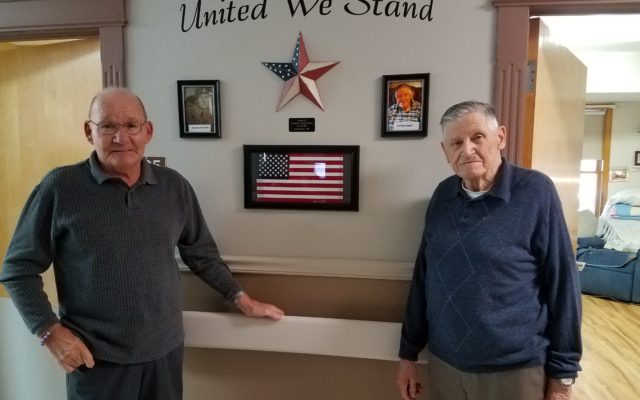 Wall of honor dedicated to veterans at memory care center

Jessica Potila, SJVT / FhF Staff Writer • November 17, 2017
Veterans living at St. Joseph Memory Care in Frenchville have been honored with a wall dedicated to them at the facility in appreciation of their service.

FRENCHVILLE, Maine —  Veterans living at St. Joseph Memory Care in Frenchville have been honored with a wall dedicated to them at the facility in appreciation of their service. The wall contains photos of residents Raymond Voisine and Patrick Daigle, both of whom served during World War II.

Brenda Thibeault, activities director at St. Joseph Memory Care, unveiled the wall at a celebration in honor of Voisine and Daigle on Thursday, Nov. 9.

The American Legion Riders of Post 147 in Madawaska designed and supplied items to place on the wall. Along with photos of Voisine and Daigle, the wall also holds a U.S. Flag and a star painted in red, white and blue. Above the photos is an acrylic rub of the words “United We Stand.” 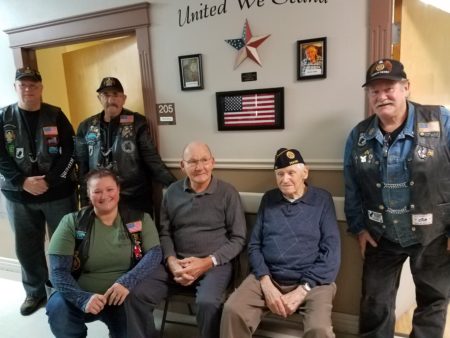 Members of the American Legion Riders Post 147 of Madawaska were instrumental in dedicating a wall of honor for veterans at St. Joseph Memory Care in Frenchville on Thursday, Nov. 9. Participating in the event are, standing, from left, Bob Gagnon, Bob Thibodeau, and Ed Ellis; seated, from left, Jen Collin, Raymond Cuisine, and Patrick Daigle. (Courtesy of Brenda Theriault)

Thibeault and her husband, Brian Thibeault, who is the maintenance supervisor at the memory care center put the wall together.

Several of the riders attended the unveiling, as did friends and family members of the two war heroes.

Oreen Daigle, Patrick Daigle’s brother, who also is a veteran, said at the event that he is proud of his brother, who served in the U.S. Navy during World War II.

“They served to protect our country and our democracy,” he said. “They did in all the wars actually.”

Voisine said he especially appreciated the visit from the American Legion Riders.

“I’m glad they could come down,” he said. “I used to be in a motorcycle group. I had an old bike. They don’t make them anymore.”

Patrick Daigle, originally from Quebec, served in the 22nd Regiment in the Canadian Army for five years during World War II.

“I was too young to go there,” he said, explaining that he enlisted when he was 16, but told recruiters that he was 17.

Daigle said he likes the new wall at the memory care center, and appreciates all veterans.

“Everybody needs them; without them, maybe we’d all be dead,” he said.

Photos of new residents who move to the memory care center and who have served in the military also will be added to the wall.

An upper-level low that has been bringing clouds and showers to the region will move east into the Maritimes today and tonight. High pressure will build in tonight into Thursday morning followed by a warm front Thursday night.
Our Sponsors END_OF_DOCUMENT_TOKEN_TO_BE_REPLACED