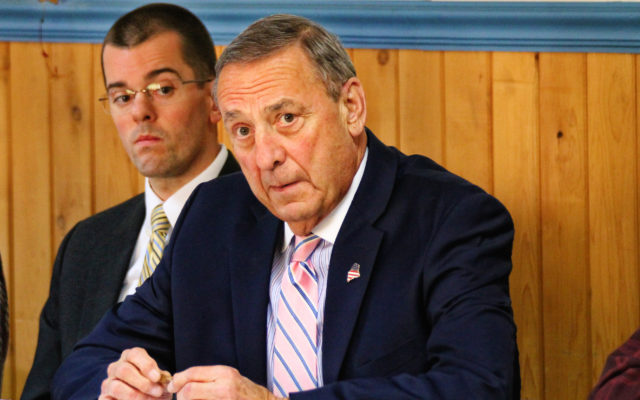 LePage and some of his staffers took questions from the crowd of nearly 80 mostly logging contractors and truckers gathered at the Sly Brook Sno-Riders’ club house, tucked in the woods just south of Soldier Pond.

Jackson, a former logger, opened the meeting  by stating that the governor had worked with him and other legislators on a bill that would have required employers to preferentially offer jobs to Maine and other U.S. workers.

LePage conceded that issues persist in the logging industry, but ultimately decided to veto Jackson’s legislation because it appeared to violate some of the tree growth stipulations based on an article of the Maine Constitution. The Senate upheld the governor’s veto in July and the bill failed. 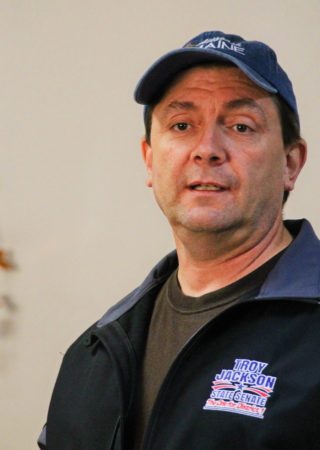 Sen. Troy Jackson, D-Allagash, speaks to a crowd of about 80 local loggers on Friday during a public meeting in New Canada with Gov. Paul LePage. (Don ENo)

Jackson has been at the forefront of legislative efforts and public comment about what some see as unfair trade and labor practices that put American logging contractors and truckers at a disadvantage with their Canadian counterparts.

Federal law allows businesses to hire foreigners when there is a shortage of American labor. Logging contractors make use of this provision, although the hospitality and agriculture industries hire the majority of such workers in Maine.

Companies must demonstrate a good faith effort to recruit and hire Americans, however, before they hire Canadian or other foreign workers. Loggers on Friday, told LePage that such good faith efforts are not happening.

Steven Hafford of St. Francis said many Canadian companies are “committing fraud,” when they claim they are trying to recruit American workers to fulfill their timber contracts. Hafford claims very few follow federal labor laws on this side of the border.

Until 2009, there were about 600 requests per year for bonded Canadian loggers,

according to the Maine Department of Labor, but today fewer than 100 such requests are made.

LePage commented that anyone seeing a worker or a company breaking labor laws should contact his office, instructing his staff at the table to make sure efforts are made to identify and hold accountable those companies that do so. 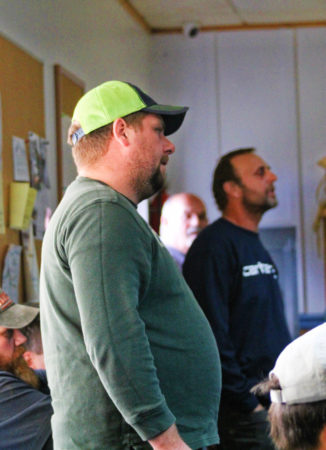 Mitchell Desjardins, left, and Steve Hafford, ask Governor Paul LePage questions and state grievances about what they see as unfair Canadian competition in the Maine woods industry, during a meeting in New Canada Friday. (Don Eno)

“I would love nothing more than to solve the logging issues and trucking issues with Canada,” the governor said, adding that federal laws and pending changes to the North American Free Trade Agreement, make doing that at the state level problematic.

Logging has been a part of Maine’s economic backbone since its founding. More than 4,600 individuals were directly employed in the state’s logging industry in 2014, according the Professional Logging Contractors of Maine, with an average annual pay of $42,795. Including its indirect effects, the total economic impact of logging in Maine was $882 million in that year.

The governor pointed out that most labor issues fall under federal laws and there is only so much the state can do. LePage said the current administration in Washington, D.C., seems more receptive to adjusting federal guidelines in order to benefit American workers.

LePage said there are opportunities now, as NAFTA is being renegotiated, to address the grievances about bonded Canadian workers and what some in the U.S. cite as unfair labor and foreign worker regulations.
When it comes to using state laws or creating new ones that do not run counter to federal laws to address the issues loggers and truckers are facing, LePage said he is “all in.”

Several people in the audience said there seems to be a lot of Canadian trucks bringing wood to Maine mills, while many American trucks sit idle.

“This summer (the mills) cut contracts,” said Jean Morin of Fort Kent. “A (Canadian) guy with a visa took my place.”

Canadian trucking contractors cannot pick up a load of wood in Maine and then drop it off at a Maine mill, unless they are working for a U.S.-based company and are bonded.

Yet, several in the audience claimed that happens regularly, with those at the mills turning a blind eye and no enforcement personnel around to do anything.

LePage said the agencies tasked with enforcing labor and immigration laws are lacking “intel” when it comes to stopping more of the abuses. 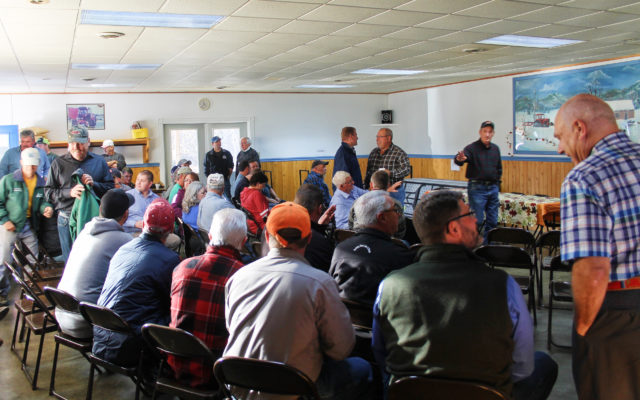 About 80 loggers and woods contractors squeezed into the small Sly Brook snowmobile club house in New Canada on Friday for a meeting with Gov. Paul LePage. (Don Eno)

“We still need the state to tell the fed when the laws are being broken,” Hafford said.

Mitchell Desjardins of Fort Kent commented that Canadian labor laws protecting their own workers on that side of the border are more strictly enforced than those on the U.S. side.

Desjardins, who said he is a dual citizen, told LePage that he has been told by Canadian officials that if he delivered another load of wood to a Canadian mill, his truck would be impounded.

“I have a right (as a Canadian) to work there,” he said, “Yet, they still threaten me.”

The governor pledged his support to put in place legislation that would prevent foreign companies from being able to bond workers in the U.S., if the company has been convicted of violating labor laws. 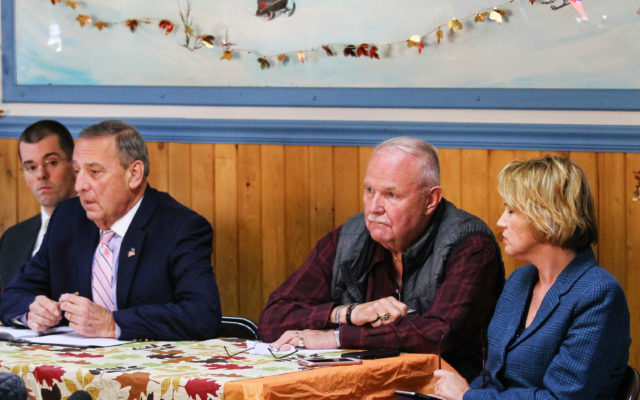 Gov. Paul LePage and some of his staff speak with loggers Friday during a public meeting in New Canada. Participating in the gathering are, from left, senior policy advisor Lance Libby; LePage; his forest products industry liaison, Rosaire Pelletier; and the governor’s press secretary, Julie Rabinowitz. (Don Eno)

“We can do that. There can be a statute on that. You have my support on that, 100 percent,” said LePage.

The governor also said his office would look into all of the roughly 80 bonded Canadian employees currently working in Maine, to ensure everything was done above board.

Several audience members expressed concern that Canadian workers are subsidized indirectly because they have government health care, paid maternity leave for their wives, daycare and other benefits, which they contend prevent U.S. workers and companies from being competitive.

LePage, however, largely dismissed this subsidization argument, saying the cost of fuel is much higher across the border and Canadian’s take home pay is much lower due to the high tax rates there.
“The exchange rate is in Canada’s favor, though,” the governor said. “It’s a big, big factor. There’s no question about it.”

The back and forth Friday made its way around to the topic of Maine’s tree growth tax laws, spelled out in Article IX, section 8 of the Maine Constitution.

“I have been working since 2011 to change the tree growth laws,” LePage said, contending that many smaller landowners are not following their management plans, leaving much of the wood unharvested.

The Maine Tree Growth Tax Law is designed to preserve commercial woodlots by giving property tax breaks to their owners.

Landowners may benefit from lower property taxes under the law, provided they “manage tree growth classified parcels according to accepted forestry practices designed to produce trees having commercial value,” the law states.

The larger industrial landowners are not a problem, LePage said, when it comes to abusing the tree growth statutes to avoid taxes.

Jackson, though, pointed out that the tree growth laws could be used to penalize those landowners, both large and small, that abuse or break other laws which negatively impact Maine loggers and wood haulers. 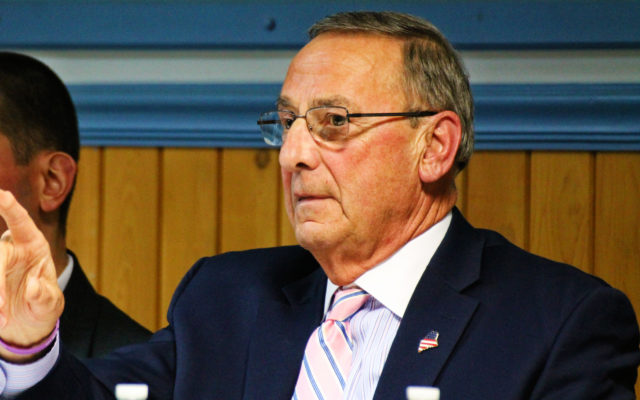 Maine Gov. Paul LePage answers a question Friday during a meeting with loggers and contractors in New Canada that was hosted by Sen. Troy Jackson, D-Allagash. (Don Eno)

LePage agreed that withholding tree growth benefits from those who break labors laws is a good idea. The problem, LePage added, is that the tree growth law is a provision in the Constitution and that putting in place such a punitive mechanism would require support from the Legislature.

“No one here is afraid to compete,” for work, said Brian Souers, who owns a forest management company in Lincoln.

“But, Canadian workers should have the same opportunities as American workers have in Canada,” which is to say, none, he said.

“I agree,” LePage said, conceding the playing field is not level.

While the governor found some common ground Friday, he cautioned that a combination of support from legislators and a willingness from federal agencies to work with the state, will be needed for any meaningful change to occur for Maine’s loggers.

Jackson reserved judgement on just how committed the LePage administration is to using enforcement actions to benefit Maine loggers.

In the fall of 2011, Maine Labor Commissioner Robert Winglass handed down fines totaling $25,000 against Canadian companies Les Transports Regi and Pepin Lumber for failing to notify state officials that they were employing foreign or bonded laborers in Maine.

However, weeks later, Winglass rescinded those fines after speaking with his staff and meeting with company representatives and their attorney, much to the ire of Jackson.

At that time the commissioner said the fines were overly harsh.

Monday, Jackson said the governor “needs to step up to the plate,” and follow up his words with action.

“I gave him the benefit of the doubt at the (New Canada) meeting,” he added.

Heavy snow is expected to overspread the Valley this afternoon and continue into the evening hours.
Crown Politics END_OF_DOCUMENT_TOKEN_TO_BE_REPLACED

Maine’s longest serving legislator, Martin was first elected to the Maine House of Representatives in 1964 when he was 23.
Our Sponsors END_OF_DOCUMENT_TOKEN_TO_BE_REPLACED