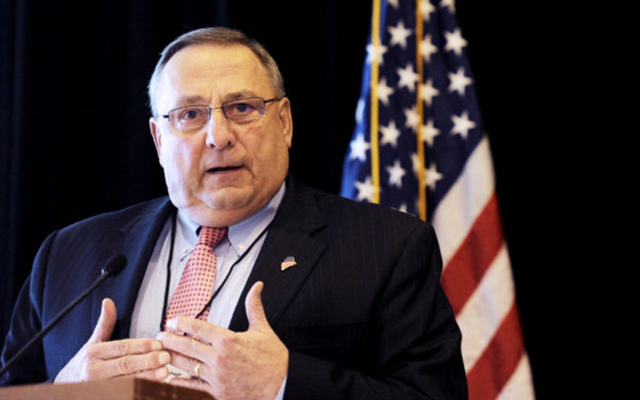 VAN BUREN, Maine — Gov. Paul LePage took issue with the response the Maine Public Utilities Commission gave to his inquiry, following the death of a Van Buren man, about the quality of cell phone coverage and wireless 911 availability in northern Maine.

In an Oct. 5 letter to PUC General Counsel Michael Tannenbaum, the governor referred to the commission’s response as not only “unsatisfactory,” but “callous and condescending.”

“To blame the death of Mr. [Arthur] Brissette on his phone’s battery strength, the terrain or the weather is unconscionable,” wrote LePage.

According to the regulatory agency, however, the PUC lacks the authority to order wireless providers to expand their coverage in given areas, so it is unclear what it could have done to prevent the tragedy. 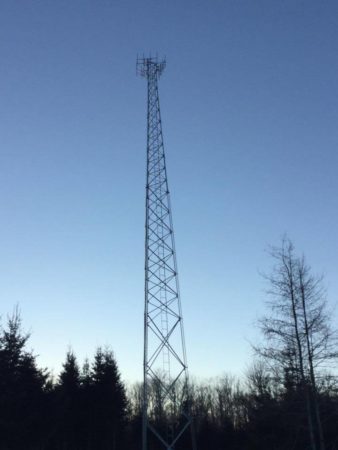 Boston-based Bay Communications, LLC, completed construction of this new 195-foot tall commercial telecom tower near Sinclair in January. It was anticipated that the company’s first client renting space on the tower will be a commercial cell phone carrier. The tower also will be available to help improve communications for local and regional emergency response and law enforcement agencies. (File photo | Don Eno)

Brissette died on the Madore Road in Cyr Plantation, located between Van Buren and Caribou, after his vehicle became stuck in a snowbank in stormy weather on Jan. 13.

According to Brissette’s widow, Lisa, her husband tried to reach her and emergency services more than a dozen times after getting stuck, but his cell phone failed to pick up a signal. After walking a half mile before finding help and then working to get the vehicle out, Brissette collapsed and died at the scene from a medical event.

Mrs. Brissette said that unreliable cellular telephone service added nearly a half hour to the response time of emergency medical services, who were unable to revive her husband.

In letters that she sent in June to LePage and U.S. Sens. Susan Collins and Angus King, advocating for improved cell service in the area, Lisa Brissette said she believes her husband would be alive today if not for the poor 911 wireless service available between Van Buren and Caribou.

“Even if there is no service in certain areas, 911 should always be available,” she wrote.

After reading her letter, the governor asked Public Safety Commissioner John E. Morris which agency could best evaluate the quality of 911 and cell phone connectivity in the Saint John Valley area. Because 911 service is a telephone/utility and falls under the limited regulatory purview of the PUC, Morris forwarded LePage’s query to the commission.

In his response to Morris, sent Aug. 10 via email and subsequently passed on to the governor and Brissette, Tannenbaum wrote “always perfect coverage is a theoretical or marketing concept.

“Rather than a single factor, it may have been a combination of factors that produced very weak or no reception of the gentleman’s 911 call by the cell provider’s towers in the area,” the PUC general counsel wrote.

“For a mobile phone user, the ability to connect to the wireless network depends on signal strength and line of sight range to the nearest cell provider tower,” wrote Tannenbaum. “Signal strength of a user’s handset can also be affected by battery strength and handset type or conditions of use, such as dense forest, inside buildings or beside buildings, and even weather.”

To blame Brissette’s death on such factors is “unconscionable,” wrote LePage.

“It happened because cellular coverage in that area is spotty, unreliable and often nonexistent.”

All wireless carriers in Maine are required to connect to the state’s 911 system and the PUC Emergency Services Communication Bureau works with them to determine routing for each cell site. However, calls need to first reach the 911 system.

While Maine does have a statewide Next Generation 911 system that interfaces with all telephone service providers, areas with less than ideal coverage do exist, Tannenbaum conceded in his response to Morris.

“In low density population areas, it is a business decision of the wireless company on how many towers to place for coverage, and where to point their directional antenna, and the company’s choices may leave weakly covered areas or even gaps,” he wrote.

Tannenbaum said the PUC was developing mapping that depicts cell towers and approximate coverage areas in Van Buren and Caribou and the surrounding communities.

On Monday, PUC Administrative Director Harry Lanphear said in an email to the St. John Valley Times that the commission does not currently have that comprehensive data, although such information likely is available from the Federal Communications Commission. The FCC does provide coverage maps on its website at https://www.fcc.gov/reports-research/maps/.

In northern Maine, any resident with a cell phone will know where the local dead spots are. Some are located on long stretches of state highway, while others are even in downtown areas.

Some new towers are occasionally put up, such as when Boston-based Bay Communications, LLC, erected one last winter in Sinclair. National carrier AT&T is expected to offer service from that tower.

But the Maine PUC “does not have the regulatory authority to order wireless providers to expand coverage with investments in a given area,” Tannenbaum wrote, as wireless providers are regulated by the Federal Communications Commission rather than any state agency.

Barry J. Hobbins, Maine’s Public Advocate, speaking to the St. John Valley Times via telephone early this summer, said his office also is unable to force wireless carriers to provide service. The Office of the Public Advocate’s primary responsibility is to represent the interests of Maine utility consumers.

In August, Sen. Collins forwarded Brissette a response her office received from the FCC. The commission’s chief of Public Safety and Homeland Security Bureau said the agency is committed to all residents having access to advanced telecommunications capabilities, especially in times of crisis.

The Brissettes’ “tragic experience highlights the vital importance of these issues,” wrote the FCC’s Lisa M. Fowlkes, although she made no mention of any program or rule that would entice or coerce carriers to add more cell towers.

Brissette said she would be following up with a formal complaint through the FCC’s Consumer Complaint Center, as Fowlkes suggested she do.

When she spoke with PUC Chair Mark Vannoy recently, Brissette said she was told to not get her hopes up that any changes would be made quickly, in terms of filling in cellular communication coverage gaps.

LePage said that as general manager of Marden’s, he frequently traveled to Aroostook and Washington counties, and that for years he experienced firsthand the “utterly inadequate” cell coverage in those areas.

“A lecture on the engineering of wireless technology is not the answer we need,” LePage wrote in chastising Tannenbaum. Rather, the governor said he is looking for solutions to provide “reliable and life-saving cell phone coverage in these underserved areas.”

The governor suggested to Tannenbaum that if he thinks there are no serious issues with cell phone coverage in the region, he should move his office to the area.

“As you are trying to make important business calls there, you will experience firsthand the extreme frustration of the people who live there,” LePage wrote.

When asked to respond to the governor’s criticism, Lanphear, the PUC administrator director emailed back to the St. John Valley Times, “First and foremost, the Maine Public Utilities Commission is deeply saddened by the tragic circumstances surrounding this unfortunate event. Our most sincere condolences go out to Mrs. Brissette and the family.”

He then added that, though the PUC agrees cell phone coverage in many rural parts of the state is inadequate, the commission does not regulate cell phone or cell phone towers, nor does it have the power to order wireless providers to invest and expand coverage in a given area.

In his original letter to the public safety commissioner, Tannenbaum did say that FirstNet, a new nationwide cell phone network primarily designed to help first responders communicate in emergencies, is being deployed over the next few years. Excess capacity on this system may help expand cell phone coverage in many rural areas of Maine, he added.

This is little comfort and too late for Lisa Brissette, who said she is hoping her efforts working with LePage and lawmakers will lead to improvements in the system.

Brissette said she is thankful the governor has taken an interest in finding answers to the problem.

“This won’t bring my husband back,” she said last week. “But, I hope it can help others in the future.”

Three candidates are vying for two seats on the Fort Kent Town Council. Voters will decide which of the three -- Corey Pelletier, Brandon Dayton or Andrew Caron -- will get a seat during the town’s annual election on Monday, March 22.
Apex Weather END_OF_DOCUMENT_TOKEN_TO_BE_REPLACED

A warm front lifting across the region this morning will lead to increasing clouds with snow overspreading the area later this morning. A cold front will move through this afternoon with snow likely for a period before tapering off behind the front this evening with overnight lows occurring relatively early around midnight.
Our Sponsors END_OF_DOCUMENT_TOKEN_TO_BE_REPLACED