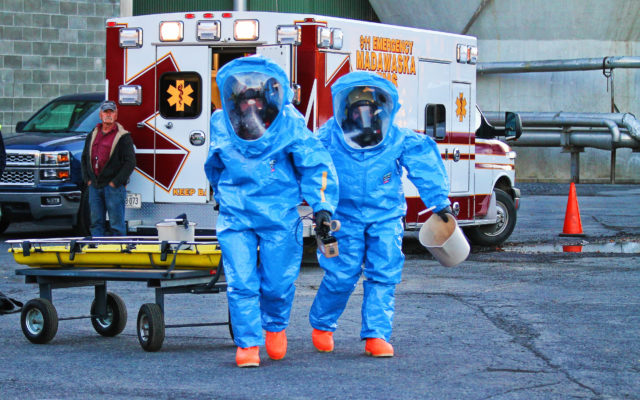 Don Eno, SJVT / FhF Staff Writer • October 20, 2017
Local firefighters and ambulance crews as well as members of the Maine National Guard and U.S. Customs and Border Protection took part Wednesday in a hazardous materials response training near the American side of the border crossing.

MADAWASKA, Maine — Local firefighters and ambulance crews as well as members of the Maine National Guard and U.S. Customs and Border Protection took part Wednesday in a hazardous materials response training near the American side of the border crossing.

The international bridge connecting Madawaska with Edmundston, New Brunswick, was closed briefly to allow responders to go through the border crossing portion of the scenario.

The drill simulated a scenario in which a person coming into the U.S. across the bridge was found to be carrying a package suspected of containing an unknown chemical or biological agent. In this training, agents inside the customs office were “exposed” and needed to be decontaminated. 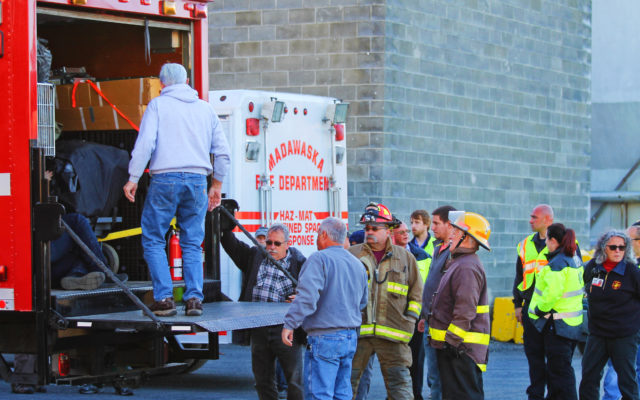 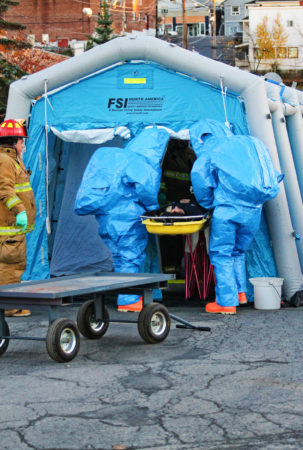 Responding to a hazardous materials call or one involving possible chemical or biological substances is different than heading to a run-of-the-mill house or car fire, he said Wednesday.

“As firefighters, we want to rush in and save people,” Soucy said. “But, with this stuff you can’t do that. We have to be very careful and it takes time.”

Among the responders Wednesday were members of Madawaska’s Hazardous Materials Response Team, which is one of eight Regional Response Teams in Maine called in such situations to support local fire departments and other responding agencies. The next nearest RRT is located in Orono. Members of these teams are trained and equipped to respond to chemical releases and to Weapons of Mass Destruction.

In addition to these RRTs, Maine communities and regions also have created Decontamination Strike Teams, designed to decontaminate people who have been exposed and to support the RRTs. Presque Isle and Houlton each have such strike teams.

Multiple trucks and trailers were parked in a nearby Twin Rivers Paper mill parking lot Wednesday as Madawaska’s hazmat team set up “hot and warm zones” and a portable decontamination facility. Two firefighters donned Level B chemical suits, while two others also suited up as backup.

Responders simulated retrieving a victim safely from inside the custom building and taking the victim to the decontamination tent.

With a large manufacturing facility like the paper mill in town and an active rail line that regularly carries fuel and chemicals of various kinds, Soucy said he is aware of the importance of having a hazmat team nearby.

“We are lucky to have the protection we have around here,” Cyr said, referring to not only the emergency response personnel, but also the number of federal border agency officers who are available when needed. 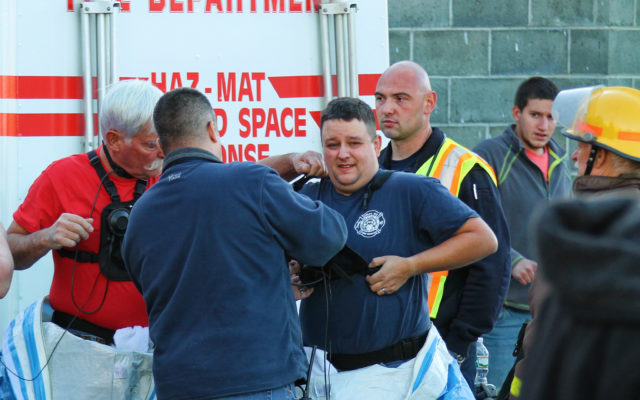 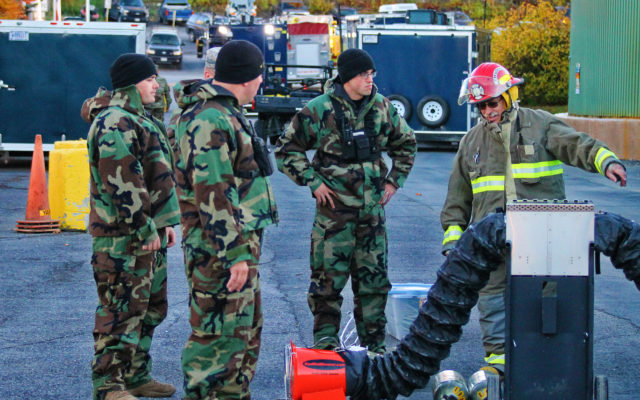 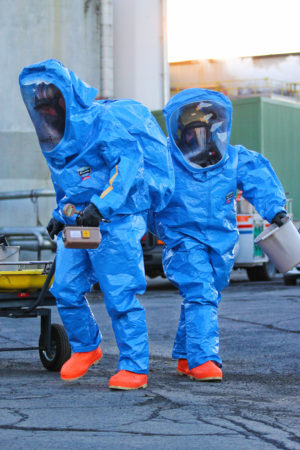 “Their trucks are full of all the good stuff. It’s something to see,” Soucy said.

Regional Response Teams like Madawaska’s are not designed to identify the suspected chemical or biological agent. The military, however, has the equipment and training to do so, and that is part of what was simulated Wednesday.

“It was  a great learning experience,” said Soucy. “It went very well. It’s always good to work together. We learned a lot.”

High pressure will drift east today as a low pressure area and associated fronts moves towards the Valley from the west.
Our Sponsors END_OF_DOCUMENT_TOKEN_TO_BE_REPLACED