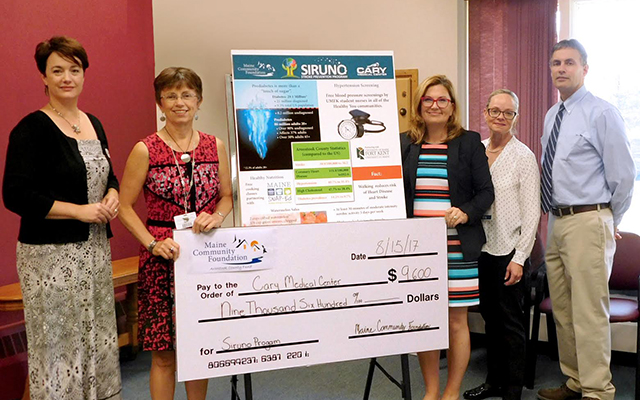 Community Contributor, Special to the Fiddlehead Focus • September 18, 2017
Cary Medical Center has announced the launch of a new initiative to reduce the number of strokes in the hospital’s service area.

Cary Medical Center has announced the launch of a new initiative to reduce the number of strokes in the hospital’s service area.  The project, ‘The Siruno Stroke Prevention Program’, will be made possible, in part, through a fund created by the family of the late Cesar Siruno, M.D., a General Surgeon who served on the hospital’s medical staff for more than 20 years.

The physician suffered a major stroke and never fully recovered and died on January 1, 2009.  At the time of his death, the family created an Endowment managed by the Jefferson Cary Foundation.  Income generated by the fund has been used to sponsor programs designed to increase stroke awareness and promote prevention. The Maine Community Foundation has provided a $10,000 grant to support this new initiative and Cary’s Community Relations Department will also contribute marketing and in-kind support.

At a press conference held August 15 in the Chan Center at Cary, hospital CEO, Kris Doody, RN announced the project. The program will focus on four major risk factors for stroke, Hypertension (high blood pressure), Type II diabetes, Healthy Nutrition, and Physical Activity.  The four risk factors will be targeted in six communities served by Cary’s award winning ‘Healthy You’ program. Doody explained that the goal of ‘Healthy You’ is to bring health promotion and prevention programs directly into local communities.

“‘Healthy You’, has become the most successful health promotion program in our history,” said Doody, who worked as the Manager of Surgical Services at Cary during Dr. Siruno’s tenure.  “Dr. Siruno was a strong believer in health promotion and prevention and I know he would be pleased that his name is being associated with this exciting program.”

Doody also pointed out that the Siruno project is right in line with recent findings by the hospital’s Community Health Needs Assessment.  Under the Affordable Care Act, hospitals are required to complete health needs assessments every three years.  Cary completed its most recent assessment late in 2016.

“Once again,” said the hospital CEO, “the assessment identified cardiovascular disease, diabetes and obesity among the County’s top five highest risk factors along with substance abuse and respiratory disease. This new initiative will address these three issues and impact nearly 30,000 people.”

The project will collaborate with the University of New England’s SNAP Ed program (Supplemental Nutrition Assistance Program Education), and the Nursing Program at the University of Maine at Fort Kent.  SNAP Ed will offer a series of cooking demonstration classes in the six communities served by the project and nursing students at the University will conduct Blood Pressure Screening Clinics.  These programs are free to the public and employers.  The Healthy You Walking Club will manage the physical activity aspect of the project.   The program outreach worker and program coordinator, Nancy Holmquist will conduct a year-long Type II Diabetes Prevention program, an evidence based program developed by the U.S Centers for Disease Control and Prevention.

Holmquist, a former elementary school teacher in New Sweden, said that she is excited about bringing such a comprehensive wellness program to the area.

“I believe that the Siruno Stroke Prevention Program will represent the first time such a comprehensive approach at wellness will be done over such a large scale here in northern Maine,” said Holmquist who is earning her certification as an instructor for the Diabetes program.  “I am looking forward to working with the communities served by Healthy You and our collaborating partners.”

The urgency to address the issue of cardiovascular disease in Northern Maine is demonstrated by the statistics represented in the needs assessment.  Diabetes prevalence in the County is at 14.2% of the population compared to 9.7% nationally.  Likewise the rate of Hypertension at 40.7% in Aroostook is substantially higher than the national rate of 31.4%.  The incidence of stroke in Aroostook County is 40/100,000 population compared to 36/100,000 nationally.  Finally, Coronary Heart disease rates are 112/100,000 in Aroostook VS 103/100,000 nationally.

The Siruno Stroke Prevention Program will begin in Caribou in early October in partnership with the Healthy You program.  For more information contact Nancy Holmquist at Cary, 498-1272 or by email at nholmquist@carymed.org.

An upper-level low that has been bringing clouds and showers to the region will move east into the Maritimes today and tonight. High pressure will build in tonight into Thursday morning followed by a warm front Thursday night.
Our Sponsors END_OF_DOCUMENT_TOKEN_TO_BE_REPLACED