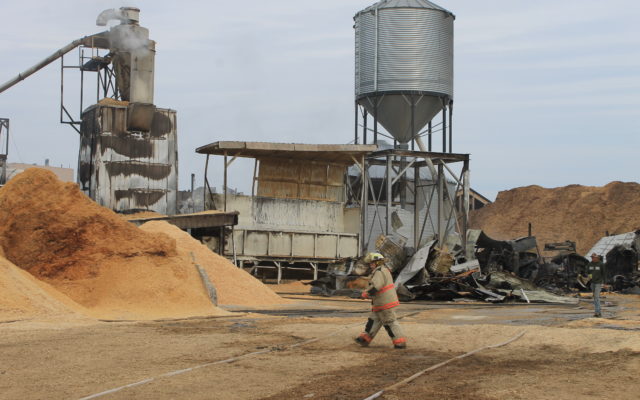 Anthony Brino • August 30, 2017
For the second time in its 11-year history, Northeast Pellets has suffered a catastrophic fire and is again planning to rebuild.

ASHLAND, Maine — For the second time in its 11-year history, Northeast Pellets has suffered a catastrophic fire and is again planning to rebuild.

A bulldozer operator at the nearby ReEnergy biomass plant reported the fire at Northeast Pellets’ main production building shortly after 3 a.m. Wednesday, Aug. 30, drawing more than 20 firefighters from four towns to extinguish the blaze.

No one was injured and no one was at the mill at the time of the fire, according to Chief Don Bouley of the Ashland Fire Department. He said the cause remains unknown and under investigation.

It took about an hour-and-a-half to extinguish the main fire, but crews were still dealing with a slow-burning fire inside a silo full of pellets Wednesday morning, Bouley said.

“With this type of industry, you get a lot of fine-powdered dust, and that’s not good,” the fire chief said. “We had about four or five small explosions and we need to make sure we’re not too close when we’re putting it out.”

He added that the crews would be gradually dealing with the fire inside the silo and avoiding opening any parts of it, which would bring in oxygen and fuel the fire.

Despite the low-flowing Aroostook River, fire crews have a good supply of water in the Ashland-area for this or other incidents, Bouley said. The fire department pumps from the river throughout the year to store and has tanks with more than 350,000 gallons to draw from, he said.

For Matt Bell, who started Northeast Pellets as the state’s first pellet manufacturer in 2006, Wednesday’s fire is a bit of repeated history. On March 30, 2009, shortly after midnight, a rock or piece of metal got caught in the mill’s machinery, sent out a spark that ignited sawdust and destroyed the main production building — halting production until 2011.

“We were two years rebuilding last time because of dealing with the insurance company,” Bell said Wednesday.

“We’ll start our cleanup as soon as we get approval from the [state] fire marshal] and our insurance company, and then we’ll start putting it back together,” Bell said, adding that he’s thankful for the community support he’s receiving.

“We’ve got 11 employees currently and we’re going to do our best to keep everybody employed.”

What the fire means for the company and Maine’s wood pellet supply is unclear.

Northeast Pellets sells direct to consumers from the mill, at more than 20 retailers in Maine and four stores in Massachusetts and New Hampshire, as well as in bulk to large customers such as the University of Maine at Fort Kent, which operates a biomass boiler with the local school district.

Bell said the fire ended up having destroyed all of the 500 tons of bulk pellets stored in two silos.

At the same time, Bell said the company has 2,500 tons of bagged pellets in inventory that will be available for sale.

“We still have plenty of back-product on the ground, so we’ll be able to keep our retailers and our local customers with supply,” Bell said. “But on the bulk side, I’m not really sure where that’s going to leave us.”

Last year, Northeast Pellets produced approximately 12,000 tons of pellets, which was an increase over 2015, a year with a warmer-than-average winter, Bell said.

“This year we were on pace to be up again,” Bell said, adding that the company had been operating a 12-hour production shift Monday through Friday all summer.

Bell said he’s spoken with the facilities manager at UMFK about the situation, as well as the leaders at Corinth Pellets, another pellet maker in Penobscot County. “They have offered to help us with any of the contracts we have for bulk accounts,” Bell said.

Despite the loss of production at Northeast Pellets, Mainers who heat with wood pellets will probably not see any major changes in the overall supply of pellets, Bell said.

On the heels of two winters with low oil prices, there is room for the other pellet makers to pick up the slack.

“There’s four mills in the state, counting us, and none of us have been running at capacity,” Bell said.

An upper-level low that has been bringing clouds and showers to the region will move east into the Maritimes today and tonight. High pressure will build in tonight into Thursday morning followed by a warm front Thursday night.
Our Sponsors END_OF_DOCUMENT_TOKEN_TO_BE_REPLACED