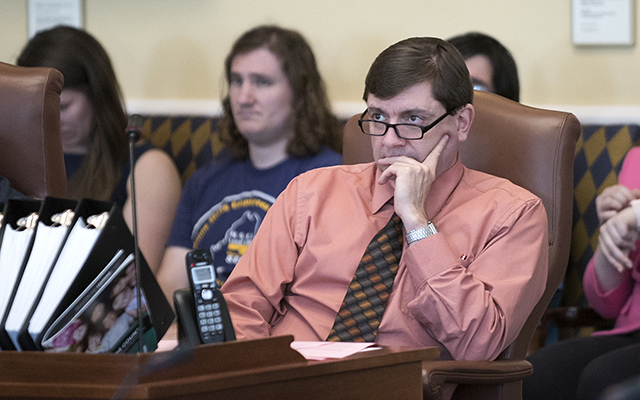 Jen Lynds, BDN Staff • July 22, 2017
State Sen. Troy Jackson of Allagash said Thursday he was “very disappointed” the Senate upheld the governor’s veto of a bill he said would have supported Maine loggers.

AUGUSTA, Maine — State Sen. Troy Jackson of Allagash said Thursday he was “very disappointed” the Senate upheld the governor’s veto of a bill he said would have supported Maine loggers.

LD 1573, which the senate democratic leader introduced, called for local, county and state government officials to give preference to in-state contractors whenever buying lumber or wood products.

A 14-16 vote Thursday to override Gov. Paul Lepage’s July 13 veto fell short of the two-thirds threshold necessary to enact the measure over the governor’s objection. The bill is now dead.

“I’m appalled that Senate Republicans voted to uphold Gov. LePage’s veto on a bill that would have supported a traditional Maine industry and helped hardworking logging families earn a living,” said Jackson, a fifth-generation logger whose family still works in Maine’s forests.

“Families like mine who earn a living in the woods are being squeezed out by unfair international competition,” he said. “The least Maine could do is pledge to support our own workers and our own sawmills when it needs wood products.”

The bill stressed that “price, fitness and quality” of the lumber or wood products from Maine would have to be at least equal to the goods offered from out of state or out of the country.

“I only asked for preference for American contractors,” he said. “Foreign labor and supplies, especially from Canada, are cheaper. President Trump is promoting ‘Made in America’ week at the White House to showcase products made in the United States, and here the Maine Legislature is vetoing this bill.”

Jackson said the pulp and paper industry in Maine has been impacted by challenges such as international competition, specifically the heavily subsidized Canadian logging sector. Jackson said that Maine sawmills, pellet mills, loggers and the truckers who haul wood are at a disadvantage competing with Canadians, whose health care, labor and source material costs are subsidized by their national and provincial governments. In many instances, he said, Canadian loggers harvest American wood to be processed in Canadian facilities and sold back to Americans.

As of 2014, logging contractors in Maine employed over 4,200 people and were responsible for the injection of $882 million into the state’s economy, according to the Professional Logging Contractors of Maine.

“I think that there is a misconception out there that Americans don’t want to work,” he said. “I told the governor there is no problem in finding Mainers who want to work. I know of logging trucks that are just sitting there because of foreign competition.”

In his veto letter to lawmakers, LePage said, “It is with regret that I must veto this bill because I believe in the objectives it seeks to advance. Whenever possible, the state should take affirmative steps to support local businesses … and, all things being competitive, awarding contracts to Maine businesses and contractors when it is possible to do so.”

He added, however, that a provision of the measure appeared to violate the Maine Constitution as it pertains to the minimum penalty to be imposed when a landowner changes the use of land from a program such as the state’s tree growth tax program.

“This bill would create an instance in which some landowners could withdraw their land from the tree growth program without penalty. While this might be a good idea, it is not permissible under the Maine Constitution …”

Jackson said the governor told him he could reintroduce the bill in the next session if that addressed the constitutional issue.

A broad area of low pressure crossing the state will bring widespread rainfall to the entire SJV today and tonight. Rain tapers to showers Thursday morning with showers lingering into the evening hours as the low lifts to the northeast.
Our Sponsors END_OF_DOCUMENT_TOKEN_TO_BE_REPLACED