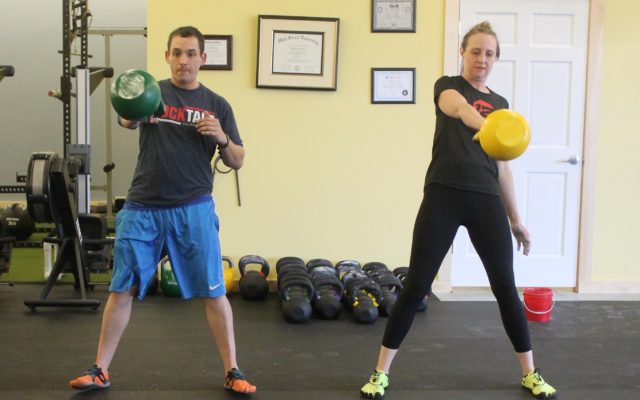 Jessica Potila, SJVT / FhF Staff Writer • June 19, 2017
Rick and Cassie Daigle first met on the Aroostook County high-school skiing circuit had no idea they would reconnect on Facebook and open a gym in Fort Kent.

FORT KENT, Maine — When Rick and Cassie Daigle first met on the Aroostook County high-school skiing circuit, they had no idea that years later they would reconnect on Facebook while living states apart, marry, have a family of their own and open a gym in Fort Kent.

Rick, a Fort Kent native, is a physical therapist by trade and Cassie, who is originally from Stockholm, attended Wake Forest University in North Carolina where she studied classical flute performance.

The couple has lived and worked in Texas, Idaho and Tennessee since marrying in 2013 but always missed their northern Maine roots.

A visit to The County last Christmas-time to visit family affirmed the Daigle’s desire to return home to raise their 2-year-old son, Keegan.

“Our son really enjoyed being around both sets of grandparents and flourished during the weeks we were home,” Cassie Daigle said.

The couple began formulating a plan to return to northern Maine permanently.

In June, they opened Too Far North Fitness in the Main Street building that formerly housed the Family Dollar retail store. Both Rick and Cassie are CrossFit Level 1 certified trainers. Cassie Daigle describes CrossFit as “varied functional movement performed at a high intensity.” She added that the workouts can be modified to accommodate any ability level and that she or Rick coach and program all of the workouts.

Cassie also coaches a one-on-one workout program, the Amazing 12. She described the Amazing 12 as a “total physical transformation program.”

In the near future, Too Far North Fitness will sublease an exercise room for other fitness instructors to offer classes.

The gym maintains exercise bikes, rowing machines, kettle bells, and even a sledgehammer and tractor-trailer tire for an intense upper body workouts. Old fashioned pull-ups and push-ups also are part of routines, and are performed on a giant rig which also contains gymnastic rings.

“A lot of what we do involves using our body as the machine,” Cassie said.

Rick Daigle said he and his wife plan to be creative when developing exercise routines.

“We know what winter is like up here,” he said. “There will be a workout where people will be shoveling snow.”

Cassie Daigle said she, Rick and Keegan are happy to be back home.

“We have an incredible support system and we love it. We just love this place. Everyone supports each other and it’s a great place to raise a family,” she said. “We’re looking forward to building a community of fitness and meeting other fitness minded people wherever they are in their journey.”

She added that their return to The County included other advantages.

“We ate a lot of poutine when we got back here,” she said.

For more information send an email to toofarnorthfit@gmail.com or visit the Too Far North Fitness Facebook page.

Maine is more than eight months into Medicaid expansion under the federal Affordable Care Act and trends around who is enrolling and where they live are starting to emerge, bucking some expectations and pointing out access challenges.
Apex Weather END_OF_DOCUMENT_TOKEN_TO_BE_REPLACED

Low pressure will track into the Atlantic from off the Southeast coast tonight into Thursday with increased cloudiness this evening into the overnight hours.
Campaign Corner END_OF_DOCUMENT_TOKEN_TO_BE_REPLACED

Dale Crafts filed his nomination papers for Feb. 21 with the Secretary of State to officially be placed on the primary ballot on June 9, 2020, for the U.S. House of Representatives 2nd District race.
Our Sponsors END_OF_DOCUMENT_TOKEN_TO_BE_REPLACED