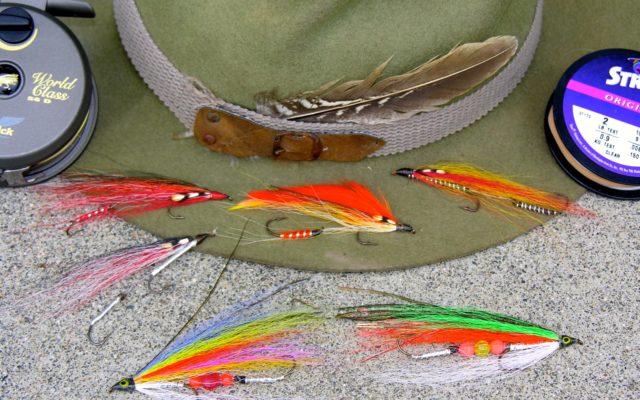 By Bill Graves, Mainely Outdoors • April 25, 2017
I’m as anxious as a long-tailed cat in a room full of rocking chairs for spring trolling to get underway.

I’m as anxious as a long-tailed cat in a room full of rocking chairs for spring trolling to get underway. While the regional rivers and streams are open, albeit high, wide and wild, it will be closer to Mother’s Day when favorite lakes and ponds shed their winter coats, turn over and become streamer fly responsive.

I’m a fly fishing fanatic, as are many Aroostook anglers, and become very excited each May for ice out trolling. Part of the reason stems from the long winter wait and not being able to fly fish for so many months. Part of the anticipation comes from the fact that some the largest fish of the year are generally hooked at this time of year, some anglers land the trophy trout or salmon of a lifetime on a fly rod. 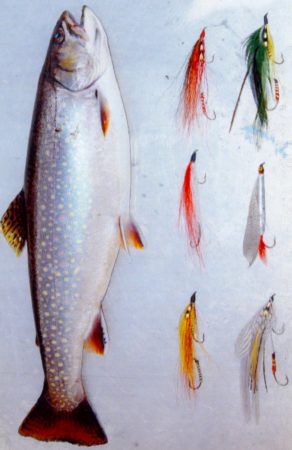 Spring trolling with streamer flies offers great trout and salmon action if anglers put a bit of thought into the types and colors of the tandem streamers they select.
(Bill Graves)

The fact that for a week or so after ice out gamefish tend to cruise near the lake surface to enjoy the sun and warmer water layer helps make light line, streamer trolling effective. Often there are smelt runs in progress around this time period as well, and that improves the fish activity and tandem streamer effectiveness.

Most spring trollers have favorite lakes and ponds and even special locations on particular waterways that seem to provide action year after year. Often, even more crucial to success than where and when to fish, is exactly what fly to drag behind the boat! Again, most sportsmen have a handful of proven favorites, and that in itself may pose a problem, -trophy, -size, gamefish don’t get old and large by being stupid. I believe fish become accustomed and even wary of certain fly patterns and colors, and I regularly changing styles and color combinations to yield greater success.

There are two main types of tandem and single hook streamer flies, and each has two specific subcategories of wing style. Imitator patterns are flies that are constructed in form and colors to look like a smelt or minnow, these work well in clear water and especially when smelt are running. Attractor patterns are brightly colored flies that are particularly effective in cloudy, debris-filled water often seen at ice out or after heavy rain that leads to a quick rise in water levels. Most of these garish flies resemble no living creature or food, but show up well at longer distances in poor water conditions and entice fish to investigate and often strike.

Each of the two styles have patterns tied with feather wings while others are tied using hair or bucktail as wing material. Along with the notable color difference between the often drab imitator and vividly hued attractor, there’s a very notable variation in movement through the water between hair and feather winged flies. It’s always wise to try both styles, on some days one will work far better than the other.

There are several great old and dependable streamer patterns that should be in every fly box. Proven feather-wing imitators such as a gray ghost, nine-three and Supervisor, go well with their brighter feather-wing attractor cousins the red-gray ghost, Ouananiche sunset, and sandbar smelt. Dependable hair wing imitators include a black and white bucktail, black nose dace and blue smelt and vivid hair wing attractors to have on hand would include a Miss Sharon, Mickey Finn, and little brook trout. A few popular streamers actually combine hair and feather wing components like the rainbow smelt, Counterfeiter and Magog smelt.

There are days when even venerable, age old streamers fail and lesser know flies need to be tied on and trolled, the trick is to have them at hand. These patterns maybe difficult to locate and purchase, you may have to tie your own or have a local fly tier create them for you. Among my proven backups are a blue devil, governor, grayhound, morning glory, Colonel Bates, and Candy’s smelt. One of these beauties has saved the day for me on several outings and they won’t fail other anglers.

I came up with a trolling technique over 30 years ago that seems to increase my success. I tie a 3 foot length of 10 pound leader material to my fly line and attach to one eye of a three way swivel. To a second eye I tie a 5 foot length of 6 pound leader and a nine foot leader to the final  eye, a splitshot sinker is attached 18 to 24 inches from the end of the shorter leader to help it run about a foot or so deeper. With this dual rig I can troll two streamers, an imitator and an attractor.

Lakes and ponds throughout Aroostook will begin clearing of ice as May arrives and some of the most exciting fishing of the season begins. The first couple of weeks after each waterway loses its winter coat is prime time for streamer trolling, so stock up on top rate patterns and try a few new ones too. Get out there early and often, and change flies regularly, there are bragging size fish to be caught.

An upper-level low will drop down from the north-northwest today and remain across the region Thursday and Friday with intermittent showers, periods of rain, plenty of clouds, and daytime highs about 10 degrees cooler than normal (about 60 degrees) for this time of year.
Our Sponsors END_OF_DOCUMENT_TOKEN_TO_BE_REPLACED