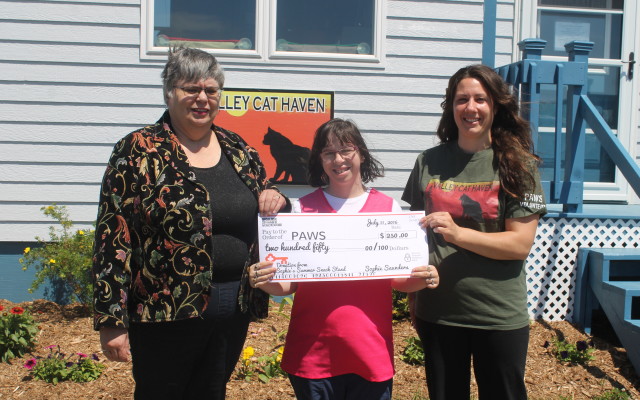 FORT KENT, Maine — A special Fort Kent Community High School sophomore is proving that we can all play a part in bettering our world. Sophie Saunders recently received a President’s Volunteer Service Award, complete with a letter signed by President Donald Trump.

Principal James Charette surprised Saunders with the award in front of the student body at a special assembly at the school on Monday, March 6. Saunders’ reaction was humble, emotional and joyful as Charette read the President’s letter during the assembly. Prudential Insurance Company representatives facilitated Saunders’ application for the award. George Dumond and Kelly Martin  of Prudential helped present the award to Saunders at the assembly. 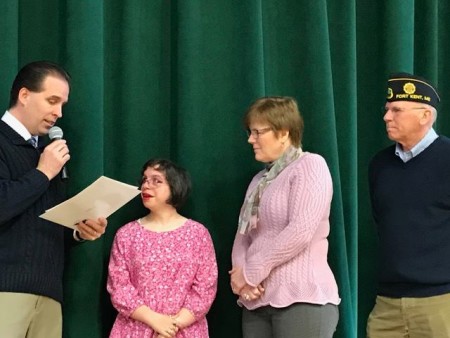 The selection committee specifically cited Saunders’  volunteer work with the local non-profit, no kill, cat rescue organization PAWS.  She has been helping out at the St. John Valley animal shelter for two years now, socializing with homeless cats who are often left abandoned and found near death.

Last summer, Saunders took her volunteerism to a new level by adding  an entrepreneurial element. She operated a temporary business, “Sophie’s Summer Snack Stand”,  and earned $250 by selling light food and lemonade in the parking lot across from the St. Louis church in Fort Kent for one July day. She donated all of the money to PAWS.

According to Saunders, the key to successful volunteer work is doing something you enjoy.

“Oh, I love the cats so much. I wish I could take them all home,” she said.

Not only do the cats  benefit from Sophie’s efforts, but she does as well, according to her mother, Paula Saunders. A Special Olympics athlete, Sophie was born with Williams syndrome, which presents challenges such as intellectual disabilities, according to Paula.

“Her developmental level is much lower than all her peers,” Paula said. “A lot of things she ends up doing require a degree of supervision. The ultimate goal is to make her as independent as possible.”

When volunteering at PAWS for one hour a day for four days each week, Sophie has a list of responsibilities which she checks off as each task is completed.

“That gives her a sense of accomplishment, She has a job and she looks forward to that every day and when she can’t go she gets very disappointed,” Paula said. 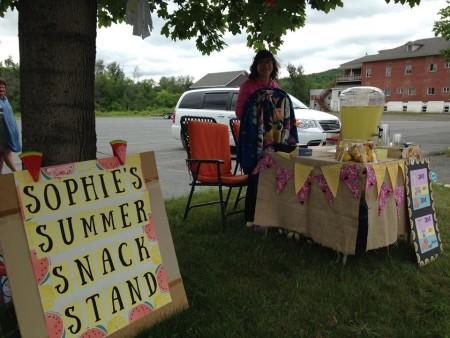 Sophie also spreads word of the PAWS organization to other students at school, in hopes of helping more cats to find permanent homes. Her classmates cheered loudly for Sophie as she received her President’s Award at the assembly.

“Kids at school have been so, so awesome with her. Everybody says ‘hi’ to her and she’s never had an unkind word to her at all.  She’s been very lucky,” Paula said, “We feel very fortunate that we’re in this community. I think this is the best place for her.”