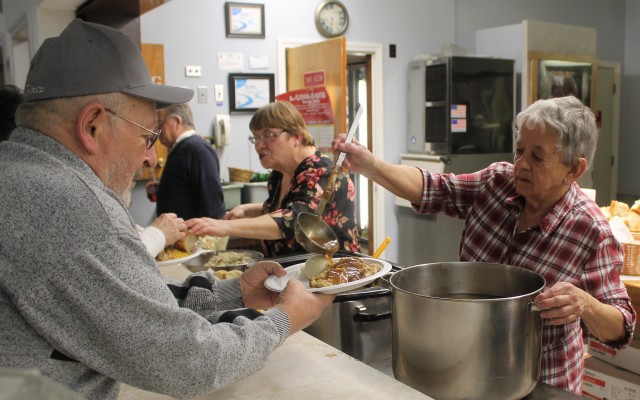 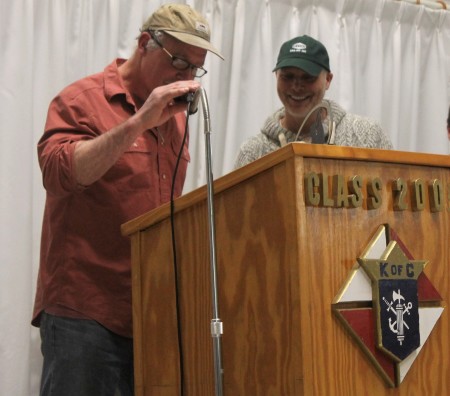 FORT KENT, Maine — An eight-time champion of the Can-Am Crown’s longest sled dog race, Martin Massicotte of St.-Tite, New Brunswick vowed to return to the St. John Valley in 2018 to defend his title, while speaking at the annual Can-Am awards banquet and dinner on Tuesday, March 7 at the Knights of Columbus Hall in Fort Kent.

Massicotte received a check in the amount of $6,104 for winning the Irving Woodlands Can-Am 200-mile race this year. The race is usually 250 miles-long, but organizers rerouted the trails to protect the mushers and their dogs following unusually warm weather in the weeks leading up to the race which called into question the safety of certain stretches of the original route.

For the fourth year in a row, Massicotte accepted the top prize at the banquet, where he thanked his family, and offered his competitors some good-natured ribbing.

“I’m sorry for those who are tired of seeing me win,” he joked. “I will see you next year.”

The audience of fellow mushers and community members cheered at the prospect of a Massicotte return to Can-Am in 2018.

In a more serious tone, Massicotte addressed his family at the banquet.

“Thank you to my son Etienne who helps me so much. He shares my passion for mushing,” he said. Etienne Massicotte, 15, competed for the first time at Can-Am this year, taking fifth in the Pepsi Bottling & Allen’s Coffee Flavored Brandy Can-Am Crown 30-mile race.

Martin Massicotte thanked his wife and Etienne’s mother, Marie-Josee Dulong, whom he referred to as “my Princess Marie,” for her “unconditional love, encouragement and support in helping me realize my dreams.” He also acknowledged the race marshall (Don Hibbs), all volunteers, the Fort Kent community and his longtime hosts, Luann and Kevin Ouellette.

Can-Am volunteer Lance Ouellette, head of the Main Street start crew said he had about 130 volunteers helping with the race on Friday.

Many volunteers attended the awards dinner where they were treated to a free meal in appreciation of their efforts. Monica Jandreau of St. Francis prepared turkey, gravy, mashed potatoes, corn and coleslaw. Cookies, cakes and bars topped a dessert table in the hall.

Among the volunteers were many University of Maine at Fort Kent students. Amairani Carbajal, a student originally from San Jose, California said she enjoyed helping to set up fences with her friends, but was not expecting the weather to be so cold. Temperatures dipped below zero on race day, with wind chills at minus 25.

“When your eyelashes get frozen, that’s fun,” she joked.

Massicotte was not alone among mushers who said they plan to return to Fort Kent in 2018.

Amy Dionne of St. David, who dropped from last year’s 250-mile race to protect the health of her dogs, finished the taxing 209-miler in eighth place. She said she was “proud to complete the race this year and will return next year.”

“I’ll always be here because I only live 20 minutes away,” she said.

Musher Sally Manikian of Shelburne, New Hampshire said she enjoyed the “absolutely beautiful wilderness” she witnessed while participating in the race. Manikian said she nearly dropped from the race at one point, but fellow musher Remy Leduc of Glenwood, New Brunswick stepped in to help her.

“We’ll get you to Allagash. You’ll get some gas money so you get to go home. You follow me,” Leduc said, according to Manikian.

Manikian and Leduc finished the Can-Am 250 in ninth and tenth places respectively.

Manikian said she would like to return to the event next year.

“This race is magical,” she said. “There are magical people in this race.”

Only one member of Maine’s congressional delegation had come out in favor of impeaching President Donald Trump ahead of House Speaker Nancy Pelosi’s Tuesday announcement that the Democratic-led House of Representatives would begin an impeachment inquiry.
Apex Weather END_OF_DOCUMENT_TOKEN_TO_BE_REPLACED

Dale Crafts filed his nomination papers for Feb. 21 with the Secretary of State to officially be placed on the primary ballot on June 9, 2020, for the U.S. House of Representatives 2nd District race.
Our Sponsors END_OF_DOCUMENT_TOKEN_TO_BE_REPLACED