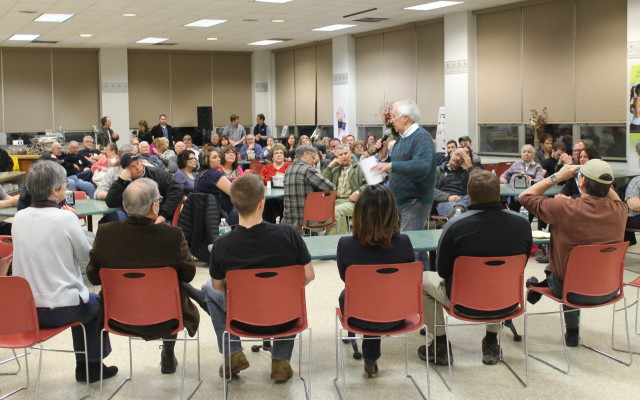 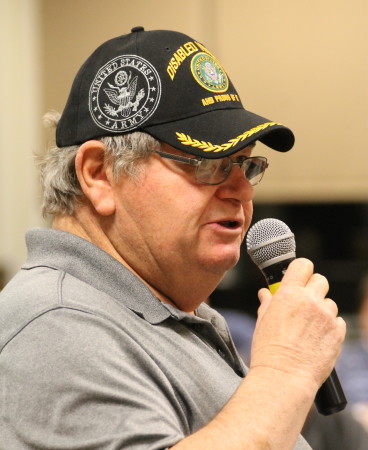 Calvin Hafford of Masardis expressed concern about loss of jobs and environmental issues in Maine’s woods to legislators at a Town Hall meeting hosted by Maine Democratic party leaders, Friday March 3, at the University of Maine at Fort Kent. (Don Eno | SJVT/FhF)

“We want to start getting around the state and talk with people about things that affect them,” State Senator Troy Jackson, D-Allagash, told audience members at the start of the meeting.

“Some people feel left behind and think nobody is listening to them,” said Jackson, who serves at the Senate minority leader.

Before taking questions from the audience, Jackson and several other legislators spoke briefly about issues including the state budget, job creation, tax cuts, environmental issues and funding education.

Jackson commented that he was skeptical how many jobs would be created if tax cuts were given to the rich. 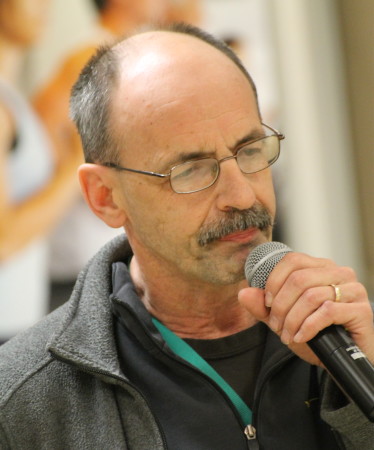 Bob Parent commented to legislators on the issue of excessive cuts in staffing at some state agencies during a Town Hall meeting hosted by Maine Democratic party leaders, Friday March 3, at the University of Maine at Fort Kent. (Don Eno | SJVT/FhF)

“You people are lucky to have legislators willing to travel long distances to serve,” Gideon said of the Aroostook County legislators. “I only have to drive 40 minutes to work.”

Chris Hallweaver of Van Buren asked the legislators what could be done to help bolster agricultural entrepreneurs and support agriculture and local food production. He commented that infrastructure, such as reliable internet and transportation are vital.

“We could really use some public policy to support our local farms,” Hallweaver said from the audience.

“We do have a number of bills this session dealing with food and broadband,” Jackson said.

More than one audience member spoke in opposition to allowing mining at Bald Mountain, located north of Clayton Lake. They cited a lack of long -term jobs and the potential for serious environmental degradation as reasons to prevent open pit extraction at the site.

In the past few years, J.D. Irving Ltd., which owns the land, has expressed interest in mining zinc and copper at the site, and the state legislature has opened the mining rules to possibly allow it, although no final rules have yet been adopted.

Rep. Martin responded that any mine at the site would not open for at least 10 years. He added that the Irving company was no longer interested in mining at Bald Mountain, but that company could conceivably lease the mining rights to a second party if final rules allowing open pit mining are approved by the legislature.

In 2012 Martin was among those calling for the new mining regulations, on the premise that, if done with proper environmental oversight, the project could create much needed jobs in the area.

Bob Parent of Fort Kent, who works at the state’s Department of Health and Human Services, commented that Governor Paul LePage continues to target state agencies for staff reductions, and expressed concern that adequate services would not be available to some citizens if cuts were to continue.

“We are aware that there has been a real push for reducing the government,” Rep. Gideon responded. “There is a concern that the remaining workload will be too much for the state employees left behind. We are laser focused on this issue.”

Speaking as someone who is still paying off accumulated family education debt, Sen. Libby sympathized with Lowry, 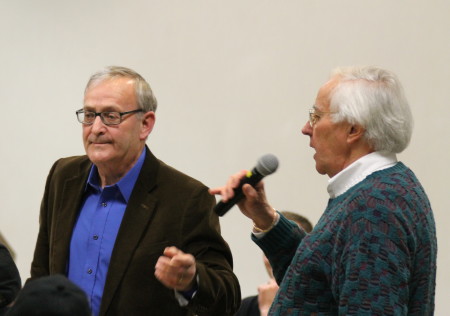 “It’s a huge chunk of money out of our family budget,” Libby said.

“Those loans go out of state,” added Jackson. “And that money is not spent locally.”

Jackson said the topic of student debt was an important one to him. “Wall Street and bankers are taking advantage of students with their high interest rates,” Jackson said.

Calvin Hafford of Masardis, a 1973 UMFK graduate, asked legislators to examine Maine’s Tree Growth Tax program, which he contends is being abused by large out-of-country corporations.

“Wood is cut, trucked and milled by foreign companies,” Hafford commented. He also expressed concern that some large forest companies are exempt from regulations aimed at preventing excessive tree harvesting.

Jackson, himself a logger, responded that he is well aware of the loss of jobs in the woods industry. Jackson has introduced LD 956 “An Act To Establish the Maine Buy America and Build Maine Act,” which has not not been taken up by any committee so far this session.

Fort Kent Town Manager Donald Guimond commented that cuts in the Homestead Exemption and shrinking state funding for education have a disproportionate impact on rural communities such as those in Aroostook County.

The legislators agreed and commented that increasing education funding to towns was a priority. Utilization of the anticipated revenue generated through the recently passed Question 2, that places a an additional 3 percent tax on individuals earning more than $200,000, is one way the state could do that.

“We will make sure it’s properly funded like it should be,” Gideon said, referring to the state’s commitment to fund 55 percent of the cost of K-12 public education, as approved by state referendum in 2004.

A broad area of low pressure crossing the state will bring widespread rainfall to the entire SJV today and tonight. Rain tapers to showers Thursday morning with showers lingering into the evening hours as the low lifts to the northeast.
Our Sponsors END_OF_DOCUMENT_TOKEN_TO_BE_REPLACED