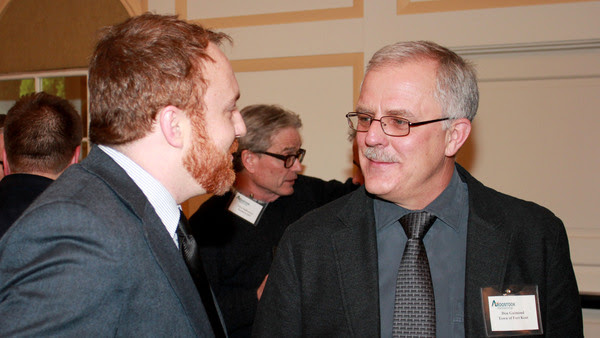 Contributed • February 5, 2017
A more than 20-year tradition continued when about 40 Aroostook County business leaders gathered for Aroostook Day at the Legislature.

AUGUSTA, Maine — A more than 20-year tradition continued in Augusta Wednesday, Jan. 25, when about 40 Aroostook County business leaders, economic development officials and others gathered with more than 25 Maine lawmakers for Aroostook Day at the Legislature.

“We thought it was foundational to maintaining good relationships with our lawmakers,” said Dorsey. “Any bill that comes up that has a positive or negative impact to The County economy or job prospects, we want to be apprised of, and we want the lawmakers to understand our input and know we are here to help.”

Senate Minority Leader Troy Jackson, a longtime legislator from Aroostook, has attended many Aroostook Days in the past.

“It’s surprising how many lawmakers have never been to The County, haven’t heard the stories and don’t understand how hard people are actually working to make things better,” said Jackson. “Having Aroostook County come here to Augusta is really important.”

Partnership Chairman Chris Anderson, President of Houlton’s F.A. Peabody, provided some background of Aroostook Day. He also talked about the Partnership and goals to encourage, advocate and support economic development in northern Maine.

Jason Parent, executive director of Aroostook County Action Program in Presque Isle, discussed workforce issues and two pieces of legislation that Rep. Trey Stewart, R-Presque Isle forwarded. Parent advocated support for An Act to Support Working Families and An Act to Promote Workforce Participation. The proposed legislation would address the so-called welfare cliff, where some people benefit greater by staying on certain forms of public assistance than by entering or re-entering the workforce.

The second panelist, Dana Doran, executive director of the Professional Logging Contractors of Maine, presented a quick look at the forest economy of Maine and recent recommendations to improve its outlook. Doran said the industry is facing challenges, but there are five important efforts to grow the forest economy, including conducting a global market analysis for future wood products. The other steps include a statewide wood supply analysis, growing low-value wood opportunities and developing an integrated marketing plan.

The final topic was the potential for mining in Maine and the difference between modern mining and legacy mining. Dorsey said with mining rules coming before the Maine Legislature for the third time in five years, it is important to separate emotion from facts. He urged lawmakers to consider the possibility that economic growth can go hand in hand with protecting the environment. Rep. John Martin, D-Eagle Lake, who sponsored the 2012 mining rules bill, said this latest bill would provide the most comprehensive mining rules in the nation.

“I purposely showed recent pictures of a modern mine in Michigan that show a clean, well-managed environment with advanced water treatment facilities, and it is night and day different from the horrors of the mines from 50 years ago,” Dorsey said. “I also pointed out that mining is the most heavily regulated industry in the US to mitigate those previous problems and that Maine has made our state laws more strict.”

Dorsey added the primary focus of the mining discussion points out the tremendous economic benefit an industry like mining would have for both Aroostook and Maine.

A broad area of low pressure crossing the state will bring widespread rainfall to the entire SJV today and tonight. Rain tapers to showers Thursday morning with showers lingering into the evening hours as the low lifts to the northeast.
Our Sponsors END_OF_DOCUMENT_TOKEN_TO_BE_REPLACED