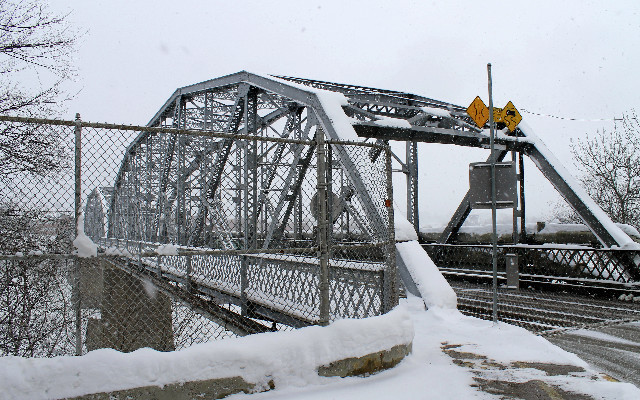 Don Eno, SJVT / FhF Staff Writer • December 15, 2016
The bridge connecting Madawaska to Edmundston, New Brunswick, built in 1921, is “nearing the end of its useful life,” according to the Maine Department of Transportation, and the agency is seeking proposals to conduct a feasibility study for replacing it and the adjacent U.S. Port of Entry facility.

MADAWASKA, Maine — The bridge connecting Madawaska to Edmundston, New Brunswick, built in 1921, is “nearing the end of its useful life,” according to the Maine Department of Transportation, and the agency is seeking proposals to conduct a feasibility study for replacing it and the adjacent U.S. Port of Entry facility.

“The lifespan of bridges varies dramatically depending on the type and environment,” said Nathan Howard, with MDOT’s Bureau of Planning, on Friday, Dec. 9. “The average age of the bridges we are replacing now is approximately 70 years.”

The U.S. port facility is “undersized, functionally obsolete” and does not meet current federal General Services Administration (GSA) or U.S. Customs and Border Protection design standards, according to the MDOT.

“This is very important to the community, the mill, and the economy of the region. Personally, I am excited to see this process kick off,” said Madawaska Town Manager Ryan D. Pelletier. “I know it will take time, but it’s great to see the MDOT being proactive to get ahead of the curve so that we aren’t faced with a situation where the bridge is restricted due to weight or other issues.”

“We believe that both border communities and their business benefit greatly from having a border crossing. It is something that our respective communities have come to cherish for the past 100 years and more,” said Edmundston Mayor Cyrille Simard.

Simard added that the heavy truck traffic generated by a busy commercial border crossing is something his city is very aware of and trying to address.

The period to submit proposals closed Dec. 9. The department has budgeted up to $500,000 for this project, which will only be a planning study. No construction or actual detailed design work is included, Howard said in a recent email. The feasibility study will only include proposed siting of a new U.S. POE and not its actual design. Design and construction of the port facility itself, falls under the GSA’s purview.

The objectives of the feasibility study are to identify a location for a replacement bridge, including approaches; identify a location for a new POE in Madawaska; examine opportunities for improved connections between the International bridge and the existing Canadian custom buildings in Edmundston; develop a final conceptual bridge alternative, including approaches, with cost estimates that will be used as the basis for a future bridge design and replacement effort.

At the request of the Maine State Legislature, MDOT, GSA and New Brunswick DTI finalized a study in 2010 to determine if the border stations at Madawaska-Edmundston and Van Buren-St. Leonard could accommodate commercial traffic in the long-term (2030), and if there was enough truck demand over this period to justify a new commercial crossing in the upper St. John River valley.

In 2013, a new POE in Van Buren was opened. The 22-acre site, with three buildings and 44,000 square feet of space, was designed to handle the 176,000 vehicles that were estimated to be using the border crossing annually. The Van Buren entry replacement, which dod not include a new bridge, cost $46 million and took two years to complete.

This latest study of a new bridge and port in Madawaska will not include any detailed design for the new bridge itself. “The project is still very early in the planning stage,” Howard said. “Design considerations will be developed later in the planning and design process.”

The feasibility study will include discussions with various stakeholders, including entities such as the city of Edmundston and town of Madawaska, and Twin Rivers Paper Company, which has production facilities on both sides of the river. Public meetings in both Madawaska and Edmundston will also be part of the study.

“We trust that the people looking into this project will proceed with multi-level consultation as to gather as much information as possible into where this new border crossing facility will be beneficial for continued cross-border business as well as diminish as much as possible the negative effects of the heavy trucking.”

Pelletier said he believes there will be ample opportunity for the public to offer input during the process of determining a location and design for the new bridge.

“I am offering the town’s full support and cooperation to MDOT as this process moved forward,” Pelletier added.

Funding for the study is being provided by MDOT in partnership with the GSA and the New Brunswick Department of Transportation and Infrastructure. MaineDOT received three proposals for the feasibility study, according to Howard.

The department anticipates awarding a contract by the end of the year or in early 2017. The winning bidder will have one year to complete the process.