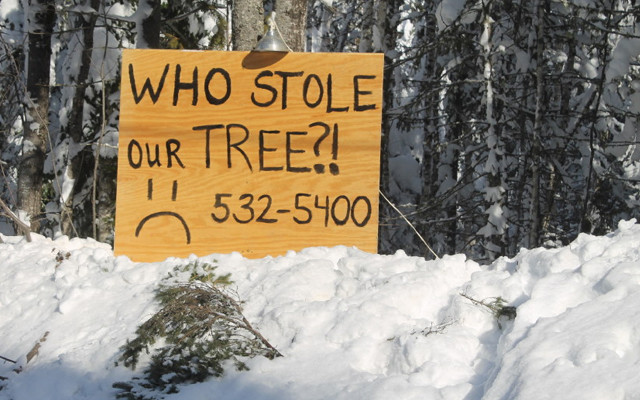 Jessica Potila, SJVT / FhF Staff Writer • December 9, 2016
During a season of giving, a thief or thieves, perhaps lacking in holiday spirit, stole a Christmas tree from the end of a driveway in Wallagrass.

WALLAGRASS, Maine — During a season of giving, a thief or thieves, perhaps lacking in holiday spirit, stole a Christmas tree from the end of a driveway in Wallagrass. 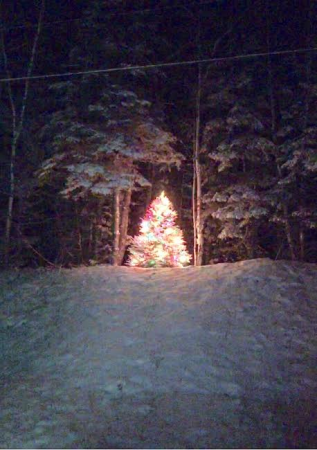 Wallagrass, Maine (Date unknown) — A Christmas tree sits on the property of Chris and Becky Toussaint of Wallagrass. (Contributed photo)

The real-life Grinch took the tree, along with the lights decorating it and a power strip, sometime between Wednesday evening, Dec. 7, and early Thursday morning, Dec. 8, from the Strip Road property of Chris and Becky Toussaint.

Chris Toussaint discovered the tree missing when he left for work early Thursday.

“He saw a big black hole where the Christmas tree usually is. You can see footprints and where it was dragged down the hill. There were three big ropes attached to trees around the tree and that had been cut. Somebody went through great effort,” Becky Toussaint said on Friday.

The Toussaints have been placing a Christmas tree on their property for the past five or six years, according to Becky, who added that choosing the tree and setting it up has become a family tradition between Chris and the couple’s son Matthew, who is away at college.

Chris and Matthew continued the tradition this year when Matthew was home for Thanksgiving break. Becky said it was difficult to call Matthew and let him know someone had stolen the tree. “My son said, ‘I can’t imagine that somebody would drive by something so pretty and instead of thinking this is so nice they would actually think of stealing it,’” Becky said. “It’s just kind of sad.”

On Thursday, the Toussaints erected a sign on the side of the Strip Road asking, “Who stole our tree?” along with the number for the Maine State Police, who are investigating the crime.

Becky said she wanted people to know that the family did not take the tree down themselves. Many people throughout the years have told her the tree provides them with joy when they see it lit up in the evenings while driving by, she said.

“Not that it’s a big monetary deal, just the idea someone came and did that is just kind of disheartening. Are we stupid to put another one up and have them take it again?”

Yet with two weeks left until Christmas, Becky said the family will do just that … although this time Chris may attach the tree with metal chains rather than rope.

“He goes, ‘I never would have thought of chaining down a Christmas tree,” Becky said.

The couple’s daughter, Michelle Toussaint, tried to be optimistic about the tree’s fate.

“She said, ‘Mom, if I knew somebody didn’t have the means to get a Christmas tree I would feel good just knowing somebody really needed it and that it is in a nice spot somewhere being enjoyed, but I don’t think that’s the case,’” Becky said.

Anyone with information about the stolen tree should contact the Maine State Police Houlton barracks at 207-532-5400.

Perhaps the thief or thieves will find their heart grow ten sizes bigger, akin to Dr. Seuss’ Grinch, and return the tree.

Only one member of Maine’s congressional delegation had come out in favor of impeaching President Donald Trump ahead of House Speaker Nancy Pelosi’s Tuesday announcement that the Democratic-led House of Representatives would begin an impeachment inquiry.
Apex Weather END_OF_DOCUMENT_TOKEN_TO_BE_REPLACED

A strong upper-ridge anchored off the Southeastern US coast will bring warmer and more humid than normal conditions to the Valley through the late week period.
Campaign Corner END_OF_DOCUMENT_TOKEN_TO_BE_REPLACED

Dale Crafts filed his nomination papers for Feb. 21 with the Secretary of State to officially be placed on the primary ballot on June 9, 2020, for the U.S. House of Representatives 2nd District race.
Our Sponsors END_OF_DOCUMENT_TOKEN_TO_BE_REPLACED