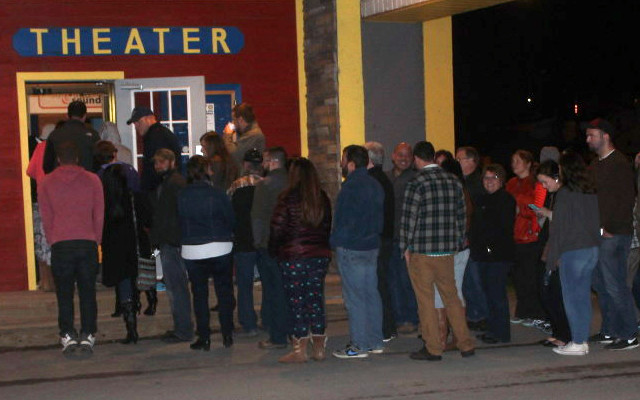 Jessica Potila, SJVT / FhF Staff Writer • October 31, 2016
Movie-goers from the St. John Valley (and beyond) gathered by the hundreds on a chilly Sunday evening to attend the premiere of the locally-produced film “Quintuplets.”

FORT KENT, Maine — If winter coats could replace designer gowns, Fort Kent’s Century Theater might have been mistaken for an Academy Awards celebration, Sunday, Oct. 30. Community members gathered by the hundreds on the chilled evening and waited in line to attend the premiere of the locally-produced movie “Quintuplets.” 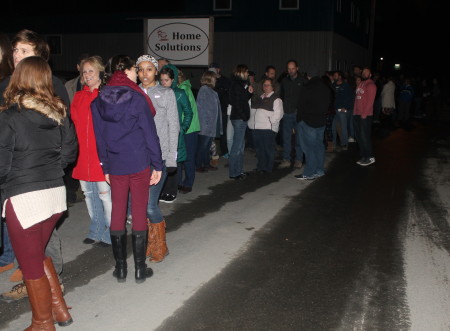 Hundreds of eager movie-goers line up down the block from Century Theater to Sears to be among the first to view “Quintuplets” on a cold Sunday evening, Oct. 30, 2016. (Jessica Potila | SJVT / FhF)

“You couldn’t have asked for better. The Valley people really came through,” said ‘Quintuplets’ screenwriter, director and co-producer Doug Clapp. According to Clapp, nearly 300 people showed up for the premiere.

“I can’t speak for everybody that saw the movie, but the people that lingered at the end said they loved it,” he said.

Sean Plourde, who performed in the play under Clapp’s direction in 1998, traveled to Fort Kent from his home in Ellsworth just to attend the premiere.

“The experience was quite nostalgic for me. As I was seeing the story unfold on screen it brought me back to moments in the play briefly. However, the film to me was so well done that it didn’t distract me from enjoying and feeling the same suspense that someone who had never seen the play would have been experiencing,” he said. “I am impressed with the quality of the film I saw, especially seeing as it was the first film project for a lot of the people involved.”

Maria Nadeau said the interesting story, use of music at the right moments, scenery, good camera work and makeup were all strengths for the film.

“It was interesting when the quintuplets finally joined together and demonstrated their power,” she said.

Moviegoer Max Jandreau said the film reminded him somewhat of the highly successful “Evil Dead” films. “It was a fun, enjoyable movie romp,” he said.

Jandreau agreed with Nadeau and Plourde that the actors worked well with one another. “The ensemble work between the two groups of actors, (the visiting travelers, and the family), they seemed to play well off one another and knew how to carry some of the more spooky moments in the film,” Jandreau said. 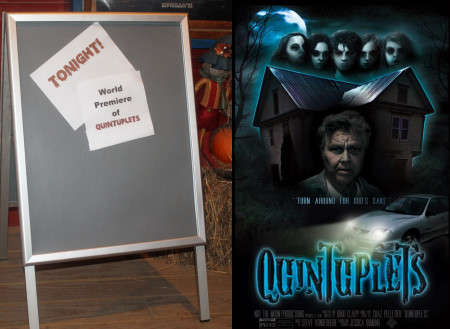 Clapp said he was encouraged by audience reaction to the film during the Sunday evening premiere. “During most of the show you could hear a pin drop, and the audience reacted right on cue to the jump scares and the plot twists,” he said.

“‘Quintuplets’ co-producer Charles Pelletier said he “never thought we would pack the theater like we did. I’m very thankful for all the wonderful support we got from the community. I hope they enjoyed it as much as we enjoyed creating it.”

Century Theater owner Ben Paradis said it was a “great honor to put on the worldwide premiere.” He also shared plans to remodel Century Theater to include an additional screen in coming months.

Clapp and Pelletier plan to tweak “Quintuplets” for editorial flaws and then seek a distributor.

Plourde said the story-driven nature of the film, which attracted him most, is “Quintuplets” biggest strength.

“I think the biggest selling point would be that it’s a smart, and psychological suspense thriller that will keep people on the edge of their seat,” he said.

A broad area of low pressure crossing the state will bring widespread rainfall to the entire SJV today and tonight. Rain tapers to showers Thursday morning with showers lingering into the evening hours as the low lifts to the northeast.
Our Sponsors END_OF_DOCUMENT_TOKEN_TO_BE_REPLACED