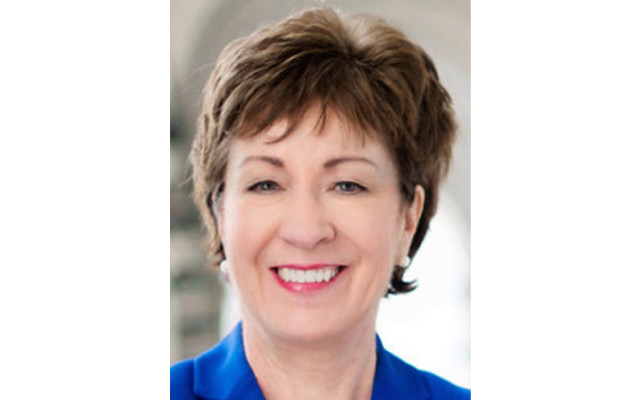 Contributed • October 1, 2016
U.S. Sen. Susan Collins (R-Maine) has received four national awards for her work on behalf of emergency medical and fire workers, the homeless, small business, and for her efforts toward bipartisanship.

WASHINGTON, D.C. — U.S. Sen. Susan Collins (R-Maine) has received four national awards recently for her work on behalf of emergency medical and fire workers, the homeless, small business, and for her efforts toward bipartisanship in Congress.

During her time in the Senate, Beals said, Senator Collins has advocated for EMS and fire departments, working to ensure that they have the resources, training, and equipment they need.

The National Law Center on Homelessness and Poverty recently honored Collins at the 18th annual McKinney-Vento Awards Ceremony in Washington, D.C. The Law Center presented the Bruce F. Vento Award to Collins for her efforts to advance legislation to prevent homelessness among young adults, foster children, and families.

“I am grateful to be recognized for my work to reduce youth homelessness. This is one of our nation’s most difficult challenges and its size is staggering, with more than 1.3 million young people experiencing homelessness each year,” said Collins. “This is a call to action. We must send a powerful message to the most vulnerable among us: there are people who care about you, who want you to be safe, and who want you to succeed.”

Also in Washington, the National Federation of Independent Business presented Collins with the biennial Guardian of Small Business Award for her support of America’s small business owners in the 114th Congress.

The Guardian of Small Business is NFIB’s most prestigious award,reserved for lawmakers who vote to support key issues that are important to small business owners.

Finally, Collins was recognized with the inaugural Jacob K. Javits Prize for Bipartisan Leadership at the 2016 National Opportunity Summit in New York City, in recognition of her leadership in facilitating bipartisanship during her more than 19 years of Senate service.

The Javits Foundation bestowed this lifetime achievement award on Collins for her work to advance commonsense reforms by finding common ground with members of both parties on many critical issues.

“Compromise is a means of accomplishment, of understanding and respecting differences in order to find solutions. Even in this highly charged political environment, it is still possible to find members in both parties who understand that compromise does not mean betraying one’s principles,” said Collins upon receiving the award. “Senator Jacob Javits handed us the beacon of reason and service. We must all do our part to carry it forward.”

The Javits Prize was established in 2016 by the Marian B. and Jacob K. Javits Foundation. The Foundation was created in 1986 by Jacob Javits, a former U.S. Senator from New York who served in Congress for more than three decades. The annual award will honor public servants whose achievements advance the public interest.

The 500-millibar upper-level trough associated with the cold front and low pressure that brought last evening's thunderstorms will slowly move over the Valley today and Thursday with a chance for scattered showers and an isolated thunderstorm or two across the Valley this afternoon.
Our Sponsors END_OF_DOCUMENT_TOKEN_TO_BE_REPLACED