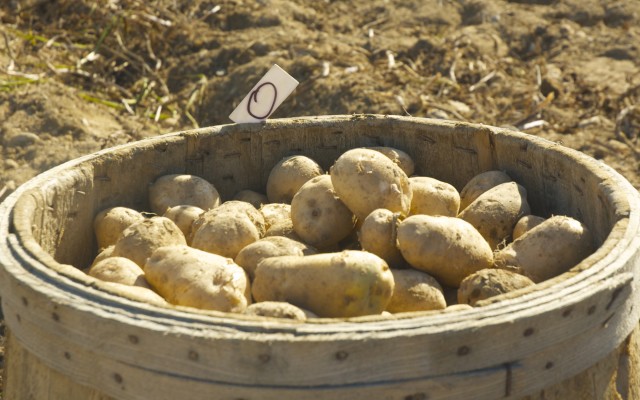 Jen Lynds, BDN Staff • July 27, 2016
The Maine Potato Board is hopeful that adding potassium to FDA food labels will help potato sales and promote one of Maine's primary crops.

PRESQUE ISLE, Maine — It is no secret that potatoes are a great source of potassium, according to Don Flannery, executive director of the Maine Potato Board. For decades, industry officials have lauded the nutritional benefits of the state’s signature crop, which has just 110 calories in a medium potato, along with zero fat and 620 milligrams of potassium if eaten with the skin, according to the Maine Potato Board.

Now the board is watching steps taken by the U.S. Food and Drug Administration in late May, when the agency updated nutritional information for most packaged foods sold in the United States. One step taken was to add potassium and vitamin D to the new nutrition labels, a decision made because those two nutrients often are absent in the American diet, according to nationwide food consumption surveys. A lack of potassium and vitamin D can increase risk of chronic disease, according to a written statement by the FDA.

“We’ve talked for years about how healthy they are, so any other recognition is good,” Flannery, who highlighted the news in an industry newsletter in July, said.

“You always hope that people are reading food labels and understand how healthy potatoes are,” he said. “We have done a lot of work around educating the public about the benefits. But I don’t really know how many consumers out there read nutrition labels very carefully.”

Most food manufacturers will be required to use the new label by July 26, 2018, and the FDA plans an education campaign geared toward the public on the new requirements.

Flannery said the industry encourages anything that can draw more attention to the potato in general. “This could add strength to sales, you just have to watch and see,” he said.

The Maine potato industry and members of the state’s congressional delegation engaged in a significant fight to defend the potato in 2011, when the U.S. Department of Agriculture proposed new nutrition guidelines for the National School Lunch Program that sought to ban potatoes from the School Breakfast Program altogether. U.S. Sen. Susan Collins later co-wrote an amendment with Sen. Mark Udall, D-Colorado, that blocked the USDA from limiting potatoes and gave the USDA flexibility to regulate the preparation of potatoes when it issued the final version of its new school nutrition guidelines.

Shopping in Houlton on Wednesday, Heidi Fortier said she wasn’t even aware there had been a change in the FDA labeling rules.

“You know, my friends tease me about it, but I do read labels,” she said. “I guess I am kind of compulsive about that. We eat potatoes nearly every night for supper, and I am glad to hear that the FDA is doing this. People always think potatoes are just made into french fries, which isn’t true.”

As the Maine Turnpike expects 1 million travelers alone over the Labor Day weekend, policymakers are gearing up for a sprint to solve one of the state’s most intractable problems: a long-standing — and growing — transportation funding gap.
Apex Weather END_OF_DOCUMENT_TOKEN_TO_BE_REPLACED

A cold front moved through the Valley early this morning, and it will be followed by an Arctic cold front this afternoon.
Campaign Corner END_OF_DOCUMENT_TOKEN_TO_BE_REPLACED