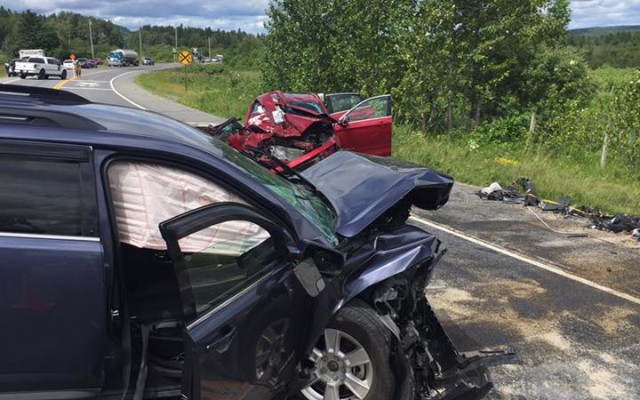 “I heard today that at least two of them were still in an induced coma. They had significant injuries,” Chief Bresset said Wednesday, July 20. “They’re stable.”

Cyr and his passenger, Linda Cyr, age 62, were among the victims transported in critical condition to the Bangor hospital by LifeFlight following the crash, as was a passenger in Emond’s vehicle, 69-year-old Lionel Emond.

Linda Emond was treated at Cary Medical Center and released on Wednesday.

A third vehicle, a black 2012 Jeep Liberty utility vehicle operated by Ryan Deschaine, age 32, avoided the crash by swerving off the road. Deschaine’s infant son was also in the Jeep Liberty. Neither Deschaine nor the child were injured as a result of the accident, according to Bresett.

The accident remains under investigation.

Members of the Van Buren Ambulance Service and Caribou Fire and Ambulance Department also assisted at the scene.

Maine is more than eight months into Medicaid expansion under the federal Affordable Care Act and trends around who is enrolling and where they live are starting to emerge, bucking some expectations and pointing out access challenges.
Apex Weather END_OF_DOCUMENT_TOKEN_TO_BE_REPLACED

Low pressure will track into the Atlantic from off the Southeast coast tonight into Thursday with increased cloudiness this evening into the overnight hours.
Campaign Corner END_OF_DOCUMENT_TOKEN_TO_BE_REPLACED

Dale Crafts filed his nomination papers for Feb. 21 with the Secretary of State to officially be placed on the primary ballot on June 9, 2020, for the U.S. House of Representatives 2nd District race.
Our Sponsors END_OF_DOCUMENT_TOKEN_TO_BE_REPLACED