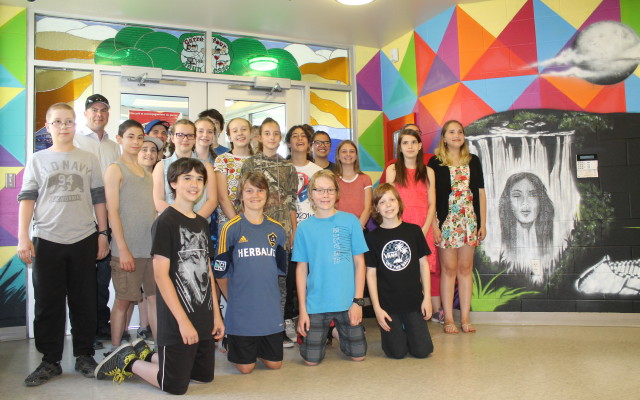 EDMUNDSTON, New Brunswick – Grade 7 students at Edmundston’s Carrefour de la Jeunesse officially unveiled a multi-wall mural, June 21. For weeks, the students had worked with local artist Steve Rousselle on a design that spoke to local First Nation themes. The mural was completed in time for Canada’s National Aboriginal Day, June 21. The mural, located inside the main entrance of the school, depicts the legend of of Malobiannah, a young Maliseet woman who sacrificed herself to save her people during an Iroquois invasion. It is said that Malobiannah guided an invading war party to their death by taking them over Grand Falls on the St. John River. A section of the mural speaks to the portion of the legend that says Malabiannah’s face can sometimes be seen in the moon and that her singing is heard on the wind. Legend has it that she sang while she guided the invaders, so as to cover the sound of the approaching falls. Rousselle worked with students on the design and helped create the stencils, but the students did nearly all of the painting, he said. “We asked them what they wanted to do,” Rousselle said. “They wanted to represent the legend.” The mural also has an interpretive plaque, telling the story of Malobiannah.

EDMUNDSTON 06’21/2016 — The new mural by students at Edmundston’s Carrefour de la Jeunesse depicts the legend of of Malobiannah, a young Maliseet woman who sacrificed herself to save her people during an Iroquois invasion, by leading the invaders over Grand Falls.

Sebastien Berube, a Community and Cultural Development Officer who works with local schools and local First Nations groups spoke at the unveiling, commenting on the importance the legend has for local indigenous people and the history of the Madawaska region. Pier-Luc Cimon and Tiffany Dunphy, two First Nation students at the school also spoke at the unveiling. Dunphy said that it meant a lot to connect Maliseet history with the local school. She said it was also fun teaching others about her culture. More than 20 students worked on the project for two months, spending up to three hours a day on the project, often before classes started.

Maine is more than eight months into Medicaid expansion under the federal Affordable Care Act and trends around who is enrolling and where they live are starting to emerge, bucking some expectations and pointing out access challenges.
Apex Weather END_OF_DOCUMENT_TOKEN_TO_BE_REPLACED

Low pressure will track into the Atlantic from off the Southeast coast tonight into Thursday with increased cloudiness this evening into the overnight hours.
Campaign Corner END_OF_DOCUMENT_TOKEN_TO_BE_REPLACED

Dale Crafts filed his nomination papers for Feb. 21 with the Secretary of State to officially be placed on the primary ballot on June 9, 2020, for the U.S. House of Representatives 2nd District race.
Our Sponsors END_OF_DOCUMENT_TOKEN_TO_BE_REPLACED