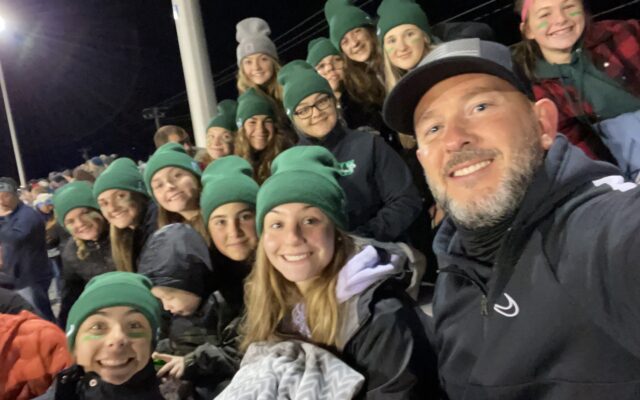 With this being only his second season coaching the varsity girls, Clavette has proven remarkably effective at leading the team to success. He led the Pioneers to a Class D North championship this season. Last year the team captured the Aroostook League Division II championship, a modified playoff format due to the pandemic.

“The beauty of this sport is that tactically, a team that is not necessarily as strong as its opponent can win the day if the tactics are right and the team buys into the philosophy wholeheartedly.  It’s down to putting the right people in the right places to best affect the game,” Clavette said. 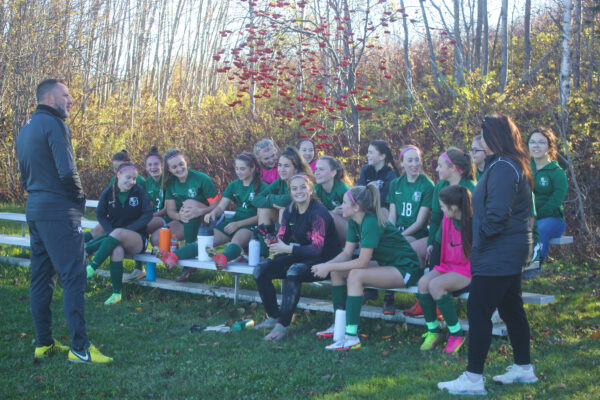 Clavette doesn’t waste an opportunity to learn from other coaches, a fact which he said helped him to achieve the success he has had thus far. Among them are Dean Gendreau of Madawaska, Doug Cyr of Fort Kent, Robbie Krull of Dutch Soccer Academy and Wisdom athletic director Scott Pelletier.

“Pete is the definition of a team player,” Pelletier said. “He never takes credit for all the great work he does and takes a humble approach. It’s all about the team and they have become family.  He has given up a lot of himself to the program and he has all of the qualities of a great coach.”

“Coach Pete has not only helped me grow as an individual on the field but also as an individual off the field,” junior Abigail Lerman said. “He encourages us to be active in our community, prioritize school, and make sure to take care of our overall health.”

Lerman scored her 100th goal while under the tutelage of Clavette.

“Coach Pete always is pushing us to our full potential and never gives up on us,” Lerman said. “An example of a challenge that coach would propose to me was in training, forcing me to only use my less dominant foot, so that it would strengthen me so that I would be more versatile as a player.”

He has 12 years of experience coaching soccer, including with the Soccer Edmundston U15 AA Girls team, composed of girls from Frenchville, St. Agatha, Fort Kent and Madawaska. Last year, the team went undefeated in the UNB Soccer Challenge.

Born and raised in the St. John Valley, Clavette is a 1992 graduate of Madawaska High School. He has some experience being an athlete himself having played basketball for the University of Maine at Fort Kent.

Clavette attributes much of his success as a soccer coach to the support of his family. He and wife Tammy are parents to Jordan, 18, an All Aroostook goalie for the Class D North runners up Wisdom boys, and Kamryn,15, a striker for the Pioneer girls.

Achieving recognition from Maine Soccer Coaches would certainly not have been possible without the many young ladies he has taught the game of soccer to over the years,” Clavette said.

“They bought into my coaching philosophy hook line and sinker. They were the ones that did the heavy lifting and whether it was in the rain, snow, heat or humidity they gave 110 percent always and were all in, all the time. They made this possible through their hard work and dedication,” Clavette said.

Three candidates are vying for two seats on the Fort Kent Town Council. Voters will decide which of the three -- Corey Pelletier, Brandon Dayton or Andrew Caron -- will get a seat during the town’s annual election on Monday, March 22.
Apex Weather END_OF_DOCUMENT_TOKEN_TO_BE_REPLACED

A trough will keep plenty of clouds across the Valley today along with a slight chance for precipitation. Mostly cloudy skies continue overnight as a low pressure area over the Mid-Atlantic tracks into the Gulf of Maine and strengthens as it moves from Cape Cod to Nova Scotia.
Our Sponsors END_OF_DOCUMENT_TOKEN_TO_BE_REPLACED