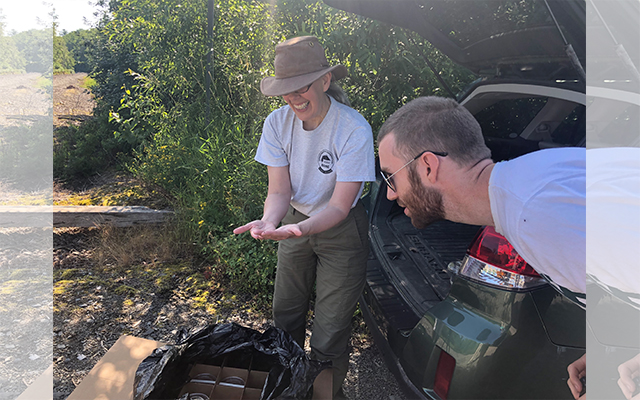 Morgan Mitchell • July 18, 2019
More than a year after the invasive species emerald ash borer was discovered in Maine along the St. John River in the Valley, the Maine Department of Agriculture, Conservation and Forestry released three parasitoid species of non-stinging wasps Thursday to fight the bug that is bringing death to the ash trees there.

MADAWASKA, Maine — More than a year after the invasive species emerald ash borer was discovered in Maine along the St. John River in the Valley, the Maine Department of Agriculture, Conservation and Forestry released three parasitoid species of non-stinging wasps Thursday to fight the bug that is bringing death to the ash trees there.

The emerald ash borer, an invasive species that has killed hundreds of millions of ash trees throughout the country by burrowing in and feeding on the tree, was found last year in Madawaska, along the St. John River.

The discovery of the insect’s arrival in Maine prompted officials with the Maine Department of Agriculture, Conservation and Forestry to begin discussing a statewide emergency-response plan.

Part of that plan in June 2018 was twofold: The first was a stop movement order, where firewood and lumber was not to be allowed to be delivered and moved around to areas outside of the affected areas. The second phase was a full-on quarantine of the Madawaska and Frenchville areas to prevent any movement of wood even within the area.

Prior to the initial detection, Colleen Teerling, Entomologist for the Maine Forest Service Insect and Disease Lab planned for the inevitable and worked to arrange permits to release parasitoids to battle the impending Emerald Ash Borer invasion.

“We knew it was coming and we wanted to have a plan in place,” she said.

Nearly a year and several visits with scientists later, the Maine Department of Agriculture, Conservation and Forestry was able to find the right parasitoids to help in the short term to get rid of the pest. The parasitoid species of non-stinging wasps released Thursday in Madawaska, and will be released in the rest of Aroostook County, are Oobius agrili, Tetrastichus planipennisi and Spathius galinae — which are the same size or smaller than those pesky “no-see-’ems” people in the Valley fight every summer.

These, however, do not sting or bite, according to Teerling.

While this is only a short-term solution, it will take about a decade before the Valley will see the positive effects of the EAB’s predators, according to Teerling.

“It will be years and years before we actually control the population, so actually the ash trees that are there now will probably end up dying, almost certainly end up dying,” Teerling said. “As that happens, these parasites will build up in numbers and get to the point where when the next generation of ash comes up, there will be enough to actually control emerald ash borers so that the trees can live.”

During the release on Thursday, July 18, Neil Thompson, a professor from the University of Maine at Fort Kent who teaches the Forest Protection II course in UMFK’s Forestry Program, went to watch and help with the release of the bio-control.

“This is an exciting opportunity that just came up,” he said.

Thompson’s wife, Kirsten, is in a similar field on the other end of the country.

“I work with a pest insect on the West Coast end of North America, which does not have a biological control, so I am interested in seeing how bio-control will affect forest pests on the East Coast,” Kirsten said.

Scientists with the Federal Drug Administration visited China, which is in the natural range of the insects, to look for predators that would attack only the problem, wouldn’t negatively affect the other species in North America, and would survive in Northern Maine.

“We don’t know 100 percent how successful they are going to be, other than the fact that we know they have been reproducing in numbers in other states where they have been using it for a few years,” she said.

This is the first time, however, that the parasitoids have been released in the state to combat the invasive species, and it won’t be the last. The department plans to release anywhere from 200-1,000 of each species of predator each week during the summer for the next two years. Teerling said not to worry, though, because the citizens of the Valley, and eventually the County will not be bothered by the biological control.

“All the parasitoids care about is laying their eggs on the emerald ash borer,” Teerling said. “They have no interest in mammals or even any other insects.”

The plan is to continue releasing the parasitoids at the sites of concentrated ash trees that are infected with EAB.

“If we get to the wonderful point where EAB practically disappears, then this insect will probably disappear as well because it is so closely tied to the emerald ash borer,” Teerling said.

A cold front will cross the region today associated with the upper trough and low which will absorb the remnants of Isaias in Canada.
Our Sponsors END_OF_DOCUMENT_TOKEN_TO_BE_REPLACED