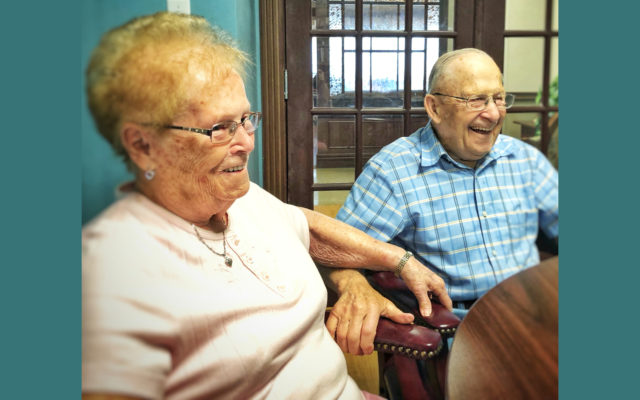 Morgan Mitchell • July 10, 2019
At 88 and 90 years old, respectively, Alice and Patrick Chasse still reminisce about the good days they have had in the Valley while holding hands in the library of Ridgewood Estates.

At 88 and 90 years old, respectively, Alice and Patrick Chasse still reminisce about the good days they have had in the Valley while holding hands in the library of Ridgewood Estates.

After 68 years of marriage, the pair said the secret to a long, happy marriage is communication.

“When you have trouble, you stop and talk,” Patrick said. “I’m just happy that I kept her so far.”

While Alice has a bed at Ridgewood Estates, Patrick is on the waiting list for his room, while the pair waits for a couples room at the facility.

“He doesn’t hate me cause he comes to see me every day,” Alice joked. 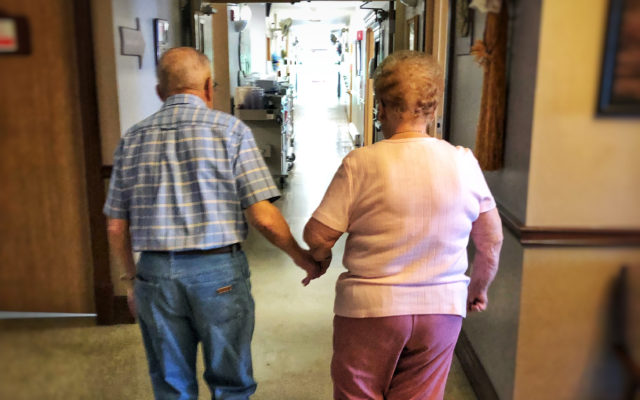 Patrick (right) and Alice (left) walk down the hall at Ridgewood Estates on their way to lunch. Patrick visits Alice everyday at Ridgewood as he waits on the list for his own room to join his wife of 68 years. (Morgan Mitchell)

The pair married when Alice was 20 and Patrick was 22. Alice grew up as one of 10 children, and after her mother died, raised the young children of the family.

“We had to take care of all those kids after my mother passed away,” Alice said.

Before her mother died, when she was 15, Alice worked as a type of nanny who would come in after the midwives delivered the babies to help take care of them. She added that working as a nanny helped prepare her to take care of her siblings.

Patrick remained a supportive, hardworking husband. He worked on the family farm alongside Alice, who said one of her favorite things to do with Patrick was work the fields and drive the tractor.

The Chasses learned the true power of community when their 36-year-old daughter passed away from cancer. When she was sick, a lot of people reached out to them to help and give support, according to Patrick.

“Around here they do that, but not in the city,” he said.

Aline Cyr left behind two children in their father’s care, though the Chasses lived right across the street from them and were always available to help out when needed.

When Alice was 55, she began working with the elderly at the Aroostook Area on Aging as a volunteer and continued to do so until she turned 81. She would help fill out important paperwork such as for food stamps, Medicare and other forms that folks sometimes found difficult.

“I would help the people fill out their paperwork because they didn’t understand how to do those things,” Alice said. “Some would cry because they had no help, so I started volunteering. There was one that was crying so bad, they had to telephone me so I would go even though I wasn’t working.”

Alice wasn’t the only one in the pair to do good in their lifetime. Patrick was also a volunteer firefighter for 16 years for the town of Frenchville. He became known for always being available to lend a helping hand to other farmers who needed assistance.

“When there was somebody having a hard time, we’d go help them,” Patrick said.

Both Chasses had long been involved with the church, and said they helped spruce up the church when their priest, Father Angelo, wanted to give the inside of the building a good cleaning.

Patrick said the most admirable thing about his wife, who has “spent her whole life helping others,” is that she is a caring, loving wife, a good mother — and his best friend.

“We’re close together,” Alice said as she smiled at Patrick. “We love each other.”

The upper-level low pressure area that has been parked over southern New England will continue to stall there today into the overnight period then begin to open up and shift southeast into the Atlantic Thursday.
Campaign Corner END_OF_DOCUMENT_TOKEN_TO_BE_REPLACED

Dale Crafts filed his nomination papers for Feb. 21 with the Secretary of State to officially be placed on the primary ballot on June 9, 2020, for the U.S. House of Representatives 2nd District race.
Our Sponsors END_OF_DOCUMENT_TOKEN_TO_BE_REPLACED