Ted Shapiro, Special to the Fiddlehead Focus • July 9, 2019
Here in The County, we have big, bold, beautiful skies, along with wonderful, wide-open views to distant hills and mountains, and, lucky for us, in thunderstorm season, our “big sky” makes it easier to spot important weather clues.  While your app may just show “scattered showers and thunderstorms,” your eyes can tell you whether a thunderstorm might be forming in your proximity.

Here in The County, we have big, bold, beautiful skies, along with wonderful, wide-open views to distant hills and mountains, and, lucky for us, in thunderstorm season, our “big sky” makes it easier to spot important weather clues.

While your app may just show “scattered showers and thunderstorms,” your eyes can tell you whether a thunderstorm might be forming in your proximity.

I’ve described vertically developed cumulus clouds in previous columns, but now, with the help of the good folks at Northeast Publishing, I can show you in photographs the trend that you should be on the lookout for — the trend that tells you that showers or, more importantly, thunderstorms may develop. 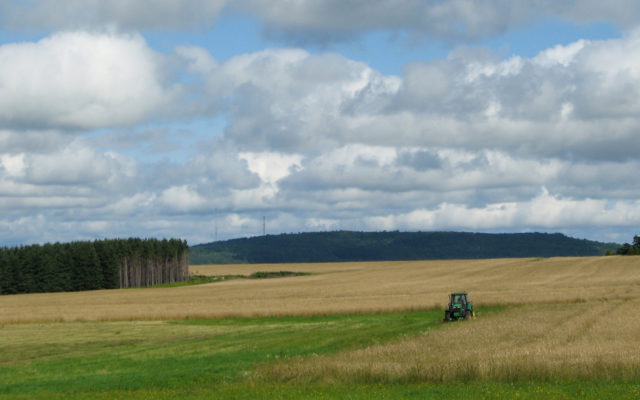 Notice in the first shot, that while the bottoms of the cumulus clouds are dark, the clouds themselves are not vertically developed, which is to say they are not very tall.

However, in the second shot, we see an important clue. 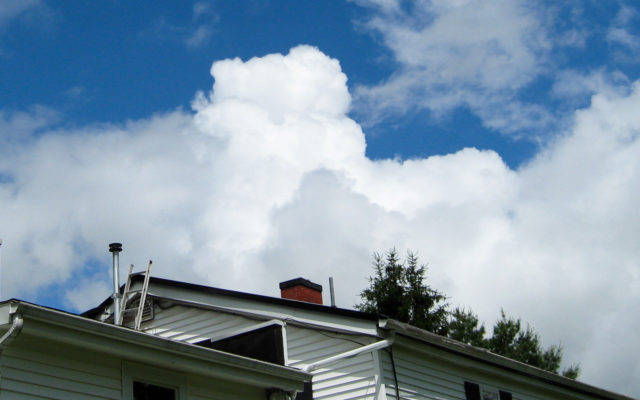 Above the chimney is a cloud that shows much more verticality than the clouds in photo one. Even though the bottoms of the clouds are dark in photo one, it is the fact that they are not tall that tells you they are not a thunder threat, nor will they be unless they start to get much taller. The cloud in photo two is just telling you that the atmosphere is set up in such a way that clouds may have the ability to get even taller and wider than the one jutting up above the chimney, and, as I like to say in summer, “When clouds get tall, rain may fall.” And while that’s true, from a safety perspective it’s the threat for lightning that’s of greater concern when those clouds get tall.

So, when enjoying our great outdoors in the summertime, always keep an eye to the sky, no matter what your app says. And if you see a trend where cumulus clouds are getting taller, keep paying attention, because you don’t want to be enjoying a summer day at the lake and then suddenly have what is shown in picture three on your doorstep. 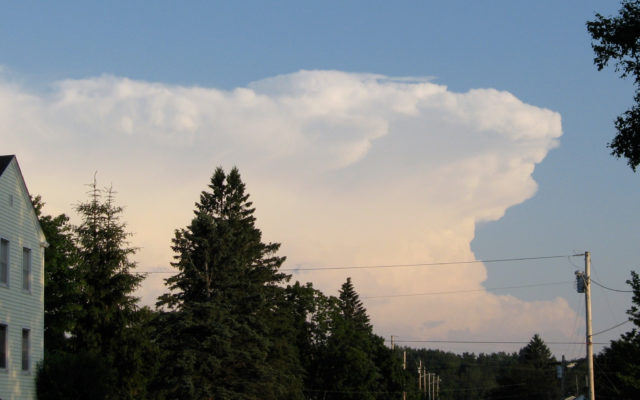 This shows a mature thunderstorm over Mars Hill as seen from Presque Isle on the Fourth of July, several years ago. The thunderstorm was generating nearly continuous within-cloud lightning, and as darkness fell, those enjoying the Limestone fireworks were treated to a sight almost as mesmerizing as the fireworks themselves. The sky was simply full of lightning to the southeast and remained that way for quite some time as the thunderstorm slowly drifted off to the southeast.

By the way, note the classic flat and extended anvil shape at the top of the cloud. This is a textbook-looking photo of a mature thunderstorm.

With lightning being the danger that it is, it is really sensible to learn how to use our always-available sky clues to see if a thunderstorm may be developing. Another tip: muggy days are good “thunderstorm candidate” days, as thunderstorms like to feed off of low-level moisture.

Now that it’s summertime, and the kids are out of school, learning more about clouds and weather clues could be a great family activity.

An excellent book on clouds and what they mean in terms of incoming weather is the Audubon Society’s Field Guide to North American Weather. I have used it in each semester of my weather observation course. And I’ve been teaching that for 20 years. That’s how good it is. And the good news? It doesn’t cost a bundle.

A warm front will approach the Valley today and cross the region this evening.
Campaign Corner END_OF_DOCUMENT_TOKEN_TO_BE_REPLACED

Dale Crafts filed his nomination papers for Feb. 21 with the Secretary of State to officially be placed on the primary ballot on June 9, 2020, for the U.S. House of Representatives 2nd District race.
Our Sponsors END_OF_DOCUMENT_TOKEN_TO_BE_REPLACED