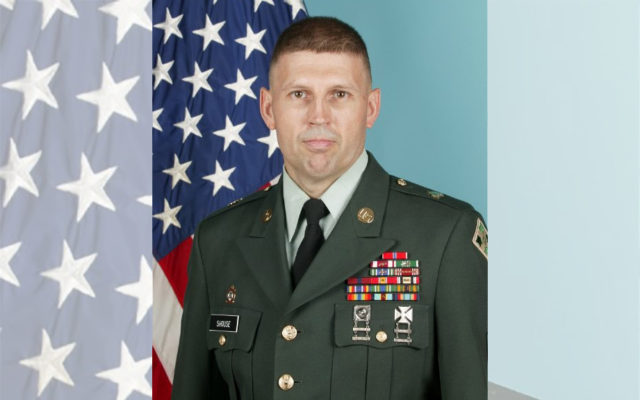 Contributed • July 9, 2019
The Meo Bosse Detachment 1414 Marine Corps League has named an Iraq War veteran to serve as the new coordinator for the Northern Aroostook Toys for Tots program.

AROOSTOOK COUNTY, Maine — The Meo Bosse Detachment 1414 Marine Corps League has named an Iraq War veteran to serve as the new coordinator for the Northern Aroostook Toys for Tots program.

Shouse and his wife Sheila have two children and reside in Fort Kent. Shouse, who is originally from California and grew up in the military, said that he met his wife while stationed at Camp Pendleton. She brought him to The County and he is happy the family settled in the region.

“I just love The County,” said Shouse. “I was pleased to find a Marine Corps League detachment and happy to take on the Toys for Tots program.  The program has done very well here and I hope to keep the tradition alive.”

The Toys for Tots program began in 1947 when the wife of a Marine Corps Maj. Bill Hendricks asked her husband to donate money to purchase toys for poor children at Christmas.  When he could find no organization to carry out her request, she asked him to start a program.

Managed by the Marine Corps Reserve since its beginning, the program has purchased 566 million toys and served 258 million children.  Toys for Tots is a top-rated charity; 96.7 percent of funds raised benefit the program. with only 2.8 percent used for fundraising and 0.5 percent for overhead.  The Marine Corps Toys for Tots Foundation was established in 1991. The nonprofit foundation now manages the program.

Shouse said that such performance speaks to the integrity of the program.

“When you see numbers like this you know that the program and the funds raised are benefiting children,” said Shouse, whose father served as a Green Beret Special Forces in Vietnam.  “We want all of our donors to know that nearly 100 percent of all funds raised benefit children right here in northern Aroostook County”.

The Meo Bosse Detachment is also raising funds to sponsor country music singer Bill Dean, who will appear at the Caribou Performing Arts Center on Nov. 9. All proceeds from the concert will benefit Toys for Tots.

Businesses or individuals who would like to support the Toys for Tots program should contact Shouse by email at northernaroostooktoysfortotsprogram@gmail.com.

A cold front will cross the region today associated with the upper trough and low which will absorb the remnants of Isaias in Canada.
Our Sponsors END_OF_DOCUMENT_TOKEN_TO_BE_REPLACED