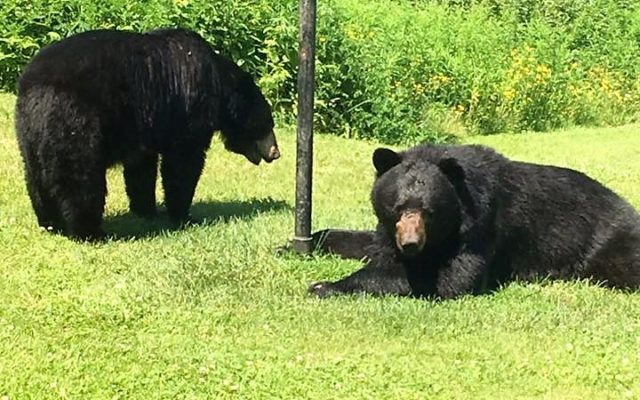 Jessica Potila, SJVT / FhF Staff Writer • July 7, 2019
A Fourth of July family picnic in St. David was a bit more interesting than usual when a couple of black bears dropped by the home of Skip and Patti Fletcher.

ST. DAVID, Maine — A Fourth of July family picnic in St. David was a bit more interesting than usual when a couple of black bears dropped by the home of Skip and Patti Fletcher.

The bears, one female and one very large male, were not entirely unexpected guests.

“Bears come through here quite often,” Patti Fletcher said. “Since we’ve lived here we see them often. We feed the birds in the winter. Of course, there are leftover seeds on the ground from winter and I think that’s what attracts them originally. We can’t have the feeder out there in the summer.”

Among the human guests at the picnic were the Fletchers’ daughter Marsha Robichaud and son-in-law Jake Robichaud and their children from Fort Kent. The Robichauds’ 14-year-old daughter, Rebekah, photographed the bears from the safety of her grandparents’ home.

Fletcher said the bears who visit their property have so far been polite guests.

“They’ve never caused a problem,” she said. “In fact, we watch them from inside and if we open the window and say something they tear off.”

“Everyone says they more afraid of us than we are of them,” Fletcher added.

That being said, Fletcher pointed out that she and her family allow the bears their personal space when the come for a visit.

“We respect them, you know,” she said.

Still, one of the bears that visited on Independence Day concerned Fletcher.

“That huge male, he was scary. The head on him he was just massive. I’ve never seen such a big bear. If he would hang around much, we’d have to call someone to have him removed,” she said.

Fletcher added that she would not want any harm to come to the bears and surmised that the male bear was most likely seeking out the female bear and will move on shortly.

“I doubt we’ll even see the male again,” she said.

Just two days after the picnic, on Saturday, Fletcher said a young bear that she guessed to be about 2 years old visited the property, followed later by a moose.

“This is bear country I guess,” she said. “We see a lot of animals. We enjoy it.”

As the Maine Turnpike expects 1 million travelers alone over the Labor Day weekend, policymakers are gearing up for a sprint to solve one of the state’s most intractable problems: a long-standing — and growing — transportation funding gap.
Apex Weather END_OF_DOCUMENT_TOKEN_TO_BE_REPLACED

Mostly cloudy skies will develop after midnight as a warm front moves across the area with some snow flurries possible overnight.
Our Sponsors END_OF_DOCUMENT_TOKEN_TO_BE_REPLACED