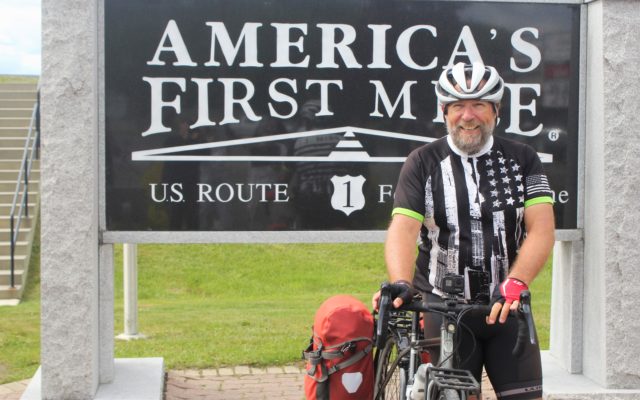 FORT KENT, Maine — Despite an up-country journey that at times included aggressive motor vehicle traffic and at one point a giant highway-slithering snake, cancer warrior Robert Bryant successfully rode a bicycle more than 2,000 miles from Key West, Florida, to the America’s First Mile monument in Fort Kent, where he arrived on Saturday.

Bryant set out on his bicycle in late March for the 2,369-mile journey on the longest north-south stretch of road in the country to raise funds for cancer research.

Bryant said he has quite a few family members and friends who have been diagnosed with cancer and wants to try to raise money for a cure for the disease, as he feels current treatments for cancer are inadequate and often leave patients with a poor quality of life, if they survive.

“Cancer affects everyone,” Bryant, a Pittsfield native who currently resides in Parkland, Florida, said after he arrived at the monument. “When I did this, I was looking to do something bigger than myself.”

His journey from Key West took him through multiple states, including Georgia, where he encountered something other than a moose or deer on the road.

“A 6-foot snake was taking up the road. I scooted it along,” he said. “It was kind of cool to see a water moccasin cross the road. There has got to be a joke somewhere about that.”

Another concern Bryant had related to drivers along the northernmost part of his journey.

“I heard horror stories about pulp trucks in northern Maine, but they were very courteous and not a problem at all,” Bryant said. “The bigger issues were in the urban areas. [Those drivers] were a little more aggressive.”

Bryant said he was relieved Saturday to realize he was just a few miles away from his final destination at the America’s First Mile monumnet.

“Once I hit the ‘Welcome to Fort Kent’ sign I thought it was all the way downhill from there,” the 59 year-old Bryant said. “There were three more hills. I just pedaled like hell,”

Several members of the Fort Kent community met Bryant at the monument to celebrate his achievement, as did many of Bryant’s loved ones who greeted him with a bottle of champagne.

Travis Guy, chair of Fort Kent-based Edgar J.Paradis Cancer Fund, was one of the people who greeted Bryant on Saturday. Guy expressed his appreciation for Bryant’s efforts to fight cancer.

“So many people are affected by cancer, not only in our area but everywhere,” Guy said.

“It’s very impressive what he did,” Richard Bryant said. “He’s a very goal-oriented person. If he says he’s going to do something, he’s pretty much going to do it.”

Robert Bryant said the most memorable part of his bicycle journey occurred near the end when he crossed from New Hampshire into Maine at Salmon Falls River.

“It was spectacularly beautiful,” Bryant said. “And I was home.”

An upper-level trough will slide across the region today through Friday.
Our Sponsors END_OF_DOCUMENT_TOKEN_TO_BE_REPLACED