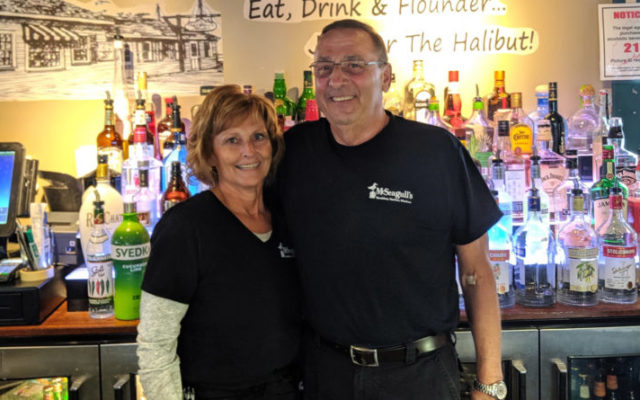 LePage is bartending in Maine this summer

The two-term former Republican governor is tending bar at McSeagulls Restaurant in Boothbay Harbor this summer, owner Jeff Stoddard said Friday. Stoddard said he hadn’t finalized the governor’s schedule yet, but he anticipated LePage will work the entire summer at the seaside restaurant, where the governor’s wife, Ann, and daughter, Lauren, have worked as servers in previous years. Ann LePage will also return this summer to McSeagulls as a server.

Friday evening, a picture of Paul and Ann LePage wearing McSeagulls t-shirts was posted to the restaurant’s Facebook page with the caption: “The dream team is ready to serve you this evening. Ann has tables and Paul is behind the bar.”

LePage did not respond to a request for comment. Stoddard, who said he has known LePage since before he was governor, declined to provide details about how the arrangement came about, or what he would be paid.

“He was looking for something to do this summer and it just seemed like a natural thing to do,” Stoddard said.

Working the summer at a coastal restaurant might be normal for the LePages, and thousands of other Mainers, but it is unusual for a former governor, especially one who is now 70 years old.

Many governors leave office and go on to become ambassadors or serve in cabinet positions, according to National Governors Association spokesperson James Nash. Others “go back into private life and serve on corporate boards or serve as attorneys. Many go into academia and teach political science,” said Nash, who declined to comment about LePage’s new job.

LePage’s Democratic predecessor, Gov. John Baldacci, served in the Obama administration after leaving office before joining law firm Pierce Atwood in 2012. He also serves on the corporate board of Avangrid, the parent company of Central Maine Power, which pays him $200,000 a year. Sen. Angus King, who served as Maine’s chief executive from 1995 to 2003, took his family on a 5 ½-month RV trip across the U.S. upon leaving the Blaine House. He later taught at Bates and Bowdoin colleges, started a wind energy company and served on several corporate boards before winning a U.S. Senate seat in 2012.

LePage has not joined any boards and despite what he described as “overtures” from the Trump administration, he has not publicly taken any job since leaving office, although he did take an unpaid position as the honorary chair of the conservative political nonprofit Maine People Before Politics earlier this year. Before he was governor, LePage was mayor of Waterville and had a successful business career, which included running his own consulting firm and serving as general manager of retail chain Marden’s.

When asked if LePage was hired as a publicity stunt, Stoddard bristled.

“You have any idea how hard it is to find workers?” he asked. “I will take good honest reliable help any day.”

The LePages previously owned a house in Boothbay Harbor, which they bought in 2014 and sold last year. The former governor made headlines in November when he said he would retire to Florida, where he owns property, upon leaving office. He also said he was looking at landing a teaching job in the state. But no teaching job has been announced.

Stoddard said he isn’t worried about the customer service skills of the famously combative LePage, who told the NAACP to “kiss my butt” and left an obscene voicemail on a legislator’s phone while in office.

“I think what the public sees from Governor LePage is totally different from how he is when he is not trying to protect our entire state,” Stoddard said. He also said he wasn’t worried about having an employee who hadn’t had to report to a boss in nearly a decade.

“We have a great training staff. We’ll be fine,” Stoddard said.

Maine is more than eight months into Medicaid expansion under the federal Affordable Care Act and trends around who is enrolling and where they live are starting to emerge, bucking some expectations and pointing out access challenges.
Apex Weather END_OF_DOCUMENT_TOKEN_TO_BE_REPLACED

A coastal low is expected to produce heavy snow across much of central and northern Maine Thursday night and Friday.
Campaign Corner END_OF_DOCUMENT_TOKEN_TO_BE_REPLACED

Dale Crafts filed his nomination papers for Feb. 21 with the Secretary of State to officially be placed on the primary ballot on June 9, 2020, for the U.S. House of Representatives 2nd District race.
Our Sponsors END_OF_DOCUMENT_TOKEN_TO_BE_REPLACED