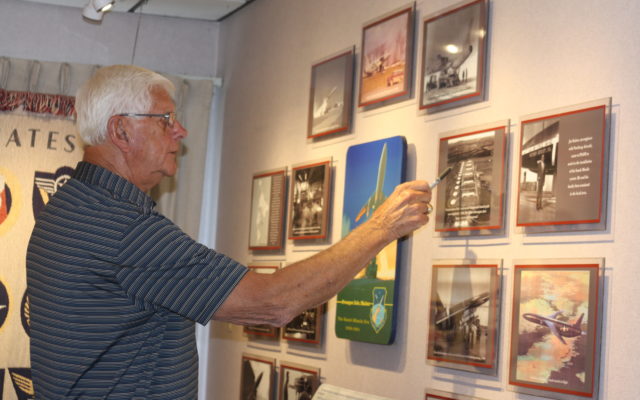 Melissa Lizotte • June 17, 2019
Throughout the 1940s and again during the 1950s and early 1960s, the former Presque Isle Air Force Base served as the final stop for thousands of U.S. pilots and crew members before they soared into the skies above the Atlantic Ocean, bound for European lands thousands of miles away.

PRESQUE ISLE, Maine — Throughout the 1940s and again during the 1950s and early 1960s, the former Presque Isle Air Force Base served as the final stop for thousands of U.S. pilots and crew members before they soared into the skies above the Atlantic Ocean, bound for European lands thousands of miles away.

“Presque Isle was the primary base used for all aircraft traveling to Europe. There were thousands of planes and thousands of servicemen that came through the base during its time here,” said Nate Grass, president of the board of directors for the Presque Isle Air Museum. 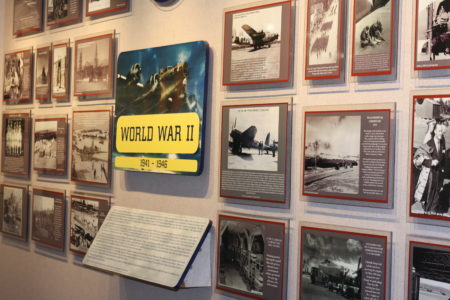 That history is one that Grass is always willing to share with folks who stop in to view the hundreds of photographs and original memorabilia that the Air Museum showcases.

The museum focuses on the airport’s history from its humble beginnings as a small commercial aircraft hangar in the 1930s to a U.S. Army airfield, then a base, to an industrial park that includes numerous industrial-based companies, Presque Isle Middle School and Northern Maine Community College. 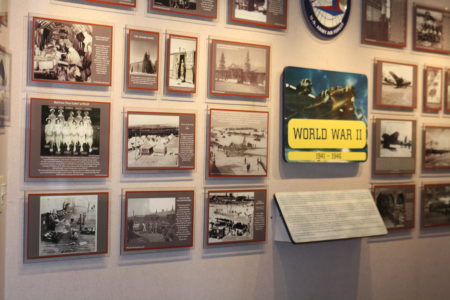 Due to northern Maine being the land mass in closest proximity to Europe — specifically to Moscow, Russia — Presque Isle was considered to be one of the most important bases in the United States.

Originally the base existed as the Presque Isle Army Air Field from 1941 until the end of World War II in 1945. The U.S. government reactivated the base as the Presque Isle Air Force Base in November 1950, with the mission of providing “air defense of the northeastern U.S. and Loring Air Force Base” in Limestone as the threat of missile strikes from the Soviet Union loomed large during the Cold War.

The base became the home of the 702nd Strategic Missile Wing on July 1, 1959, the country’s first Intercontinental Missile Base that was equipped with the SNARK Missile. SNARK was a high-altitude missile that was capable of delivering a nuclear bomb. Although the missiles were never used for battle, the possibility was always there if the Soviet Union chose to strike anywhere in the world with their own weapons. 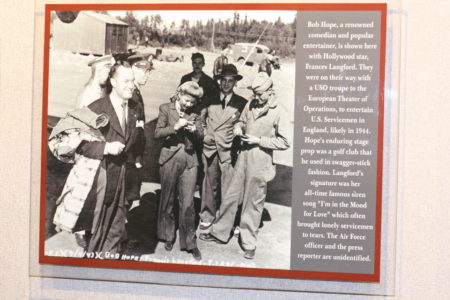 Hollywood performers Bob Hope (left) and Frances Langford were two of many entertainers who stopped at the Presque Isle Army Airfield before hopping on a plane to Europe for a USO tour during World War II.
(Staff photo/Melissa Lizotte)

The Presque Isle Air Force Base also has both historical and modern connections to the D-Day invasion of Normandy, France, that occurred on June 6, 1944. On Sunday, May 19, a squadron of 11 C-47 planes landed at Presque Isle International Airport to greet visitors, offer plane tours and refuel before heading to Europe for ceremonies related to the 75th anniversary of D-Day.

Following D-Day in 1944, more than 425,000 Allied and German troops were injured or killed during the two-month-long Battle of Normandy. In Presque Isle, the area that is now the NMCC campus was where the hospital for the Air Force base sat.

During World War II, the base became a common stop for many famous actors and performers, including Bob Hope and Frances Langford, who were on their way to Europe to entertain troops as part of tours with the United Service Organizations, or USO. 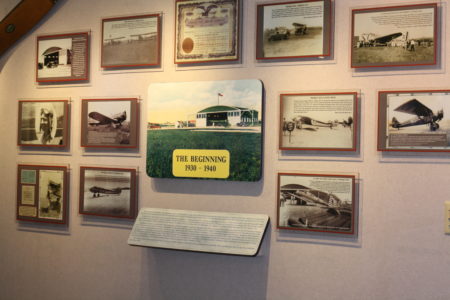 Famous actors such as Clark Gable and Jimmy Stewart, who were serving in the Army, Air Force and Air Corps, also spent time on the base and in the Presque Isle community.

“When Gable was in the Air Force, his plane broke down and so he stayed at the base for about a week,” Grass said. “He would go downtown to the hotel lounge and, from what I understand, he might’ve dated some of the ladies in town.”

In 1961, President John F. Kennedy declared the missile base “obsolete,” leading to the closure of the Air Force Base, which brought an estimated $8 million to Presque Isle and surrounding communities.

The Presque Isle Industrial Council soon formed in order to transform 440 acres into the Skyway Industrial Park and provide economic growth for the region. 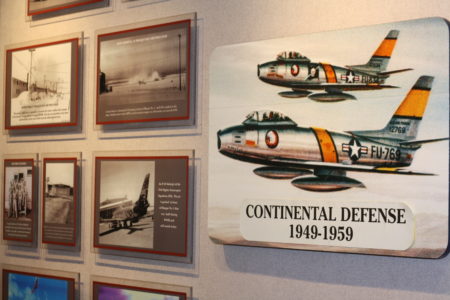 The Presque Isle Air Museum includes hundreds of photographs from the former Air Force base, including some from the period between 1949 and 1959 during “air defense of the northeastern United States and Loring Air Force Base” in Limestone.”
(Staff photo/Melissa Lizotte)

The Presque Isle Air Museum board of directors continues to expand the museum’s collections and recently received a donation of four photographs from local photographer Paul Cyr.

The photographs are of various military planes that have flown over Presque Isle throughout the past five years, including one of the C-47s that visited in May. To accommodate the photographs and other future donations, the board hopes to one day find a larger space to set up the museum. 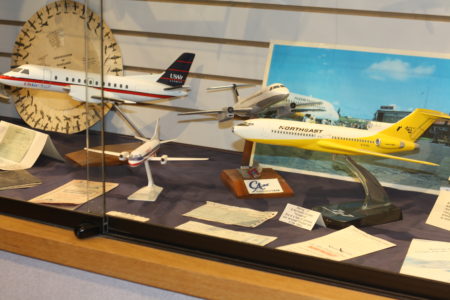 The Presque Isle Air Museum features models of commercial planes that the airport in Presque Isle carried during its early years, including Northeast Airlines and U.S. Air. The museum is located in what is now the Presque Isle International Airport.
(Staff photo/Melissa Lizotte)

In the meantime, Grass hopes that folks from both near and far will visit the Air Museum and learn about the unique role that the Presque Isle Air Force Base played in world history.

“It’s even more important for us to preserve this history because over time people tend to forget,” Grass said. “We have to keep it going so that people remember.” 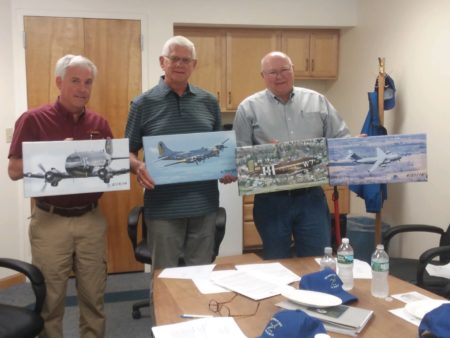 Local photographer Paul Cyr (right) recently donated four photographs of military planes that have flown over Presque Isle in recent years to the Presque Isle Air Museum. Pictured with Cyr on Wednesday, June 12, the 20th anniversary of the museum, are pilot Gene Lynch (left) and Nate Grass, president of the museum’s board of directors.
(Courtesy of Kim Smith)

Only one member of Maine’s congressional delegation had come out in favor of impeaching President Donald Trump ahead of House Speaker Nancy Pelosi’s Tuesday announcement that the Democratic-led House of Representatives would begin an impeachment inquiry.
Apex Weather END_OF_DOCUMENT_TOKEN_TO_BE_REPLACED

High pressure will bring mostly clear to partly cloudy skies to northern Maine today and tonight as low-pressure slides east of the region in the southern part of the state.
Campaign Corner END_OF_DOCUMENT_TOKEN_TO_BE_REPLACED

Dale Crafts filed his nomination papers for Feb. 21 with the Secretary of State to officially be placed on the primary ballot on June 9, 2020, for the U.S. House of Representatives 2nd District race.
Our Sponsors END_OF_DOCUMENT_TOKEN_TO_BE_REPLACED