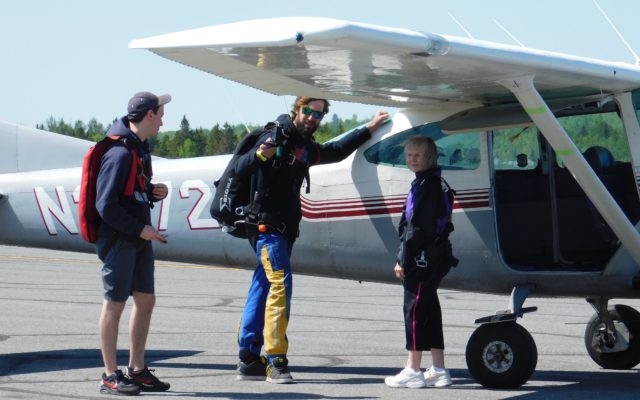 West would have graduated from Van Buren High School with his class on Friday night. The next day, Theriault crossed off a wish that had been on both of their bucket lists before he died. 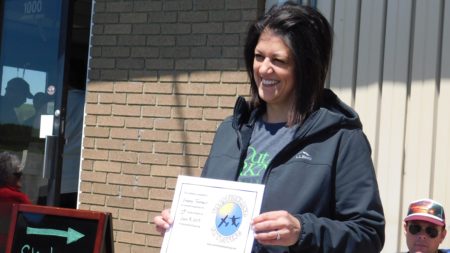 Theriault said that it was a way to honor the life of her son and celebrate his memory.

Like Theriault, many of the people tried skydiving on Saturday, June 8, to share an experience with a loved one.

Delaney Williams, 22, bought her father Seth the skydiving package for Father’s Day. Seth said it was “quite a shocker, actually,” because skydiving was never something he had planned to do in his life.

But when his daughter surprised him with the gift, he agreed to jump with her.

April Caron, 72, had a similar reason. Like Williams, she had never planned on skydiving in her life. “It wasn’t even on my bucket list,” she said. But when a young woman she mentors signed up and needed a partner, Caron volunteered. 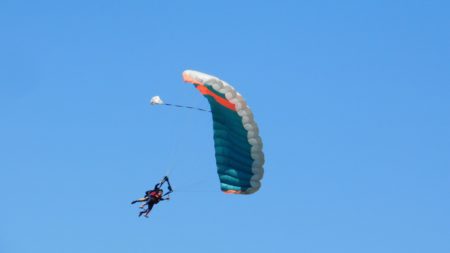 This is the third year SAD 1 has offered the skydiving program, according to Amanda Conroy, the personal enrichment coordinator. Conroy said the Adult and Community Education program initially came up with the idea to introduce skydiving as a way to offer something new to County residents who otherwise may have never thought about doing it.

“It’s always very well received,” said Conroy. For the past few years, SAD 1 has teamed up with Vacationland Skydiving, a company based in Pittsfield, to bring skydiving to Aroostook County.

Whether they’ve always wanted to do it, or decided to on a whim, the jumpers overcame their nerves and took the leap.

“People jump for all kinds of reasons. You’ve just gotta find yours,” a team member of Vacationland Skydiving said.

Only one member of Maine’s congressional delegation had come out in favor of impeaching President Donald Trump ahead of House Speaker Nancy Pelosi’s Tuesday announcement that the Democratic-led House of Representatives would begin an impeachment inquiry.
Apex Weather END_OF_DOCUMENT_TOKEN_TO_BE_REPLACED

A strong upper-ridge anchored off the Southeastern US coast will bring warmer and more humid than normal conditions to the Valley through the late week period.
Campaign Corner END_OF_DOCUMENT_TOKEN_TO_BE_REPLACED

Dale Crafts filed his nomination papers for Feb. 21 with the Secretary of State to officially be placed on the primary ballot on June 9, 2020, for the U.S. House of Representatives 2nd District race.
Our Sponsors END_OF_DOCUMENT_TOKEN_TO_BE_REPLACED