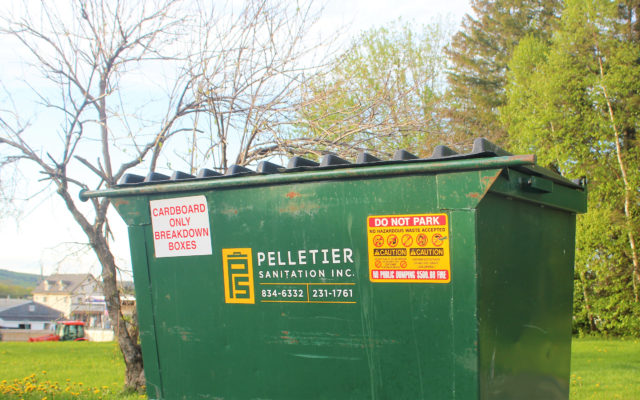 Jessica Potila, SJVT / FhF Staff Writer • June 6, 2019
On Tuesday morning, Pelletier Sanitation Inc. of Fort Kent placed a post on their company Facebook page seeking new employees; by Wednesday afternoon, the trash collection service announced on the same page that it was going out of business.

FORT KENT, Maine — On Tuesday morning, Pelletier Sanitation Inc. of Fort Kent placed a post on their company Facebook page seeking new employees; by Wednesday afternoon, the trash collection service announced on the same page that it was going out of business.

“Effective immediately and as of 5:00 pm Wednesday, June 5th 2019, Pelletier Sanitation Inc. will be CLOSED and NO LONGER OPEN FOR BUSINESS,” the Wednesday afternoon Facebook post read. “Customers can bring their garbage to their community recycling facility or contact another sanitation company for your garbage removal. We will be removing dumpsters as quickly as we can.”

The abrupt announcement that the company would be closing came as a surprise to Pelletier Sanitation Inc. customers, whom the business did not notify other than through the Facebook post.

Those affected immediately began scrambling to find alternative sources of trash disposal. Among those customers was Andrea Norris of Wallagrass.

“I just happened to come across the (Facebook) post,” Norris said on Wednesday evening. “We had no notice at all; our trash was on the side of the road for pick up tomorrow morning.”

Norris said she had been satisfied with Pelletier Sanitation’s service prior to their closure.

“They were dependable,” she said.

“In the past when we’ve had some remodeling done we’ve used Saucier’s,” Norris said.

“We gave them a call and they were very accommodating.”

“It’s taken us by surprise. The phone has been ringing off the hook,” he said. “I don’t want to go and say we can do it all, but we’re gonna try and figure it out; we don’t want to leave people stranded.”

Saucier added. “And there is Deschaine’s from Madawaska who comes into Fort Kent also. Todd (Deschaine), he’s a good guy. It’s just gonna be me and Todd, I guess.”

“We’ve been getting all kinds of calls from people who want their trash picked up. People didn’t know Mr. Pelletier was shutting his doors,” Deschaine said Wednesday evening.

“It was in our family for over 50 years,” Randy Saucier said on Wednesday afternoon. “It is a very good business and we had the majority of the Fort Kent area. But we ran our business and we worked with our people and made sure it was 100 percent satisfaction.”

“The business is a profitable business. My father was the owner and was looking to retire. I grew up in the business and I wanted a change,” Saucier added.

Saucier said that at the time he sold Saucier Sanitation, the customer base exceeded 1,000.

Deschaine offered his support for the Pelletiers as well as some insight into the challenges of operating a trash removal service.

“Edgar and Laurie supported families by employing people,” Deschaine said. “They’re good people and they’re human. I have nothing bad to say about them.”

“Being in the garbage business is really tough. You gotta be a really tough person to be in the elements of rain, sunshine or snow, Not everybody pays, and in this day and age it’s hard to find good help,” Deschaine added. “It’s hard and having your garbage hauled by a company, it’s a luxury. You can either bring your own or hire someone to haul it.”

Deschaine, who already operates in the Fort Kent area, said that he, like Rick Saucier, is ready to take on new business.

As the Maine Turnpike expects 1 million travelers alone over the Labor Day weekend, policymakers are gearing up for a sprint to solve one of the state’s most intractable problems: a long-standing — and growing — transportation funding gap.
Apex Weather END_OF_DOCUMENT_TOKEN_TO_BE_REPLACED

Mostly cloudy skies will develop after midnight as a warm front moves across the area with some snow flurries possible overnight.
Our Sponsors END_OF_DOCUMENT_TOKEN_TO_BE_REPLACED