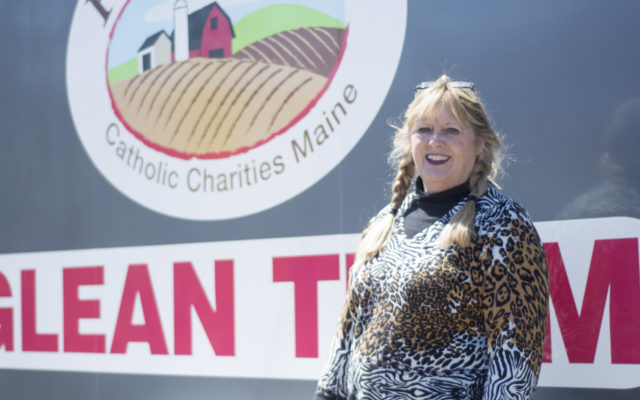 Chris Bouchard • May 22, 2019
Dixie Lee Shaw, 64, of Presque Isle, has dedicated decades of her life ensuring that people in The County aren’t going hungry.

Dixie Lee Shaw, 64, of Presque Isle, has dedicated decades of her life ensuring that people in The County aren’t going hungry.

Shaw currently works as the director of Hunger and Relief Services at Catholic Charities, and doesn’t plan on retiring anytime soon. Just last year, she said the program shipped out 1,593,876 pounds of food from its banks in Caribou and Monticello, bound for 24 pantries throughout The County.

Born in Mars Hill in 1954 and raised in Bridgewater, Shaw spent her childhood playing with friends outside in a town so close to the border that “You could chuck a rock at the Customs house.”

Back then, she said, U.S. Customs would just put on a siren if someone crossed over without stopping. At 8 years old, Shaw and her friends would stop illegal crossers for fun.

“If it was during the summer,” she said, “we’d run out and stop the car. We’d just stand in the middle of the road and tell them ‘Hey, you just went through the border. You were supposed to stop.’”

Shaw joked that she’s going to eventually put in for retirement from Customs and Border Protection since she spent much of her childhood helping them stop Canadian crossers.

Years later, Shaw married a Canadian potato farmer, which she said “was inevitable.” They lived in Canada for six years until “the farm went broke,” and had to move back to Maine.

“It happens to a lot of family farms,” Shaw explained, “and unfortunately this time it happened on our watch.”

At first, they stayed in a hotel, and soon found a small house in Bridgewater. The home didn’t have running water or heat, and the roof was constantly leaking. Her husband purchased a truck that cost roughly $1,400 a month and started trucking to support the family while Shaw dealt with a never-ending series of problems at the small house.

“I was against him becoming a trucker,” said Shaw, “because my father was a trucker and I knew that they were never home. It’s hard for a family to live when the husband is gone all the time.”

Then, on Christmas Eve of 1978, Shaw said her husband totaled the truck and, while he was fine, they still had to make payments on a non-operational vehicle.

Eventually, she and her husband divorced; however, the experience of living without much money, heat or water, dealing with unexpected moments when the electric company would shut off the power, and learning to split wood, is one that she looks back on fondly and has never forgotten.

Shortly afterward Shaw attended the University of Maine at Presque Isle to study law enforcement. This led to a position helping juveniles who were out on conditional release, a job she loved. Later, she applied for a probation officer job in Caribou.

“I messed it up so badly,” she said of the interview. “I couldn’t even talk. Imagine that, Dixie Shaw couldn’t talk. That does not happen. So I really believe it was God who said, ‘This is not where you need to be.’”

Shaw, a lifelong Baptist, instead began a career as the Catholic Charities Youth Services director, and in 1994 became the Home Supplies and Food Bank director.

Shaw said she works six days a week because she knows that 100 percent of the money goes directly to feeding the people of Aroostook County, a cause for which she is intensely passionate.