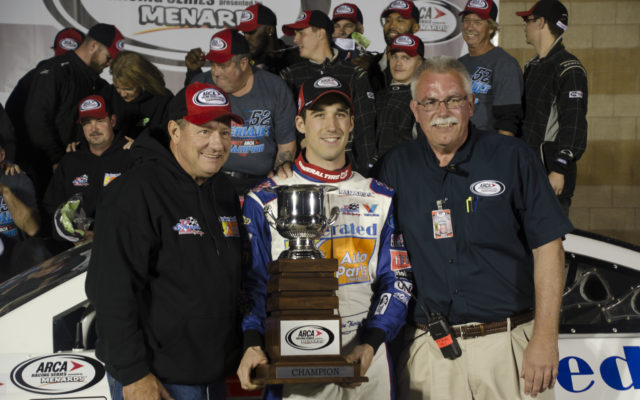 Theriault said he is negotiating with an established race team to drive in the Foxwoods Resort Casino 301 on July 21 at New Hampshire Motor Speedway in Loudon. He declined to reveal the team.

The 25-year-old Theriault said he is trying to line up sponsors.

“It’s progressing,” Theriault said. “It’s no different than any other sport. You have to make sure all your ducks are lined up and the sponsorship is there.”

Theriault has run in two NASCAR Gander Outdoors Truck Series races with the Ricky Benton Racing Enterprises team this season. He failed to qualify in the first race by hundredths of a second and finished 22nd in the next race.

If Theriault can complete a deal and qualifies for the Foxwoods Resort Casino 301, he would become the first Maine native to drive at NASCAR’s highest level. Ricky Craven of Newburgh raced in the EA Sports 500 at Talladega Superspeedway on Oct. 3, 2004.

Theriault said he has received positive feedback from potential sponsors in New England and the Northeast.

Connecticut native Joey Logano is the only Monster Energy Cup regular from New England. Eddie MacDonald of Rowley, Massachusetts, ran one race each in 2014, ’15 and ’16.

New Hampshire Motor Speedway is the only New England track to hold a Monster Energy Cup race for decades. Theriault said this race provides New England companies with an “intriguing opportunity to dip their toes into NASCAR” by sponsoring a Maine driver.

“Sponsors love to work with people at the Cup level. They may have never had that opportunity before to align with someone who was able to represent them,” Theriault said.

Theriault said he has raced at least five times, in different divisions, at Loudon.

“It would certainly be a challenge. You have a lot of long, green-flag runs there,” said Theriault, whose efforts in Loudon include some top-10 finishes.

Landing a Cup ride for that race would be valuable in getting him exposure and giving him a chance to build relationships with people and sponsors that could lead to future opportunities.

“You have to have a positive attitude,” Theriault said. “You do the best you can and people will recognize if you are able to overperform. It also gives you great experience.”

Theriault said Archie St. Hilaire of Old Orchard Beach, who owns the Go FAS Racing team and has a full-time driver in Corey LaJoie, has given him advice and helped him make Cup connections.

“He has been as much of a mentor as he can be in this process,” Theriault said.

Theriault drove for St. Hilaire in the K and N Pro Series East series in 2012 at Loudon as part of the Mainely Motorsports Young Guns Challenge.

As the Maine Turnpike expects 1 million travelers alone over the Labor Day weekend, policymakers are gearing up for a sprint to solve one of the state’s most intractable problems: a long-standing — and growing — transportation funding gap.
Apex Weather END_OF_DOCUMENT_TOKEN_TO_BE_REPLACED

The Valley will receive an inch or less of accumulation from Thursday's system based on current forecast model data.
Our Sponsors END_OF_DOCUMENT_TOKEN_TO_BE_REPLACED