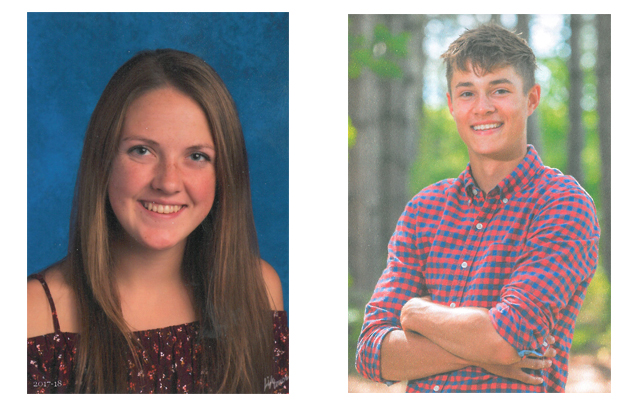 Joseph Cyr • May 15, 2019
Two Aroostook County students will be among the numerous honorees at the Maine Sports Legends Hall of Honors induction ceremony next month.

PRESQUE ISLE, Maine — Two Aroostook County students will be among the numerous honorees at the Maine Sports Legends Hall of Honors induction ceremony next month.

According to Susan Lougee, representative for the northern region for Maine Sports Legends, the student awards are presented to one male and one female athlete from each region. This year’s student honorees from the north are Madison Jandreau of Presque Isle and Alex Ezzy of Caribou. The two students will receive a $750 award for their accomplishment.

The students will be honored at the annual banquet at 1 p.m. June 23, at Jeff’s Catering in Brewer, where they will be joined by those representatives being enshrined in the Hall of Honors. The three representatives from the northern region are Peter Webb, Kevin Sjoberg and the late G. Caroline Morris. Representatives from eastern Maine are William “Pop” Mangum and Steve Vanidestine; and from Central Maine, Tom Warren and Amy Vachon.

In cross country, she was an All-Aroostook and All PVC and state qualifier for all four of her high school years. In her three years of varsity basketball, her team made it to the Northern Maine Finals in her junior year, and she was selected to the Big East Senior All-Star Game. In track and field, she was an All-Aroostook and All PVC for four years and a state qualifier in the 3200 and 1600 meter races her junior year.

Along with varsity sports, Jandreau is a member of the National Honor Society, the Outdoor Club and the Varsity Club at Presque Isle High School. In the community, she is a Special Olympic volunteer, mentors elementary students, Girls on the Run volunteer, mentors students at Camp Invention, participates in the Maine Dance Academy and participates in music and theater.

Jandreau won the title of The Distinguished Young Woman of Maine 2019 and will compete in Mobile, Alabama, in June. Her goal is to become a doctor and she will attend Bates College as a biology major working toward being accepted into medical school.

Ezzy, the son of Richard and Kim Ezzy, graduates from Caribou High School this spring and is sixth in his class with an academic average of 95.1. He is the son of Richard and Kim Ezzy. Alex participated in Varsity Soccer, Varsity Baseball and Varsity Track and Field at Caribou High School. In Soccer, he was selected All State and All New England. His scoring of 25 goals is the second all-time at Caribou High School in a single season. He received the 2018 Butch Shaw Award in soccer his junior year. In the winter and spring months, he also participated in the Dutch Soccer Academy’s Premier Team in Camden. In Baseball, he was chosen captain of the team his junior and senior year. This year, his first year on the Track and Field Team, he has a goal to break the 4:50 time in the 1600 meter run. In addition to sports Alex is in the National Honor Society, the Gifted and Talented Program, the Math Team, peer tutoring in a variety of academic subjects, and has been a class officer all four years at Caribou High School. Alex has received the Maine Principal Association Award. In the community, Alex volunteered to coach various youth sports and is working at the Caribou Recreation and Parks Department. Alex will attend the University of Miami, majoring in engineering.

Only one member of Maine’s congressional delegation had come out in favor of impeaching President Donald Trump ahead of House Speaker Nancy Pelosi’s Tuesday announcement that the Democratic-led House of Representatives would begin an impeachment inquiry.
Apex Weather END_OF_DOCUMENT_TOKEN_TO_BE_REPLACED

A strong upper-ridge anchored off the Southeastern US coast will bring warmer and more humid than normal conditions to the Valley through the late week period.
Campaign Corner END_OF_DOCUMENT_TOKEN_TO_BE_REPLACED

Dale Crafts filed his nomination papers for Feb. 21 with the Secretary of State to officially be placed on the primary ballot on June 9, 2020, for the U.S. House of Representatives 2nd District race.
Our Sponsors END_OF_DOCUMENT_TOKEN_TO_BE_REPLACED