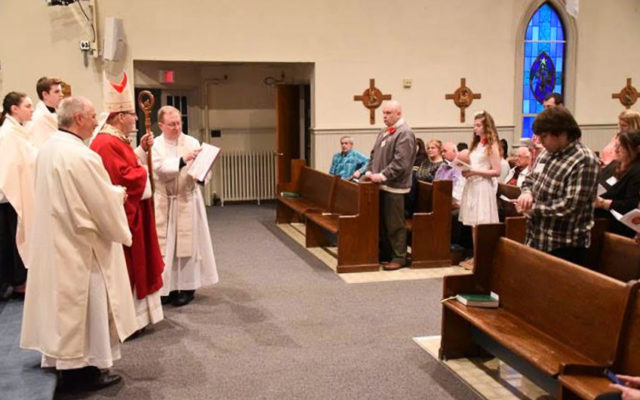 Contributed • May 15, 2019
Joined by family and friends, eight already-baptized Catholic teenagers and adults from Aroostook County received the sacrament of confirmation, and in some cases First Communion, during a Mass celebrated by Bishop Robert P. Deeley on Friday, May 3, at the Nativity of the Blessed Virgin Mary Church in Presque Isle.

PRESQUE ISLE, Maine — Joined by family and friends, eight already-baptized Catholic teenagers and adults from Aroostook County received the sacrament of confirmation, and in some cases First Communion, during a Mass celebrated by Bishop Robert P. Deeley on Friday, May 3, at the Nativity of the Blessed Virgin Mary Church in Presque Isle.

“It is a blessing to be with you this evening as we celebrate these sacraments together and as all these graces take place in our presence,” the bishop said. “This is a holy night.”

During the Easter Vigil, people who had been baptized in other faiths received the initiation sacraments and were welcomed into full communion with the Catholic Church. The Mass in Presque Isle, along with others planned in Brewer and Falmouth, allow already baptized Catholics to finish their initiation and receive those same sacramental graces.

“This is the Church, the extension of Jesus’s presence throughout the earth. And you are the Church, you who receive these sacraments this evening,” the bishop said.

Those receiving the sacraments came from Parish of the Precious Blood in Caribou and St. Peter Chanel Parish in Van Buren.

They included Tina Tompkins from Mapleton. Baptized Catholic, Tompkins said she had looked into another faith tradition for a while, but the death of her father and her marriage two years ago to a man who is a devout Catholic brought her back to her roots.

“I quickly realized that this is what I needed to do to make us stronger and closer,” she said. “I’m 55 years old, and I decided it’s not too late.”

She said getting older, the passing of her father, and the desire to help her children grow in faith, all made her realize this was a step she needed to take.

“I think what it means for me overall is a sense of peace, a sense of belonging. I’m very happy to be part of the Catholic family,” said Tompkins.

David Hricak credits God for helping all the pieces fall into place for him. Now living in Florida, he traveled to Fort Fairfield at Easter to visit his dying father. With his flight delayed by storms, he prayed he would make it in time to share some final moments with his dad and says he is thankful to God that his prayers were answered.

“I just prayed that he would open his eyes, and he actually did on Wednesday for three days. It was a true blessing,” Hricak said. “I told him I was proud of him, the way he mentored me and was a friend to me. He just opened his eyes, and he thanked me, and I told him I loved him, and he hugged me.”

Hricak said receiving the sacrament of confirmation was something he always planned to do, but his father’s passing and meeting Father Dave Raymond, who was present when David’s father died, made him realize he was being called to do it now. His father had been active in the Church, having served as sexton at St. Denis in Fort Fairfield.

Hricak chose Denis as his confirmation name because of his father’s involvement at St. Denis Church and because his father was born on St. Denis’s feast day.

“The saint picked me,” he said.

Hricak was confirmed during the Mass in Presque Isle, but waited to receive first Eucharist during his father’s funeral Mass, which also happened to be on the same day as his mother’s birthday.

For 14-year-old Jessica Soucy of Caribou, continuing her faith journey and receiving the sacrament of confirmation was a way to honor her grandmother’s wishes.

“It was a promise to my mémère, and I just wanted to take the next step in following my faith,” she said.

Soucy said she has been studying the faith for several months now and believes it helped her have a greater appreciation for the sacraments she was receiving.

“I feel like I’ve learned a lot more than I knew before the lessons I had, and I feel, since I’m older, I can understand it a lot more,” she said. “This is the point that we’ve been working up to, and it will continue throughout my life.”

Leeann Ouellette from Van Buren said it, too, was her grandmother who helped her want to more fully connect with her faith.

“My grandmother recently passed away, and she was a very firm believer in religion,” she said. “It’s one more stepping stone to be completely into the Church.”

Ouellette’s son and daughter also received the sacraments, pointing to their mother’s influence.

While parents, grandparents, and spouses often play important roles in faith journeys, for Nathalie Pinette from St. Peter Chanel Parish, it was her 8-year-old son, Elijah, who helped awaken her faith. Elijah has been a dedicated altar server ever since he received the sacraments.

“I became an altar server, and I made her want to do her first Communion, so when we go to church, she can walk up and get the bread,” he explained.

“It wasn’t until last year when my youngest son was confirmed that it kind of felt like a calling for me to pursue mine,” she said. “He has been along for the ride with me.”

Pinette said there have been two especially moving moments in her faith journey: having her feet washed during Holy Thursday Mass, with her son present as an altar server, and then attending the Easter Vigil Mass.

She said Elijah was so excited that she was going to receive the sacrament of confirmation that he asked her if he could attend the Mass with her, which he did, sitting by her side.

Only one member of Maine’s congressional delegation had come out in favor of impeaching President Donald Trump ahead of House Speaker Nancy Pelosi’s Tuesday announcement that the Democratic-led House of Representatives would begin an impeachment inquiry.
Apex Weather END_OF_DOCUMENT_TOKEN_TO_BE_REPLACED

A strong upper-ridge anchored off the Southeastern US coast will bring warmer and more humid than normal conditions to the Valley through the late week period.
Campaign Corner END_OF_DOCUMENT_TOKEN_TO_BE_REPLACED

Dale Crafts filed his nomination papers for Feb. 21 with the Secretary of State to officially be placed on the primary ballot on June 9, 2020, for the U.S. House of Representatives 2nd District race.
Our Sponsors END_OF_DOCUMENT_TOKEN_TO_BE_REPLACED