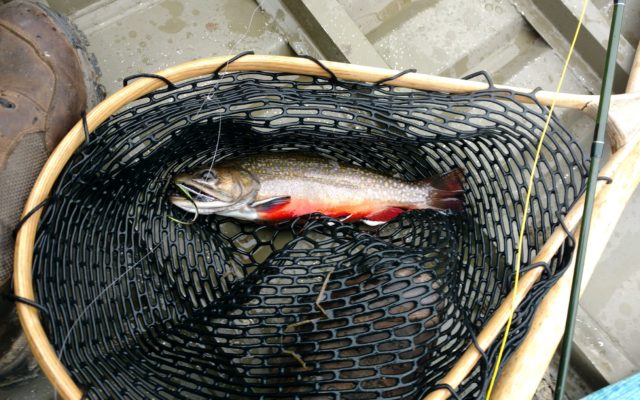 Bill Graves, Special to the Fiddlehead Focus • May 14, 2019
During May the streams and rivers throughout Aroostook County tend to be high, fast and often a bit off-color too.

During May the streams and rivers throughout Aroostook County tend to be high, fast and often a bit off-color too. This presents no great hurdle for shoreline bait and lure casters, but anglers who wish to wade and cast flies face a dilemma. It’s difficult to coax trout up from their bottom-hugging lies to strike a wet fly or streamer. The key is to get your feathered offering down to the fish and nothing works better than a well-tied weighted nymph. 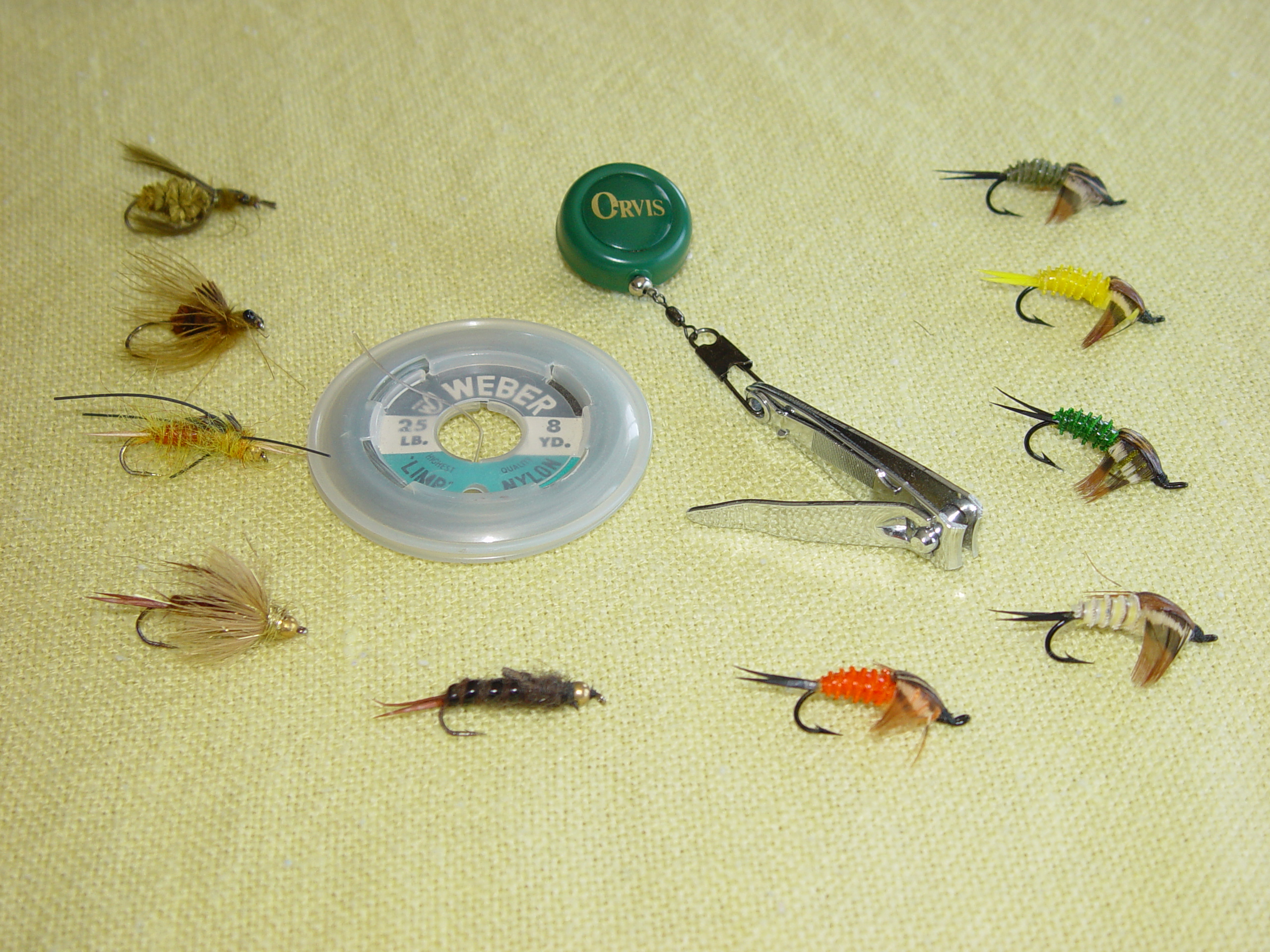 Nymph flies are tied in many shapes, sizes and colors, but most are weighted to help them swim near the bottom where the trout stay in spring water. Shown are several patterns effective on Aroostook streams. (Courtesy of Bill Graves)

Whereas most streamers imitate a bait fish or minnow in color, size, and shape as it swims along, nymph flies replicate aquatic insects rising from the bottom between the egg and adult stage. When fished correctly, nymphs are very realistic, and extremely effective in cold, high water conditions where trout are less likely to chase food or rise to the surface hatches. Properly presenting and retrieving a nymph takes a bit of finesse and the angler’s ability to recognize likely holding and feeding runs along spring waterways, but every fly caster can learn with a bit of practice.

Unlike many wet flies and streamers whose color resembles no real minnow, nymphs mimic real aquatics and hatching insects in shape, size and color. In another attempt to mimic real nymphs, most fly patterns are weighted to help them travel low in the current, near the bottom where a live nymph would be swimming trying to reach the surface.

During freshet conditions, trout tend to stay near bottom in slower runs away from high, cold fast moving current. Placing a food imitation swimming low and slow right near their chosen feeding lane will often draw a strike.

When building a nymph, fly tiers use three main methods to add weight and make the imitation move realistically through the water. Winding fine wire along the hook body before attaching fur and feathers over the weighted wire is one method. How many turns of wire will determine weight and how deep the finished fly will run.  For balance, it’s important to keep the wire centered on the hook shank so it’s not head or tail heavy, yielding an unnatural motion as it swings in the current.

Many nymph patterns use a gold or silver metal cone-shaped cylinder tied in place just behind the hook eye; weight and some flash are both achieved when tying conehead flies. The final option used to add weight as well as some realism is to tie in a small dumbbell-shaped weight that imitates a set of eyes at the head of the fly. Both of these shaped devices add at the front of the fly which helps it get low in the water, but also adds a dive and rise motion as the angler lightly bobs the rod tip.

Although the taxonomy and anatomical features of leeches are far different from nymphs, I use fly patterns of each interchangeably in early season water conditions. Winding wire on the hook shank of the leech flies allows them to get down where the fish are this month, just like the nymphs. Leech patterns tend to be longer and larger than most nymphs, but are different enough in shape and size to offer an effective alternative, I keep both styles of fly in the same spring box.

Out West on world renowned trout streams full of rainbows and browns, it’s common practice to use a streamer or dry fly as the main offering with a nymph pattern on a dropper line. This combo works well on Maine waters as well. Some regional anglers resort to a sinking tip line to aid sink rate in faster runs for salmon or trout. Also be sure to have at least a 7-foot leader, I prefer one 9 feet long so a 2- to 3-foot dropper line can be easily attached.

Among larger nymph patterns that are universally dependable would be a Clouser golden brown swimming nymph, fullback nymph, hare’s ear bead head, Lieb’s bug, Tellico and a Zug Bug. Those are tied on a size 4 through 10, 2X to 4X hook. Smaller nymphs on size 10 to size 16 regular shank hooks that are effective locally include a pheasant tail, birds nest, golden hare’s ear, copper John and prince. All of these can be tied body-weighted or with gold, silver or brass bead or cone heads.

As for leech patterns, I’ve found black, purple and olive to be top rate colors on size 4 to 10 long shank hooks. Look for patterns tied with marabou or rabbit tail strips and weighted with a cone head or eyes. Leech flies also offer consistent action when trolled on small ponds during the spring, and a dark-colored leech with a bright or shiny nymph dropper is a great combo.

Nymph flies are an often overlooked option during high, cold-water conditions in Maine. Many springs, anglers automatically turn to bait, and fly fishermen toss streamers or wait for better conditions. It’s time to try a nymph; the conditions are perfect right now and the results will be surprising and rewarding.

High pressure will bring mostly clear to partly cloudy skies to northern Maine today and tonight as low-pressure slides east of the region in the southern part of the state.
Campaign Corner END_OF_DOCUMENT_TOKEN_TO_BE_REPLACED

Dale Crafts filed his nomination papers for Feb. 21 with the Secretary of State to officially be placed on the primary ballot on June 9, 2020, for the U.S. House of Representatives 2nd District race.
Our Sponsors END_OF_DOCUMENT_TOKEN_TO_BE_REPLACED