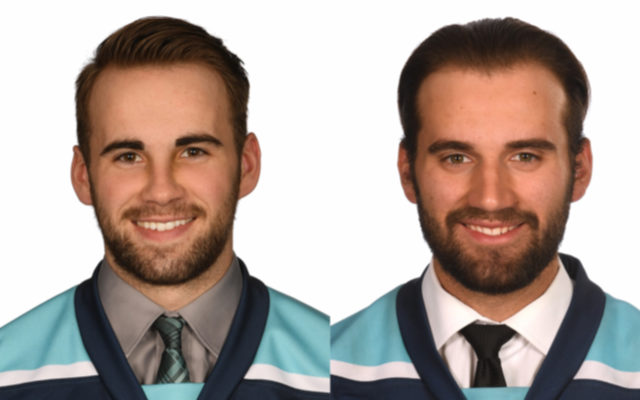 Vanier and King will play university hockey next season

Vanier will wear the Université de Moncton Aigles Bleus jersey and King will play for the St. Mary’s Huskies in Halifax. Both will compete in the Atlantic University Sport League (AUS).

Vanier will join his former Blizzard teammates, Alexandre Jacob and Alexandre Bernier, who played last season with the Aigles Bleus.

“I’m really happy,” said Blizzard’s number 91 of last season. “It (the University of Moncton) was my first choice. I cannot wait for the adventure to begin next September and return to play with two of my former teammates and friends. “

Vanier had an exceptional season with the Blizzard. He collected 31 goals and 32 assists for 63 points in 48 games, which earned him the team’s second-leading scorers behind Logan Johnston (71 points). His six winning goals were a team high. He is also the one who scored the most goals (2) for the Blizzard in the past series.

Note that Vanier is also an outstanding student who was enrolled full time at the Edmundston Campus at the same time as he was lining up with the Blizzard. He will continue his studies in Business Administration at the Moncton campus. In his last season with the Blizzard, he was awarded the Edupole Cup for the team’s student-player of the year.

Sam King also had a great season in Edmundston, tallying 26 goals and 30 assists (56 points) in just 38 games. He led the Blizzard with 7 power play goals. Had it not been for an unfortunate jaw injury that forced him to miss several games, he would probably have finished among the top five scorers in the Maritime Junior Hockey League (MHL) last season.

King will be enrolled in business at St. Mary’s University. “I’m super excited for the opportunity coming forward,” he said. “I know they are a strong group and I will be lucky to join them. University hockey is the next step in my career and will be yet again another adjustment I will have to make playing with older guys. I’m excited to get things going in the near future and take the challenge head on balancing school and hockey.”

Known for his speed and vision of the game, King was named Blizzard’s Most Valuable Player last spring. The MHL also honored King by designating him the character player of the year. In addition, King was selected on the league’s all-star team as a centreman.

Only one member of Maine’s congressional delegation had come out in favor of impeaching President Donald Trump ahead of House Speaker Nancy Pelosi’s Tuesday announcement that the Democratic-led House of Representatives would begin an impeachment inquiry.
Apex Weather END_OF_DOCUMENT_TOKEN_TO_BE_REPLACED

A strong upper-ridge anchored off the Southeastern US coast will bring warmer and more humid than normal conditions to the Valley through the late week period.
Campaign Corner END_OF_DOCUMENT_TOKEN_TO_BE_REPLACED

Dale Crafts filed his nomination papers for Feb. 21 with the Secretary of State to officially be placed on the primary ballot on June 9, 2020, for the U.S. House of Representatives 2nd District race.
Our Sponsors END_OF_DOCUMENT_TOKEN_TO_BE_REPLACED