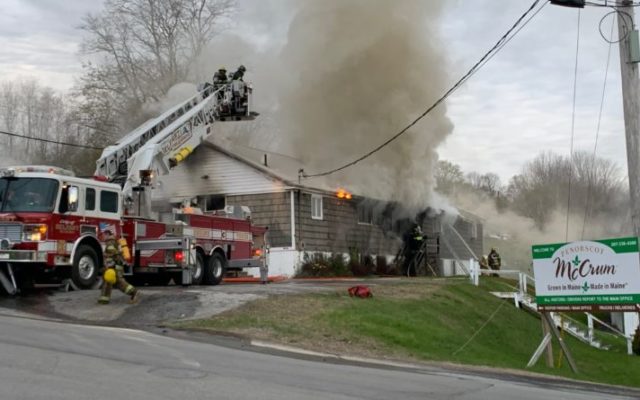 Lauren Abbate, BDN Staff • May 10, 2019
A fire that broke out Thursday night spared the Penobscot McCrum potato-processing plant in Belfast, but completely destroyed an office building used by the company, according to fire officials.

A fire that broke out Thursday night spared the Penobscot McCrum potato-processing plant in Belfast, but completely destroyed an office building used by the company, according to fire officials.

The only thing left of the office building Friday morning was the cellar, according to Belfast Fire Chief Jim Richards.

Fire crews were called to 28 Pierce St. around 6 p.m. Thursday after two women who were cleaning the office building reported seeing flames, Richards said. No one was injured in the fire, and the two women cleaning the building were the only people inside at the time of the blaze, he said.

Firefighters worked more than six hours Thursday night, Richards said. Ultimately an excavator had to be brought in to remove the roof so firefighters could better reach the fire. Crews from Searsmont and Morril assisted Belfast firefighters.

At no point during Thursday’s blaze did flames spread to the potato-processing plant ― where chemicals are stored ― just 60 feet or so away from the office building, Richards said.

It was not immediately clear where in the building the fire started, or how it was ignited, Richards said. Officials from the state fire marshal’s office were on scene Friday morning investigating the blaze.

A message left for officials at Penobscot McCrum was not immediately returned Friday morning.

Maine is more than eight months into Medicaid expansion under the federal Affordable Care Act and trends around who is enrolling and where they live are starting to emerge, bucking some expectations and pointing out access challenges.
Apex Weather END_OF_DOCUMENT_TOKEN_TO_BE_REPLACED

The North Atlantic high will break down at the end of the week allowing high pressure from the west to build in with drier conditions.
Campaign Corner END_OF_DOCUMENT_TOKEN_TO_BE_REPLACED

Dale Crafts filed his nomination papers for Feb. 21 with the Secretary of State to officially be placed on the primary ballot on June 9, 2020, for the U.S. House of Representatives 2nd District race.
Our Sponsors END_OF_DOCUMENT_TOKEN_TO_BE_REPLACED