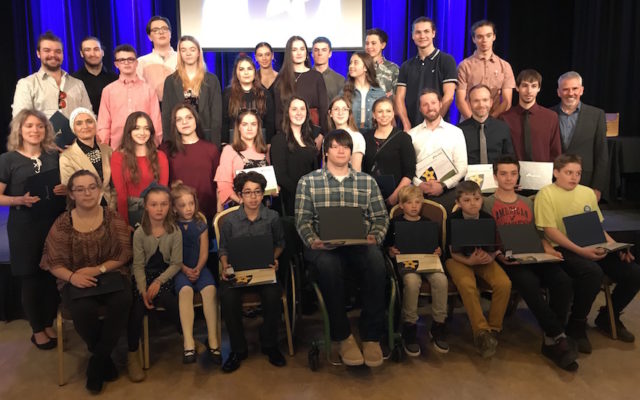 Contributed • May 8, 2019
At a special ceremony held on Sunday, May 5th, at the Edmundston Arts Centre, City Council recognized its new Community Stars in front of a packed hall.

EDMUNDSTON, New Brunswick — At a special ceremony held on Sunday, May 5th, at the Edmundston Arts Centre, City Council recognized its new Community Stars in front of a packed hall.

In recognition of the work and community involvement and outreach of citizens and organizations, Edmundston City Council presents the “Community Stars” recognition ceremony each year. This initiative allows the council to recognize citizens, organizations and events that are “stars” in the community.

This year, 42 “stars,” first highlighted at regular City Council meetings, have been recognized more formally. They are:

“Our community is animated by people who do not hesitate to get involved. There are also people who make their mark elsewhere and who are true ambassadors for Edmundston. They make our city shine and they are all real stars for our community, “explained Mayor Cyrille Simard.

Maine is more than eight months into Medicaid expansion under the federal Affordable Care Act and trends around who is enrolling and where they live are starting to emerge, bucking some expectations and pointing out access challenges.
Apex Weather END_OF_DOCUMENT_TOKEN_TO_BE_REPLACED

Dale Crafts filed his nomination papers for Feb. 21 with the Secretary of State to officially be placed on the primary ballot on June 9, 2020, for the U.S. House of Representatives 2nd District race.
Our Sponsors END_OF_DOCUMENT_TOKEN_TO_BE_REPLACED