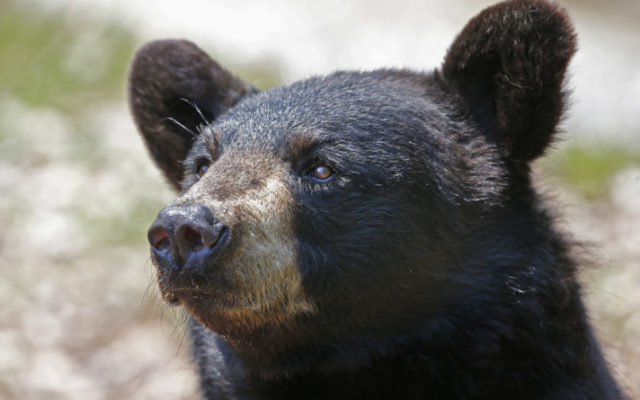 Nick Sambides Jr., BDN Staff • May 7, 2019
The first sign was the suet holders, set out to feed woodpeckers, that had been pulled from the trees. Then the bird feeders got crushed.

The first sign was the suet holders, set out to feed woodpeckers, that had been pulled from the trees. Then the bird feeders got crushed. From these clues, Eric and Lorna MacLaughlin deduced that they had some new visitors to their backyard in Ellsworth.

The larger one, whom they have named Big Amos, appears to weigh about 400 pounds. Eric’s hunter friends identified him as a male black bear by the shape of his snout and dark coat. The smaller bear, Ozzy — as in Osbourne — is more adventurous. He will lope into the yard during the day, while the larger one confines his visits to nighttime, but Ozzy darts up a tree if spooked, Lorna MacLaughlin said.

Bears like Amos and Ozzy are the reason Ellsworth and nearby Blue Hill have recorded some of the largest numbers in Maine for damage by bears this spring. Of the 38 reports the state Department of Inland Fisheries and Wildlife had received by May 1, four were in Blue Hill and three were in Ellsworth. Blue Hill tied with Kennebunk for the highest number of reports in a single town, said Jen Vashon, a wildlife biologist with the Maine Department of Inland Fisheries and Wildlife. Like Ellsworth, Biddeford also recorded three nuisance bear encounters.

Amos and Ozzy are harmless enough, if left alone, Lorna MacLaughlin said. She has recorded video of both with her cellphone and always makes sure that she keeps a considerable distance between herself and the wild creatures whenever she sees them.

“If we have a window open with the screen in, I will talk to them,” the 52-year-old MacLaughlin said Monday. “I have opened the door up before and stood on the doorstep and chatted with Big Amos. He sits there and looks at me, like, ‘Why are you bothering me?’”

Courtesy of Maine Department of Inland Fisheries and Wildlife
This graphic lists the annual number of bear sightings reported in Maine over the past several years.

Springtime bear sightings are common in Maine, as the bears end their winter hibernation and begin venturing for food. With the berries and other vegetation they eat not yet grown in, bears will pillage bird feeders and garbage cans, Vashon said.

“After living off their fat reserves all winter, they are hungry,” Vashon said.

Vashon gives the MacLaughlins points for staying clear of the bears, and removing bird feeders from their yard. She also recommended that the Ellsworth couple remove the ground feeder they use to feed squirrels.

Anything that conditions bears to seek food in human habitats will lead to bear attacks ― a rare occurrence — or bears becoming less likely to gather sustenance from natural sources. The last backyard bear attack in Maine that she heard of occurred in 2003 or 2004, when a teenager trying to get a picture got too close to a bear and her cubs, Vachon said.

“Bear conflicts will escalate as they get more brazen with each food reward,” Vachon said.

This time of year, bears feed on grasses and sedges near wetlands, including roots, tubes and bulbs of plants like skunk cabbage. Bears are opportunistic carnivores and will attack moose calves, deer fawns and small livestock, leading to complaints from backyard farmers.

Lorna MacLaughlin was not surprised to hear that Ellsworth and Blue Hill were among the areas where bears are most commonly reported. Her home on the 400 block of Main Street, and much of Blue Hill, is near large, dense forests. One neighbor used to feed bears regularly, she said.

Another area in Ellsworth where bears are common, MacLaughlin said, is near Northern Light Maine Coast Hospital.

Only one member of Maine’s congressional delegation had come out in favor of impeaching President Donald Trump ahead of House Speaker Nancy Pelosi’s Tuesday announcement that the Democratic-led House of Representatives would begin an impeachment inquiry.
Apex Weather END_OF_DOCUMENT_TOKEN_TO_BE_REPLACED

A strong upper-ridge anchored off the Southeastern US coast will bring warmer and more humid than normal conditions to the Valley through the late week period.
Campaign Corner END_OF_DOCUMENT_TOKEN_TO_BE_REPLACED

Dale Crafts filed his nomination papers for Feb. 21 with the Secretary of State to officially be placed on the primary ballot on June 9, 2020, for the U.S. House of Representatives 2nd District race.
Our Sponsors END_OF_DOCUMENT_TOKEN_TO_BE_REPLACED