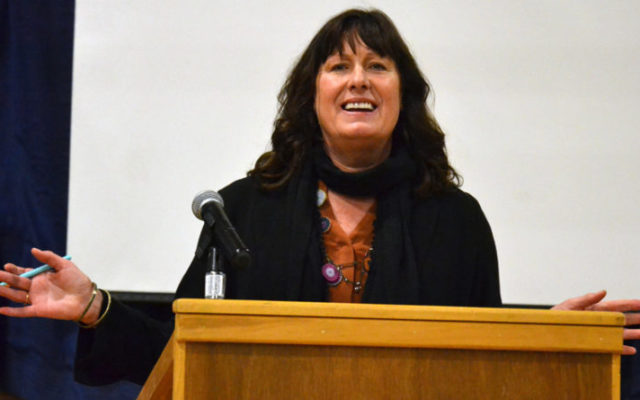 Education Commissioner Pender Makin looks to be pushing students toward early college programming, but a student and a guidance counselor said its end could lead to inequities for high-achieving students at schools with fewer course offerings, and a Republican legislator wants more information on the state’s decision to end the program.

The state is pushing early college options, but that isn’t a perfect substitute for the highly transferable Advanced Placement credits.In an email, Makin cited a difficulty in getting information about the AP4All program, which has run for 10 years and is administered under a contract with the University of Maine at Fort Kent. In comparison, she said there is “robust data” about early college programming in the university and community college systems, which 6,300 students participated in last year.

Advanced Placement — or AP — classes are created by the College Board, a nonprofit that administers standardized tests. If students get through a class and score high enough on a test, they get credits toward higher education that are widely accepted across the country.

A Department of Education spokeswoman said information provided by the College Board has been “limited.” She said 380 students began a course in the 2018 fiscal year, but 191 of them dropped it and it’s unknown how many completed it. Of those who did, 51 percent passed.

Mills, a Democrat, sharply increased education funding in her two-year budget proposal earlier this year and Makin said the department wants to increase funding for early college programs while creating a “web resource” that better points students to those programs.

However, those early college offerings are most valuable to students who will continue on in the state university or community college systems. They aren’t necessarily transferable to other colleges like AP credits are.

It makes the AP4All program valuable to students like Alexander Farkas of Pittston, a senior at Cony High School in Augusta who will study chemical engineering at the University of Pennsylvania, an Ivy League school, next year. He has taken 12 AP classes — eight at Cony, three through AP4All and the other one privately.

“It’s hard enough to get into these schools and rural Maine kids don’t need any more barriers,” he said.

The program was canceled without input from its administrators and a Republican legislator wants to consider alternatives to its cancellation. The decision to cancel the program was a quick one, with Scott Voisine, the dean of community education at the University of Maine at Fort Kent, saying it was done without consulting him. When Makin was unveiled as Mills’ education commissioner nominee, she said “students are so much more than their test scores.”

AP offerings are uneven around the state. While Bangor offers 19, smaller schools typically have only a few. At Madison Area Memorial High School, guidance counselor Dean Collins said declining enrollment during his tenure has reduced those offerings to just two.

One of the students who used the AP4All program is now at New York University and Collins said it was “very, very frustrating” to hear it was being canceled without counselors’ input.

Through a spokeswoman, Sen. Rebecca Millett, D-Cape Elizabeth, the co-chair of the Legislature’s education committee, said the panel hasn’t reviewed the decision and referred questions about the program to the department, which administers the program through a contract that lawmakers would have to find funding for if they want to preserve it.

Sen. Matt Pouliot, R-Augusta, who sits on the committee, said he wants the department to present more information about the program and consider alternatives, including payments that could provide “skin in the game” aimed at getting students to complete classes they enroll in.

Bills allowing most Maine employees access to paid sick leave and eligible MaineCare recipients access to abortions are scheduled to be voted on today in the Senate and House. The House will hold votes this morning on a bill from Rep. Jay McCreight, D-Harpswell, bill to require the state Department of Health and Human Services to provide abortion care coverage for low-income and eligible MaineCare recipients. It would also mandate that private insurance carriers include abortion services in their prenatal coverage plans. The controversial proposal, which seeks to supplant a possible federal ban on abortion funding by using state money to cover the cost, is opposed by Republicans and supported by Mills.

It’s one of several Democratic bills this session that seeks to equalize women’s access to sexual and reproductive health care. The health coverage committee is likely to vote this afternoon on another bill from Mills that seeks to increase the number of licensed medical professionals who can perform abortions in Maine. Tune in to the House here.

Another consequential bill backed by Mills is up for a vote in the Senate this morning. A Millett bill would require employers with more than 10 employees for more than three months a year to accrue one hour of leave for every 40 hours worked, and it would bar municipalities from enacting their own paid leave programs. City councilors in Portland voted down such a proposal Monday night. The proposal, though it’s diluted from Millett’s original version, would apply to 85 percent of Maine’s workforce and is more extensive than other states’ programs, because it would guarantee general paid leave for any reason.

The Senate is also scheduled to vote this morning on an emergency bill from Sen. Brownie Carson, D-Harpswell, that would require a net carbon emissions impact study of the proposed 145-mile transmission line through western Maine to send HydroQuebec power from Canada to Massachusetts. Mills has said she opposes the bill, but it’s not clear whether she will veto it if it receives the needed two-thirds majority to pass in both chambers.

Other bills before the Senate include one from Rep. Seth Berry, D-Bowdoinham, that will require at least 30 percent of state employees to begin teleworking by 2030 in order to reduce vehicle carbon emissions. Others bills up for votes in the Senate include one from Rep. Barbara Cardone, D-Bangor, to exempt from arrest or prosecution anyone who seeks medical assistance for someone else experiencing a drug-related overdose, and another from Rep. Charlotte Warren, D-Hallowell, that ensure comprehensive access to feminine products in Maine’s county jails and correctional facilities. Listen here.

— Sparring between congressional Democrats and the Republican president’s administration is escalating. On Monday, House Judiciary Committee Chairman Jerrold Nadler, D-New York, scheduled a vote this week to hold Attorney General William Barr in contempt of Congress after the Justice Department declined to provide the committee with a full, unredacted version of special counsel Robert Mueller’s report on Trump and Russia. The committee had given Barr until 9 a.m. Monday to comply. Meanwhile, President Donald Trump amplified his arguments that Mueller should not testify to Congress later this month and suggested that the investigation into Russian meddling in the 2016 election had cost him two years of his presidency. And Treasury Secretary Steve Mnuchin on Monday told a congressional committee that he would not turn over Trump’s tax returns.

— A singer who lives in Maine lost a chance for a lifetime achievement award because of domestic violence allegations. Don McLean announced Monday that he would receive the George and Ira Gershwin Award for Lifetime Musical Achievement, presented by the Student Alumni Association of the University of California, Los Angeles. But the Portland Press Herald reports that the award was rescinded after the association was told of a 2016 domestic disturbance involving the singer and his now ex-wife.

The line of succession to the British throne just got longer. Prince Harry and Meghan Markle welcomed a bouncing baby prince into the world on Monday.

I know we Americans are not supposed to care about an archaic, genetic-based, privilege-granting, largely symbolic monarchy that has been drenched for centuries by the blood of little people sacrificed in service to the king or queen. But I do. Maybe it’s because I’m an English major — or an avid fan of The Windsors, which you all really must watch.

The first big early question about the new royal is: What will they name him? I hope they go serious old school and dub him Canute or Aethelred the Unready II. If they want to be forward-thinking, Jamal has a nice ring to it, acknowledging the child’s American heritage.

— Will the child speak with a British or American accent?

— Will he call the game in which people kick balls and flop on the ground “soccer” or “football?”

— Will the heirs who have been bumped down the line of succession by his arrival conspire against him? Keep an eye on James Windsor, aka Viscount Severn, mostly because that title just sounds diabolical.

— Most importantly, will the folks at Gelato Fiasco revive all the delicious British-themed flavors (flavours?) that they rolled out for royal weddings?

Welcome to the world, Prince Whatever. Here is your soundtrack. — Robert Long

Only one member of Maine’s congressional delegation had come out in favor of impeaching President Donald Trump ahead of House Speaker Nancy Pelosi’s Tuesday announcement that the Democratic-led House of Representatives would begin an impeachment inquiry.
Apex Weather END_OF_DOCUMENT_TOKEN_TO_BE_REPLACED

A strong upper-ridge anchored off the Southeastern US coast will bring warmer and more humid than normal conditions to the Valley through the late week period.
Campaign Corner END_OF_DOCUMENT_TOKEN_TO_BE_REPLACED

Dale Crafts filed his nomination papers for Feb. 21 with the Secretary of State to officially be placed on the primary ballot on June 9, 2020, for the U.S. House of Representatives 2nd District race.
Our Sponsors END_OF_DOCUMENT_TOKEN_TO_BE_REPLACED