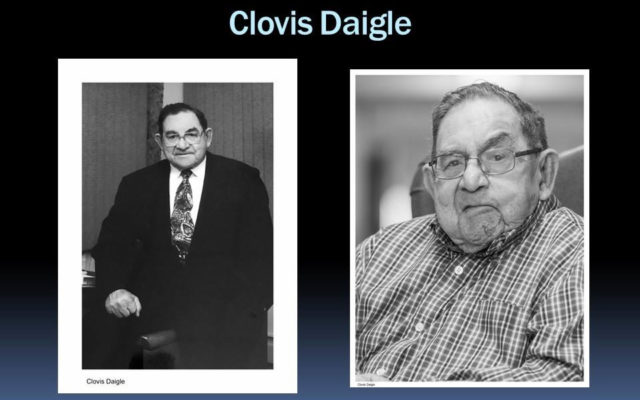 The 17th annual photography exhibit and celebration, titled “Remember ME” features the black and white photographs and biographies of citizens living in nursing homes and assisted living facilities statewide. Since its inception, the Remember ME program has recognized 602 long term care residents statewide. Residents ranging in age from 55 to 98 are decorated war heroes, mothers and fathers, and community leaders such as doctors, journalists, teachers, and small business owners.

Clovis Daigle, a resident at Forest Hill, was honored at the celebration for his life’s work.

The primary purpose of the Remember ME project is to salute the people who have spent the best years of their lives supporting their families, building their communities and serving their state and country. The project also urges the public, including lawmakers, to remember the selfless contributions of our elderly and disabled citizens who now depend on others for their care and safety.

According to MHCA Vice President and Communications Director Nadine Grosso, “Just because these residents are less visible in the community doesn’t mean that we should forget their important contributions to our state and country. After giving to others all of their lives, they now depend on us for their daily medical and social care and we take that responsibility very seriously. This photographic tribute and recognition ceremony is our way of remembering them and saying thank you.”

Brooke Saucier, Activities Coordinator at Forest Hill said, “Mr. Daigle’s life has been full of courage, commitment and dedication to his family, community and country.”

Born in Frenchville in 1922, Daigle was one of eight children. He grew up working on various farms and, while attending school, participated in sports. He enlisted in the Army in 1943 during World War II. He heroically served his country for two years as an infantryman on the front lines in Northern France and Germany during the Battle of the Bulge. After his military discharge, he returned to Frenchville where he met and married his wife, Lucille, in 1947. They raised two children, Mae (Hebert) and Ronald.

Daigle began his professional career as an employee of Romeo Roy Company, a wholesale plumbing and heating distribution company, where he would work for thirty-eight years. During the latter part of this career, he became involved in the development of St. Joseph Nursing Home in Frenchville. His hard work and dedication to long-term care during the formative years led to his eventual ownership of the facility. He became the full-time owner and administrator in 1987.

At 86, he retired after 40 years of successful ownership and administrative leadership.

Daigle has been described by those who worked with him as dedicated, kind, considerate, non-judgmental, fair, generous and neutral.

According to Saucier, employees and patients were not just a business to Daigle — he considered them his extended family. An active resident at Forest Hill, he enjoys monitoring the stock market and he is known to be awake, late at night, watching his favorite sports teams on television.

An intimate celebration with family and staff will be held at Forest Hill to celebrate Mr. Daigle’s recognition by the MHCA.

Only one member of Maine’s congressional delegation had come out in favor of impeaching President Donald Trump ahead of House Speaker Nancy Pelosi’s Tuesday announcement that the Democratic-led House of Representatives would begin an impeachment inquiry.
Apex Weather END_OF_DOCUMENT_TOKEN_TO_BE_REPLACED

A strong upper-ridge anchored off the Southeastern US coast will bring warmer and more humid than normal conditions to the Valley through the late week period.
Campaign Corner END_OF_DOCUMENT_TOKEN_TO_BE_REPLACED

Dale Crafts filed his nomination papers for Feb. 21 with the Secretary of State to officially be placed on the primary ballot on June 9, 2020, for the U.S. House of Representatives 2nd District race.
Our Sponsors END_OF_DOCUMENT_TOKEN_TO_BE_REPLACED