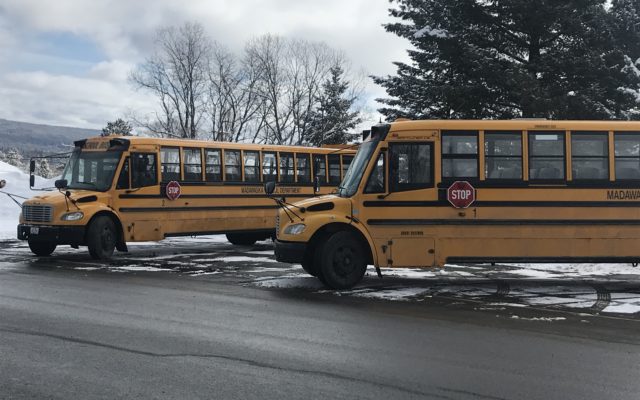 Morgan Mitchell • May 3, 2019
School bus fleets with the three school administrative units working together as Valley Unified will soon become mobile studyhalls with the addition of Wi-Fi access on the buses.

MADAWASKA, Maine — School bus fleets with the three school administrative units working together as Valley Unified will soon become mobile studyhalls with the addition of Wi-Fi access on the buses.

During the early stages of an application process for a $715,903 federal grant from the Fund for the Efficient Delivery of Educational Services, Vincent Vanier with the Madawaska School Department, Scott Carter with SAD 33, and AnnMarie Guerrette with SAD 27 were tasked with brainstorming creative ways to use the money to improve school resources.

“We thought [having Wi-Fi on the buses] was a good idea, especially since there are students who will spend more time” on them if a proposed regional high school is approved, according to Vanier.

Administrators and school board members from the Madawaska School Department and SADs 27 and 33 in the Fort Kent and Frenchville areas have been working together for about three years now to combine resources and save money in an effort to address declining enrollments and rising education costs.

Last year, the state authorized funding the Valley Unified effort up to $100 million for a new St. John Valley educational facility that would replace three high schools and serve students from Grand Isle to Allagash, a distance of about 60 miles.

Joined under the umbrella of the Valley Unified Regional Service Center, the three school administrative units, or SAUs, continue to move ahead with the site selection and design  process. Residents of the member communities will still need to vote to approve the project and the Maine Department of Education will need to OK plans moving forward.

In one of the complementary projects the three school administrative units worked on, officials decided to use funds from the FEDES grant they won to install Wi-Fi capability on the school buses.  Administrators negotiated to install the Kajeet SmartBus system, which will cost nearly $45,000 for equipment and 10 months of internet service on the buses, to “hopefully make student time a little more productive,” according to Vanier.

Kajeet has deployed its Wi-Fi system in about 230 bus fleets all over the United States, but the company’s first project in Maine was the new 2018 BlueBird transit bus that they equipped for Valley Unified school related field trips last fall, according to Julie Collett, business development executive for Kajeet.

It is uncertain if the far northern Maine schools will be the first in the state to give students Wi-Fi access to and from home and school each day. The Maine Department of Education does not keep track of such information and said providing internet access on buses is up to individual school districts, according to Kelli A. Deveaux, director of communications for the DOE.

“The first time I heard about this was from a school system in Vail, Arizona,” Vanier said about how the idea developed at Valley Unified. “The reasons they had implemented this was because the students were taking one hour bus rides each way to and from school, and because Vail High School [provides books and homework online], it became essential for them to get their work done and maximize their resources.”

Vail High School implemented the new technology in 2010, according to Matt Federoff, chief information officer for the Vail School District. The district collectively transports students more than 6,000 miles a day, with some students riding the bus up to two and a half hours a day.

“All of our work is digital, and all of our books are digital,” he said.

Federoff added that smartphones with data plans have made Wi-Fi less necessary, but that there are still some students in rural areas who might not have access to the internet, rendering the Wi-Fi in the bus important for those students.

Madawaska School Department Superintendent Gisels Dionne said in a school committee meeting on April 1, that some students use their cellphones as mobile hotspots to create their own wireless access while traveling on buses now.

“Some kids have data plans and already work on homework on the way home,” Dionne said. “But that’s not equal for every student. This will equalize everything.”

Vanier said the reasoning behind equipping all the buses is to “increase efficiencies in our systems and provide a baseline for all [Valley Unified] schools so they would all be equally equipped.”

Officials at the state Department of Education said they have not take a stance one way or the other concerning Wi-Fi capable buses.

“The decision to [provide] Wi-Fi enabled buses would be based on local determination of needs and purpose and available resources,” Deveaux wrote in an email. “The Maine Department of Education respects the capacity of communities and school leaders to make these determinations, and holds no opinion on the matter.”

Not only will the Valley Unified buses have Wi-Fi capability, but they will also be cued up for GPS tracking so school personnel can identify where a bus is on its route. Officials also will have the ability to limit access to websites and devices alike, should they so desire.

“The Wi-Fi student access is powered by Kajeet Sentinel, a cloud-based filtering system that enables the students to have a safe and reliable internet experience,” Collett wrote in an email.

The hardware devices are to be installed on top and inside each  bus, with antennas picking up signals from two separate cellular carriers. The redundancy is to ensure a signal should one carrier have issues. Vanier said school officials will go with U.S. Cellular for one carrier and with either Bell or Verizon for the other, through a data program with Kajeet.

Technicians already have installed equipment on one bus and are in testing phases, but said the outlook is positive. They expect the modems and antenna will be installed in the remaining 23 buses from the three school administrative units by the beginning of the next school year.

While Valley Unified will get Wi-Fi for the buses year round, they will only get billed for 10 months. Contract renewal for each 10-month increment will cost close to $10,000 per year for all of the buses included in the upgrade.

“If you can get one of the two signals, you”ll have Wi-Fi running on the bus,” Vanier said. “Making the most productive use of that time would be in the students best interest and this would be one way of doing this.”

High pressure will drift east today as a low pressure area and associated fronts moves towards the Valley from the west.
Our Sponsors END_OF_DOCUMENT_TOKEN_TO_BE_REPLACED