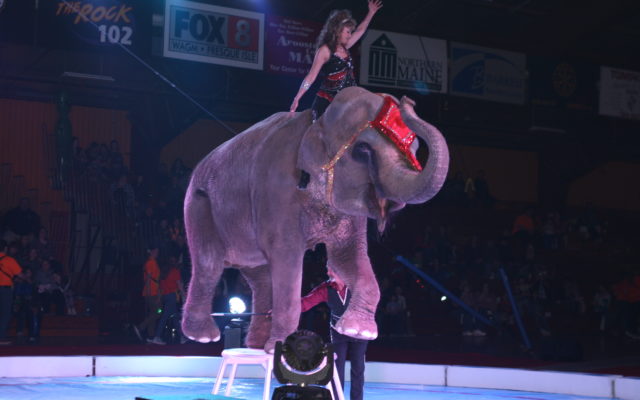 Melissa Lizotte • May 3, 2019
The Forum in Presque Isle welcomed hundreds of parents and children to the opening night of the 56th annual Anah Shrine Circus on Thursday, May 2.

PRESQUE ISLE, Maine — The Forum in Presque Isle welcomed hundreds of parents and children to the opening night of the 56th annual Anah Shrine Circus on Thursday, May 2.

There were the familiar acts with jugglers, elephants, dogs and the Anah Shrine Clowns. But this year the circus brought some new acts including motorcycle stunt riders, trampoline performers and the Chicago Boyz acrobatic team.

As families crowded into The Forum Thursday evening, many people took advantage of the opportunity to meet the Anah Shrine Clowns, who were on hand to sign autographs and have photos taken with them.

Circus officials also offered elephant and pony rides and the chance for children to take their pictures with Iron Ham, a 600-pound pig, which later appeared with a pig named Rosco and a group of dogs during the canine and swine revue. 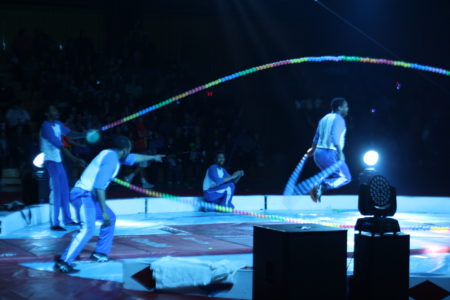 Ten-year-old Addyson Haley of Mapleton said that she was excited to attend the circus again and looked forward to going on an elephant ride.

“I like the dirt bikes,” she said, when asked about her favorite circus act.

Jessica Haley, Addyson’s mother, said that she watched many circuses as a child and is glad to pass on the tradition to her family. On Thursday, she and Addyson attended the circus with other family friends.

“It’s a nice activity for families to come to and enjoy together,” Jessica Haley said. “I’ve always liked the acrobatic acts.” 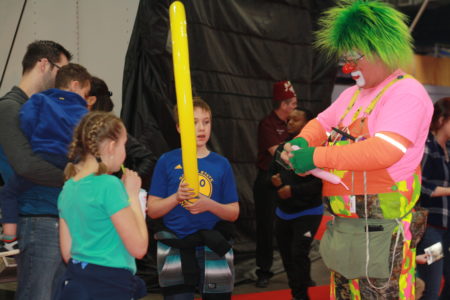 Camo the Clown ties a balloon for Addyson Haley, 10, of Mapleton, during an intermission of the Anah Shrine Circus in Presque Isle on Thursday, May 2.
(Staff photo/Melissa Lizotte)

The circus’ acrobatic performers provided much of the evening’s thrills, with the Chicago Boyz, who rose to fame on the reality show America’s Got Talent, impressing the audience with their high-flying jump rope skills. During their second act, the acrobats brought out the Anah Shrine Clowns to help create an even bigger human wall for the Boyz to fly over, flipping multiple times in the air before landing poised and on their feet.

Throughout the show, the clowns made many people laugh, once during an act that involved Fish the Clown and his broken-down clunker of a car, and even more during their “fashion show.” 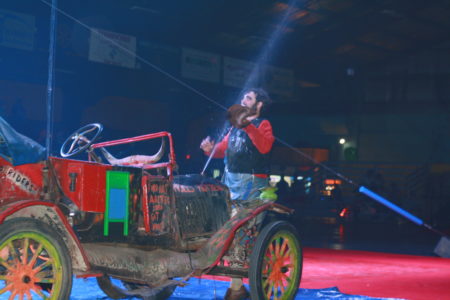 Fish the Clown gets sprayed by “oil” while trying to repair his car during the Anah Shrine Circus show in Presque Isle Thursday evening.
(Staff photo/Melissa Lizotte)

Circus chairman Jim Dwyer said that seeing the smiles on children’s faces as they interact with the clowns and animals and watch the performers in amazement has always been the best part of the event.

“I love seeing their eyes light up when they get excited,” Dwyer said. “That reminds us why we put on the circus — to help kids.”

The circus, produced by Circus United, serves as one of the Anah Shriners’ largest fundraisers of the year. Proceeds support the group’s philanthropy, including funding for the Shriners’ Hospitals in Boston and Springfield, Massachusetts, which treat children who have orthopedic, burn and spinal cord injuries. 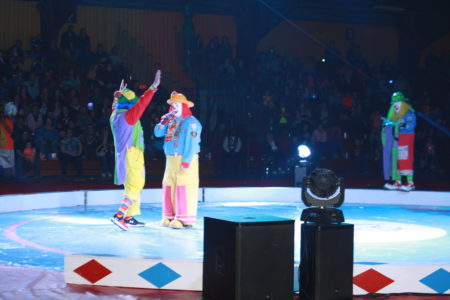 The Shrine Clowns share smiles during their “fashion show” portion of the Anah Shrine Circus in Presque Isle on May 2.
(Staff photo/Melissa Lizotte)

Typically the circus draws from 11,000 to 13,000 people each year throughout the weekend.

Folks still have a chance to see the Anah Shrine Circus in action. Shows will take place at 3 and 7 p.m. on Friday and at 10 a.m., and 2 and 7 p.m. on Saturday. Information on ticket sales can be found at https://www.facebook.com/AnahCircusPI/.

Only one member of Maine’s congressional delegation had come out in favor of impeaching President Donald Trump ahead of House Speaker Nancy Pelosi’s Tuesday announcement that the Democratic-led House of Representatives would begin an impeachment inquiry.
Apex Weather END_OF_DOCUMENT_TOKEN_TO_BE_REPLACED

A strong upper-ridge anchored off the Southeastern US coast will bring warmer and more humid than normal conditions to the Valley through the late week period.
Campaign Corner END_OF_DOCUMENT_TOKEN_TO_BE_REPLACED

Dale Crafts filed his nomination papers for Feb. 21 with the Secretary of State to officially be placed on the primary ballot on June 9, 2020, for the U.S. House of Representatives 2nd District race.
Our Sponsors END_OF_DOCUMENT_TOKEN_TO_BE_REPLACED