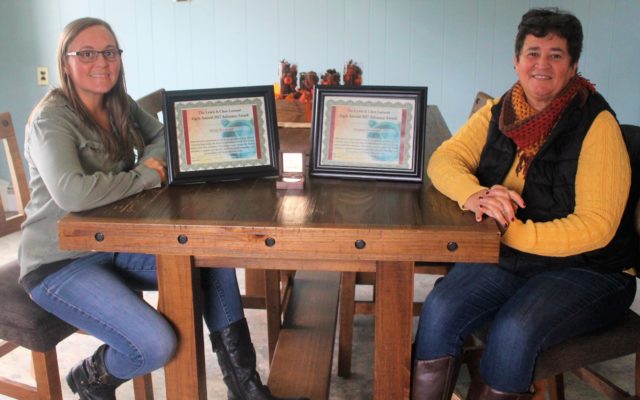 Jessica Potila, SJVT / FhF Staff Writer • April 30, 2019
When Suzanne Morneault and Mindy Forino, founders of the Eagle Lake based non-profit All Things Become New, organized their annual Spring Into Action fundraiser this year, they were not expecting such a fantastic result.

EAGLE LAKE, Maine — When Suzanne Morneault and Mindy Forino, founders of the Eagle Lake based non-profit All Things Become New, organized their annual Spring Into Action fundraiser this year, they were not expecting such a fantastic result. 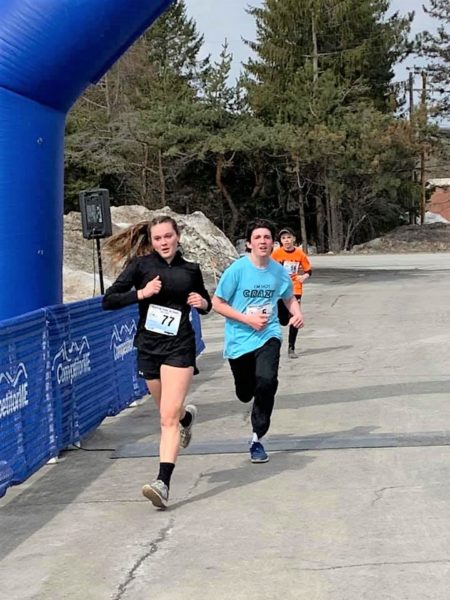 Competitors cross the finish line during the Spring Into Action Walk/Run fundraiser for All Things Become New on Saturday, April 13, in Fort Kent. (Courtesy of Suzanne Morneault)

The mother and daughter planned to use money raised from the walk/run fundraiser to help pay the mortgage on their Haven of Rest home, which they opened in 2017 to provide free respite to caregivers of people with brain injuries.

Instead, the April 13 race brought in slightly more than the $40,000 needed to pay off the whole mortgage for the Eagle Lake home.

Forino and her mother, Suzanne Morneault, founded All Things Become New after Forino suffered a traumatic brain injury while playing soccer as a University of Maine at Fort Kent student athlete in 2010. The organization was created to provide support for people such as herself with brain injuries and their caregivers. They also owner financed the purchase of the home.

Donations and registration fees for the race itself raised $15,190, and the following  Tuesday, Morneault received a phone call from an out of state couple who donated an additional $25,000 to the effort but wished to remain anonymous, according to Morneault.

“(The anonymous donors) believe in the mission of our Haven of Rest and expressed how they wanted to help us get a good start to our ministry by being debt free,” said Morneault. “We were so excited for their willingness to help and for all of the community support we received both financially and from local businesses and individuals because of many generous donations.”

When the Haven of Rest home has empty space, Morneault and Forino sometimes allow others to stay there, including families whose children are being treated at the inpatient psychiatric unit at Northern Maine Medical Center. Due to a lack of such treatment centers in the state, children from all over Maine stay at the NMMC unit, making travel and lodging arrangements difficult for their families.

“We continue to be on a call’s notice for Northern Maine Medical Center; they have families traveling to the area for visits with their children,” Morneault said. “We recently hosted a group of veteran ladies who needed some rest and recreation. One of the ladies who has had many different struggles since she has retired from the military told us how she felt safe in our Haven of Rest. We have had people come and take a break from all their medical care and it has been a pleasure to see them relax.”

Forino, 32, still deals with the aftermath of her traumatic brain injury, including having difficulty adapting to social situations — noise, light and even smells can cause her distress. She has also endured frequent seizures over the years.

However, she has since married and she and her husband John Forino are expecting twin daughters this summer.

“She is so excited. She talks to both babies and we go for ultrasounds often because they share a placenta so they monitor it a lot so she gets to see them often and she is just in love with them and can’t wait to hold them,” Morneault said.

Morneault added that Forino’s condition appears to have improved since becoming pregnant.

“She’s the healthiest that she has been since her accident. She hasn’t had one seizure her whole pregnancy which we are very happy about,” Morneault said. “I think about two babies coming at once and I feel tired and old but I know that we will be able to love both those babies and give them the care they need.”

In recognition of their efforts, the Brain Injury Association of America-Maine awarded Forino and Morneault the Lewis and Clara Lamont Brain Injury Advocacy Award last October.

“My family and I want to personally thank everyone who has made our dream a reality,” Morneault said. “The next step for our organization is to begin working on the needed funds to buy a home in Portland for people to stay in for long term outpatient head injury related care.”

“Feel free to reach out to us for anything; we would love the opportunity to help,” Morneault said.

Canadian high pressure building down from the northwest sends us some more frigid air for the late week period.
Crown Politics END_OF_DOCUMENT_TOKEN_TO_BE_REPLACED

Three candidates are vying for two seats on the Fort Kent Town Council. Voters will decide which of the three -- Corey Pelletier, Brandon Dayton or Andrew Caron -- will get a seat during the town’s annual election on Monday, March 22.
Our Sponsors END_OF_DOCUMENT_TOKEN_TO_BE_REPLACED