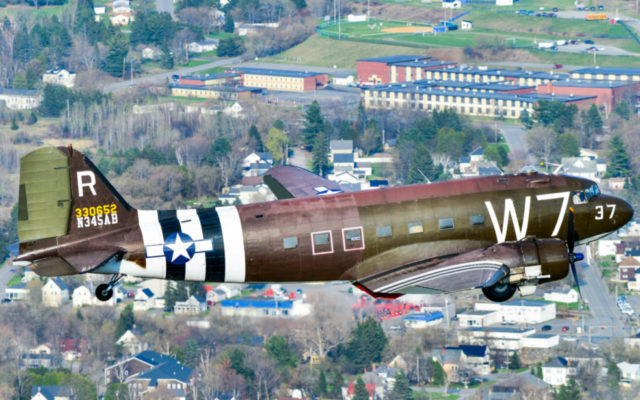 Contributed • April 28, 2019
A squadron of 10 to 12 C-47 aircraft will fly in to Presque Isle on Sunday, May 19, for a short layover on their way to France to take part in the 75th anniversary of D-Day, announced officials at the Presque Isle Air Museum.

PRESQUE ISLE, Maine — A squadron of 10 to 12 C-47 aircraft will fly in to Presque Isle on Sunday, May 19, for a short layover on their way to France to take part in the 75th anniversary of D-Day, announced officials at the Presque Isle Air Museum.

The planes will land at Presque Isle International Airport in the area of the old general aviation terminal, weather dependent, at around 11 a.m. and will stay on the ground for approximately two hours.  The public is invited to be a part of this historic flight as it takes part in the D-Day festivities.

Parking for the event will be in the Coca-Cola plant lot at 1005 Airport Drive with Presque Isle Historical Society’s Molly the Trolley providing free shuttle rides across to the plane viewing area.

D-Day, or June 6, 1944, represents the day that many historians say was the turning point in World War II.  On that day, more than 160,000 Allied troops landed along a 50-mile stretch of heavily fortified coastline in Normandy, France, to fight Nazi Germany. The Allies suffered 10,000 casualties, including 2,500 deaths that day.

Designed and manufactured in California and Oklahoma, the C-47s first flew on Dec. 23, 1941.  Only 10,147 of these were built. During World War II, the armed forces of many countries used the C-47 and modified DC-3s for the transport of troops, cargo and wounded.  The C-47 was instrumental in the success of many Allied campaigns as this aircraft made it possible for Allied troops to counter the mobility of the light-travelling Japanese Army.

The United States Air Force‘s Strategic Air Command had Skytrains in service from 1946 through 1967. The US Air Force’s 6th Special Operations Squadron was flying the C-47 until 2008.  In fact, several C-47 variations were used in the Vietnam War by the US Air Force.  After World War II, thousands of surplus C-47s were converted to civil airline use, some remaining in operation in 2012, as well as being used as private aircraft.

The Presque Isle Air Museum, located at the south end of the Presque Isle International Airport terminal, will also be open for tours during the event.  This year represents the 20th anniversary of the museum, which plans more events later in the summer.

For more information, contact the museum by email at piarimuseum@hotmail.com.

Only one member of Maine’s congressional delegation had come out in favor of impeaching President Donald Trump ahead of House Speaker Nancy Pelosi’s Tuesday announcement that the Democratic-led House of Representatives would begin an impeachment inquiry.
Apex Weather END_OF_DOCUMENT_TOKEN_TO_BE_REPLACED

A strong upper-ridge anchored off the Southeastern US coast will bring warmer and more humid than normal conditions to the Valley through the late week period.
Campaign Corner END_OF_DOCUMENT_TOKEN_TO_BE_REPLACED

Dale Crafts filed his nomination papers for Feb. 21 with the Secretary of State to officially be placed on the primary ballot on June 9, 2020, for the U.S. House of Representatives 2nd District race.
Our Sponsors END_OF_DOCUMENT_TOKEN_TO_BE_REPLACED