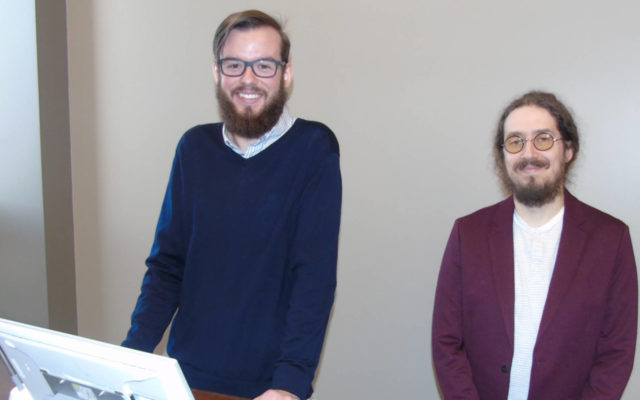 Contributed • April 24, 2019
André Bernier, soon to graduate with a bachelor of multidisciplinary arts from the University of Moncton, plunged into the old memories of the Second World War (1939-1945) trying to know the perceptions experienced by the people of Madawaska County.

EDMUNDSTON, New Brunswick — André Bernier, soon to graduate with a bachelor of multidisciplinary arts from the University of Moncton, plunged into the old memories of the Second World War (1939-1945) trying to know the perceptions experienced by the people of Madawaska County.

Bernier, of Grand Falls, presented his brief to the public on April 12 at the Rhea-Larose Library at the University of Moncton, Edmundston Campus (UMCE). Entitled “Madawaska during the World War, Forgotten Perceptions,” the presentation was supervised by Julien Massicotte, a history professor at UMCE.

Due to the large geographical distance and a rather discreet outreach effort, very few Madawaska residents, according to Bernier, took part in the biggest bloody conflict in the history of the world (between 50 and 85 million deaths, historians estimate). Madawaska is located far from the boarding point to a war being fought mainly in Europe.

In everyday life, the war seemed of little effect in the conversations among the inhabitants of the territory, probably because of communication networks that were much slower then and now. Only the weekly Le Madawaska devoted texts and assessments of the Allied efforts. The intellectual and clerical elite had almost no knowledge of the subject, Bernier found.

“The people of Madawaska [were] ignorant in general events in Europe, except for the few families who had a soldier at the front. We perceived the war as an economic way out of the misery of the 1930s Certainly, the reality of the conflict was far less romanticized in the territory of Madawaska than what is shown in some sources elsewhere,” analyzed Bernier, who will graduate on 18 May from UMCE.

Only one member of Maine’s congressional delegation had come out in favor of impeaching President Donald Trump ahead of House Speaker Nancy Pelosi’s Tuesday announcement that the Democratic-led House of Representatives would begin an impeachment inquiry.
Apex Weather END_OF_DOCUMENT_TOKEN_TO_BE_REPLACED

A strong upper-ridge anchored off the Southeastern US coast will bring warmer and more humid than normal conditions to the Valley through the late week period.
Campaign Corner END_OF_DOCUMENT_TOKEN_TO_BE_REPLACED

Dale Crafts filed his nomination papers for Feb. 21 with the Secretary of State to officially be placed on the primary ballot on June 9, 2020, for the U.S. House of Representatives 2nd District race.
Our Sponsors END_OF_DOCUMENT_TOKEN_TO_BE_REPLACED