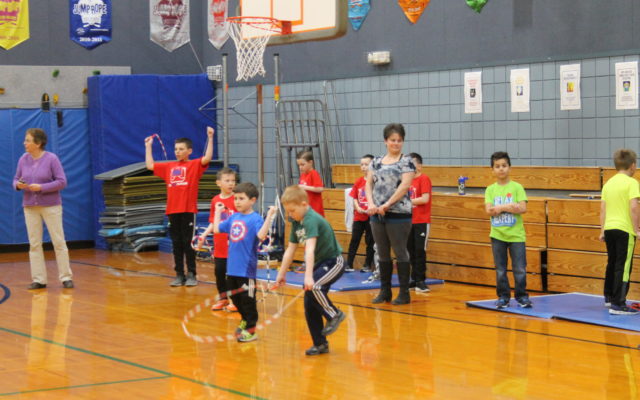 Morgan Mitchell • April 18, 2019
The Madawaska Elementary School gym was filled with students participating in the Jump Rope for Heart fundraiser for the American Heart Association the morning of April 11.

MADAWASKA, Maine — The Madawaska Elementary School gym was filled with students participating in the Jump Rope for Heart fundraiser for the American Heart Association the morning of April 11.

Coach Dan Cyr  has been hosting the Jump Rope for Heart fundraiser at the school for the last 20 years.

“I’ve been doing this since 1999 and we’ve been very successful here at Madawaska,” Cyr said. “The whole reason we do this is for the American Heart Association to help fight heart disease and strokes.”

The event allowed students from second to sixth grade to jump rope for 30 minutes (with breaks in between) to promote health and collect on the pledges they solicited in the preceding weeks. During the event, the students got in groups of five or six, and, two at a time, would jump rope for five minutes and then rest for 10 minutes.

Each year, the students learn jump rope skills and about helping out in the community. They raise money for the cause while learning how to develop heart-healthy habits like being physically active.

“The children really benefit from it both physically and socially,” Cyr said. “And they learn responsibility and they really have fun doing it.” 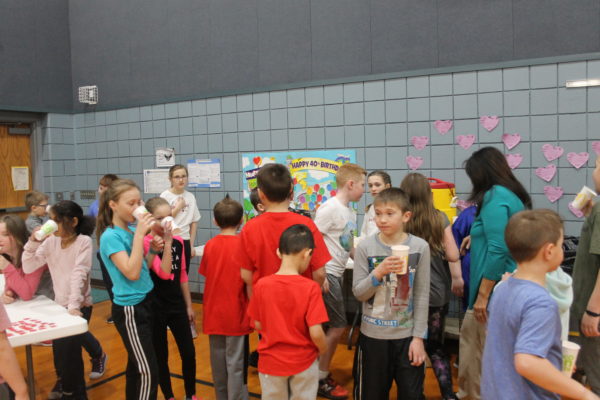 These students take a much needed water break following their turn at the jump rope during the Jump Rope for Heart event in the Madawaska Elementary School gym on April 11. The fundraiser benefits the American Heart Association. (Morgan Mitchell | SJVT/FhF)

The program includes several incentives, such as toys and plushies, for the students to earn as many donations as possible, but Cyr also gives away door prizes at the event each year and holds pizza parties for the teams who raise the most. This year, the students at Madawaska Elementary School raised more than $9,000 for the American Heart Association.

Last year, Nicholas Poitras, now a seventh-grader at Madawaska Middle High School, received a special award for raising more than $7,000 in donations for the association over a three year span. Last year was his last participating in Jump Rope for Heart — at the elementary school level. This year, Poitras was invited back to participate and run the clock for the younger students.

“I helped raise money for Jump Rope for Heart even though I am too old to do it,” Poitras said. “Coach Cyr let me do it. I wanted to help. It brings me joy to help people.”

Poitras raised a sizeable chunk of change this year totaling $1,000 by going out into the community and asking for pledges as well as utilizing the online system for collecting donations.

“I went out and worked hard,” he said. “I just hope this will help kids with heart disease.”

Only one member of Maine’s congressional delegation had come out in favor of impeaching President Donald Trump ahead of House Speaker Nancy Pelosi’s Tuesday announcement that the Democratic-led House of Representatives would begin an impeachment inquiry.
Apex Weather END_OF_DOCUMENT_TOKEN_TO_BE_REPLACED

Dale Crafts filed his nomination papers for Feb. 21 with the Secretary of State to officially be placed on the primary ballot on June 9, 2020, for the U.S. House of Representatives 2nd District race.
Our Sponsors END_OF_DOCUMENT_TOKEN_TO_BE_REPLACED