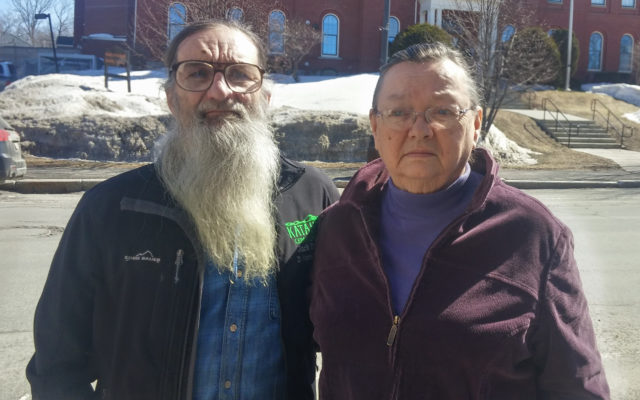 Joseph Cyr • April 18, 2019
Volunteering in the community is an essential component of daily life for Jack and Ruth Doughty of Island Falls.

ISLAND FALLS, Maine — Volunteering in the community is an essential component of daily life for Jack and Ruth Doughty of Island Falls.

The couple have been involved with the Retired Senior Volunteer Program, or RSVP, for the past few years. They were introduced to the program by one of their good friends, Bonnie Pratt. The Doughtys met Pratt while taking a Matter of Balance class from her and the three immediately hit it off.

Ruth, a registered nurse who most recently worked for Nature’s Classroom, an outdoor education program in Ocean Park, near Old Orchard Beach, was so intrigued by the Matter of  Balance program that she has since become an instructor. Jack also followed suit.

“Service to other people is our life,” Ruth said.

Jack, 65, was born in Boothbay Harbor and graduated from Portland High School in 1973. Ruth, 70, was born in Bellows Falls, Vermont, and lived in that state for a number of years before relocating to southern Maine.

Jack moved to Aroostook County with his first wife, Dolly, who worked for the Maine Department of Motor Vehicles in Portland. Her supervisor’s parents owned a home in Island Falls and after they passed away, he was looking to sell it.

“I bought the house and all of the contents for $11,000 and we moved to Island Falls” Jack said. “I’ve been there ever since.”

Dolly died of cancer in May 2011 and about a year later, he married Ruth. The Doughtys have been together for nearly eight years, but have known each other for much longer. The two first met 48 years ago at Jack’s brother’s wedding.

“I was good friends with Jack’s brother (Earle) and his wife (Lottie),” Ruth said. “We would go horseback riding in Sherman. It was just beautiful.”

Jack retired last year after 21 years of work at Katahdin Forest Products. “I did most every job there was that needed to be done,” he said.

Aside from volunteering their time to teach Matter of Balance courses for fellow seniors, the Doughtys also volunteer at the Wildlife Management Area in Limestone. They assist with trail maintenance, helping clear trails of limbs and debris.

They both also work with the Retired Seniors Volunteer Program, assisting with the St. Mary of the Visitation Church’s food pantry in Houlton. In addition, Jack is a deacon and Ruth a deaconess with the Oakfield Seventh-Day Adventist Church.

“Volunteering gives us a chance to give back to the community,” Jack said. “You get to meet so many new people.”

“While it is important to give back, we have also had a lot of fun doing it,” Ruth added.

In  his spare time, Jack likes to collect stamps and coins, which is something he has done since he was young, while Ruth prefers to grab a blank canvas and a paintbrush to put her artistic skills to work. The two both love to fish, but are not fans of ice fishing due to the cold temperatures.

“We really have a lot of fun,” Ruth said. “We don’t like to be bored, so we always stay busy.”

Only one member of Maine’s congressional delegation had come out in favor of impeaching President Donald Trump ahead of House Speaker Nancy Pelosi’s Tuesday announcement that the Democratic-led House of Representatives would begin an impeachment inquiry.
Apex Weather END_OF_DOCUMENT_TOKEN_TO_BE_REPLACED

High pressure will bring mostly clear to partly cloudy skies to northern Maine today and tonight as low-pressure slides east of the region in the southern part of the state.
Campaign Corner END_OF_DOCUMENT_TOKEN_TO_BE_REPLACED

Dale Crafts filed his nomination papers for Feb. 21 with the Secretary of State to officially be placed on the primary ballot on June 9, 2020, for the U.S. House of Representatives 2nd District race.
Our Sponsors END_OF_DOCUMENT_TOKEN_TO_BE_REPLACED