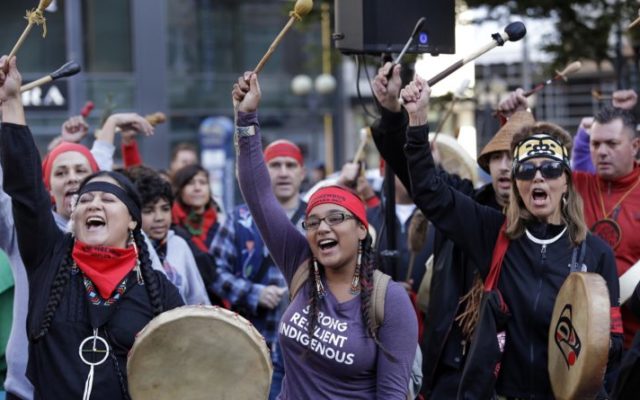 Alex Acquisto, The Forecaster • April 18, 2019
A bill to officially change the name of Columbus Day to Indigenous Peoples Day in Maine received final approval from the Senate on Thursday, paving the way for it to become law.

A bill to officially change the name of Columbus Day to Indigenous Peoples Day in Maine received final approval from the Senate on Thursday, paving the way for it to become law.

The bill from Rep. Ben Collings, D-Portland, will change the name of the holiday that dates back to the 1930s and falls on the second Monday in October. While Indigenous Peoples Day will be observed in Maine, the name of the federal holiday will remain Columbus Day.

Maine will become the eighth state to make the change, spurred by Democratic lawmakers’ desire to disassociate the state from historic gestures of cultural assimilation and violence against the country’s early Native American inhabitants, perpetuated by Italian explorer Christopher Columbus and other early European settlers.

“I greatly respect the history of the Italian-Americans and their contribution, however, I think we can honor their presence here without this day, which really isn’t fitting,” Collings said in February.

Former Penobscot Nation Chief Barry Dana, who supports the holiday name change, said, “Maine has not addressed its relationship with Maine’s first people. This would be a way of doing that.”

After the Senate vote Thursday, Oami Amarasingham, policy director for the American Civil Liberties Union of Maine, said, “It’s time to stop celebrating a man whose arrival brought death, disease and slavery to hundreds of thousands, and start honoring the people who lived here long before.”

The bill will now be sent to Gov. Janet Mills to be signed into law. Her administration previously indicated support for the change.

Only one member of Maine’s congressional delegation had come out in favor of impeaching President Donald Trump ahead of House Speaker Nancy Pelosi’s Tuesday announcement that the Democratic-led House of Representatives would begin an impeachment inquiry.
Apex Weather END_OF_DOCUMENT_TOKEN_TO_BE_REPLACED

A strong upper-ridge anchored off the Southeastern US coast will bring warmer and more humid than normal conditions to the Valley through the late week period.
Campaign Corner END_OF_DOCUMENT_TOKEN_TO_BE_REPLACED

Dale Crafts filed his nomination papers for Feb. 21 with the Secretary of State to officially be placed on the primary ballot on June 9, 2020, for the U.S. House of Representatives 2nd District race.
Our Sponsors END_OF_DOCUMENT_TOKEN_TO_BE_REPLACED